an unreleased song that was recorded in the early 1980s

News from Cordial Records all about their next upcoming 45 release and an interview with Darnell Summers (brother of Bill) from the group Afrodisia.

First off is news that being released very soon (18 Nov 2017) is an unreleased single by Afrodisia (details below) followed by both an unreleased album and a re-issue of their previous album.


AFRODISIA  - Malik  - Cordial - CORD 7004
‘Malik’ is an unreleased song that was recorded in the early 1980s and features legendary percussionist Bill Summers & internationally renowned guitarist Michael Koschorreck amongst the players. The sprightly jazz dancer keeps the pressure high with a strong lead which culminates with a series of male and females harmonies to die for at the end. For the first time ever ‘A Fool No Longer’ is now available on 7″ vinyl after originally being included on a German rock compilation in 1981.

B – A Fool No Longer

Cordial Records have also pushed out an interview with Darnell Summers, a preview follows below along with a link to the interview in full

an interview with Darnell Summers

Afrodisia were a band that formed in Worms, Germany in 1978 and ran through to the mid-1980s. The band’s leader was Darnell Stephen Summers and was formed featuring a cross collective of US Germany based soldiers and local German musicians. They released one album ‘Elephant Sunrise’ in  1980 on Comma Records which features the phenomenal ‘Sugar Free.’ We are proud to be re-releasing this album in March 2018.  Cordial Recordings will also be releasing an unissued album from 1981 towards the end of 2018, which features ‘Malik’ the first single from the group. On the flip for the first time on 7″ vinyl is the soulful funk bomb in ‘A Fool No Longer,’ which was originally featured on rock compilation ‘Rock Aus Der Alten Schule’ in 1981. We interviewed Darnell to capture the history of himself and the band.

Darnell you were born in Detroit, but which year were you born?

I was born in July 1947 in Detroit, Michigan. What’s interesting is that it’s a couple of miles from the Ambassador Bridge and the Ambassador Bridge goes over the river to Canada. Had my mother just gone across the bridge I’d be Canadian. Detroit is a border town and I didn’t recognise the significance of that until actually just recently what kind of dynamics are involved in being a border town. Certainly in retrospect when I think about my early life the fact that we lived near the border with Canada played a very significant role in my life.

Are you the eldest?

Did your parents introduce you to music?

Yes initially. My mother, she had a plan on how she wanted to educate her children. She’s from Louisiana, a place that’s rich with musical history. She did not want her children to grow up in the Jim Crow segregated south. That’s what motivated her to come up to Michigan. My father came up first and she followed him. She had a plan and part of that plan was I guess was undoubtedly give us a good cultural education. We were fortunate to go to a private Catholic school and get an academic education. My brother and I were lucky to learn the piano during those years.

When was Bill’s introduction to percussion?

That’s a good question! There was a guy by the name of Emmet, I don’t remember his last name. We moved from Detroit in the early 60s to the suburbs and a place called Inkster. We moved into a new house and we had a fireplace there in the family room. My brother was friends with a guy by the name of Emmet and Emmet had a penchant for going to house parties and bringing his bongos along. He was friends with my brother. One day I noticed that my brother had a pair of bongos’ right there at the fireplace. Emmet must have had a tremendous impact on him. I think that it was at that point we were in our early teens, maybe a little bit earlier, maybe my brother was 13 or 14. I just remember those bongos being on the fireplace. Bill played the piano, but he got into playing the flute, that’s another long story. He got so good that he was going out to the clubs of Detroit and playing underage in the clubs with a couple of other underage guys from the neighbourhood. I used to drive him around. He became a pretty good player playing the flute. He had good success at doing that while in High School. To make a long story short after High School he went out to California and continued to play the woodwinds. He picked up the saxophone also and continued to play the flute. From there he went on to New York to play on some recordings with the Bar Kays. He had his instruments in his car and somebody broke in to steal his instruments. From that point onwards he went into percussion 100% that’s how I understand the story. It wasn’t until the 70s when he concentrated on being 100% a percussionist.

Did you ever play together in a group?

Not until I came to Germany and formed my own group. I’m trying to think now. Had we ever played together, no we hadn’t. We didn’t collaborate together until around 1980 when Afrodisia were doing an album, which was our second album or what we wanted to be our second album. He’d already had success with the Headhunters and all of that. He came over and we asked him to play on the record, which he did. That was the first time that I had the experience and pleasure of collaborating with my brother on a joint project. After that he played with my band and I also accompanied him on certain projects that he had.

Full interview can be read via 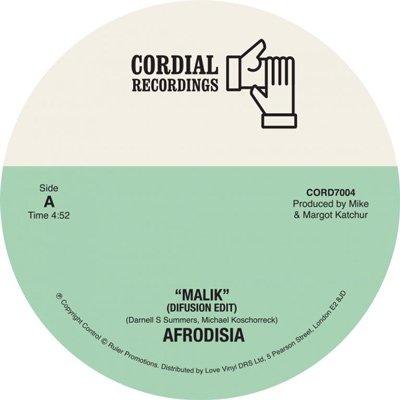