Bobby Parker - Soul Of The Blues - Cd and Lp

Bobby Parker - Soul Of The Blues - Cd and Lp

The below links will take you to the site of Rhythm and Blues Records who have just made available the wonderful recordings that Bobby Parker left behind. Bobby died seven years ago now and did not leave us that many recordings. Not only was he under-recorded, but most of what he did went unreleased in the UK.

In spite of having a career that spanned more than fifty years, this new issue represents the very first vinyl album by Bobby Parker.
The seventeen tracks cover most of his singles from the 50s and 60s.

The expanded 2cd pack with fifty plus tracks unearths these and more gems from obscurity. All his known issues are here including his significant contributions to others` work.   The largely chronological sequence follows his path through big band R&B ,  guitar-led rock, pleading soul and the ever-present blues. Nearly all the music here is from the 50s-60s-70s.......but a bonus is the inclusion of a U.S. radio show from the `90s when after a spell of retirement from music, he came back to form a regularly working blues band.

Just to clarify for the widely-knowledgeable Soul Source readers: This is the Bobby Parker of "Watch your Step" and "You got what it takes " fame.  We are not talking about Robert "Barefootin` " Parker of New Orleans ...nor even Bobby Parker of Los Angeles soul group the Hi Tensions. And certainly not about the Bobby Parker who recorded countless vanity poems as songs for the Hollywood Artists label.

"Watch your Step" was made in 1961 and was a hugely influential record to the UK from the world of black music. It was issued here on both London American and Sue labels. It was widely played on pirate radio which was challenging the limited exposure of pop from the BBC.....and also at the all-nighter and Northern Soul clubs springing up in places outside London. The song was also prime material for the new style groups like the Beatles and Stones to rehash   American R&B for us. And that was the only 45 that Bobby got released in UK. If you have never heard it , the screaming vocal and over-amplified guitar will take you to a new place.

One other familiar Bobby Parker song was "You got what it takes" - the Marv Johnson million-seller..............not that you would know it, because mysteriously the writers` credit was " given to "Gordy, Gordy and Davis". Bobby had earlier made it for Vee Jay in 1957 and spent the rest of his life telling people how they stole it, but he never could afford the expensive lawyers necessary to get him his fair dues.

You have heard of Little Bobby Parker from the Shrine issue. This is our man. And you may even be aware of the superb deep soul songs "It`s too late" and "Don`t drive me away " - made for Sabu and Frisky...two labels that each sported just three 45s in their short existence. Another soul masterpiece included here is Nat Hall`s Loop 45 of "Why (I want to know)"/"You don`t know (just how I feel)"which Bobby produced. That one last sold in auction for £1500 +.


Bobby operating out of Washington DC, seemed to specialise in finding labels without much more than local distribution. In his late life, Bobby was reluctant to see these records he had made as a young man re-released. As his own manager, he did not want to give potential bookers the impression that this was the act they would be booking.  Into his 70s, he was not dropping to his knees and screaming in James Brown fashion. It is surely not now a bad thing to let people enjoy his talent and hear these performances.

One thing he did not lose was his skill with the guitar. As a blues guitar player he was in the top bracket with the Kings, Buddy Guy,Albert Collins ,etc .  His playing was always recognisable and different. The cds are littered with Bobby`s unique contributions to the Nat Hall, Maskman and Billy Clark 45s and others included ......And for Bobby thirty years later, check out his appearance at the Monterey Festival with Santana and Buddy Guy on the great Eagle Rock DVD. 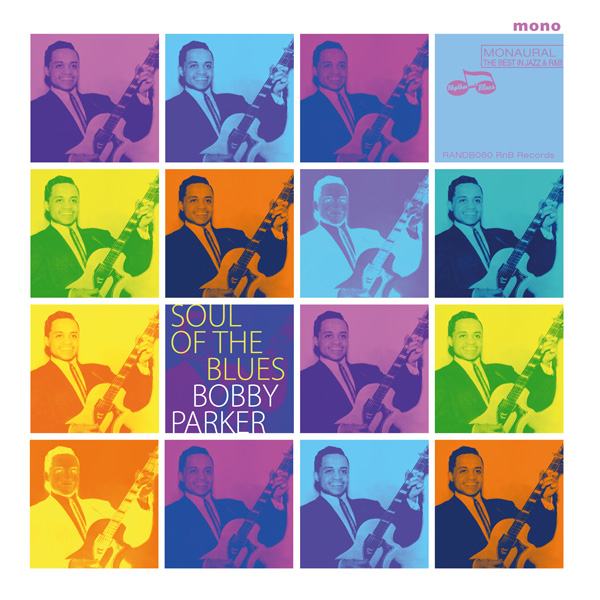 Virtuoso blues guitarist Bobby Parker inspired John Lennon, Eric Clapton, Carlos Santana, Jimmy Page and many others yet it has taken 66 years since his recording debut for a proper compilation to be issued under his name. The one you all know, Watch your Step was played on stage by the Beatles in their Hamburg days who by their own admission, took its riff to fashion the opening to I Feel Fine. And let’s not forget Led Zeppelin’s Moby Dick, which borrowed that same riff. What a great soulful blues singer Bobby Parker was too. From his 1956 recording of Titanic, to 1969’s It’s Hard But It’s Fair, we present some unforgettable vocal performances plus guitar instrumentals that showcase his unique way of playing the blues. And there are some unreleased live performances from a radio show broadcast in 1995. Bobby Parker originals are hard to come by – apart from the hit Watch your Step, everything else is a valuable collector’s item. But this compilation brings them all together in one set and we can promise a treat in store for you.

All in all the 52 tracks here are a veritable treasure trove of wonderful music. And the presentation of the CD set is superb with a sumptuous booklet…I can’t recommend (it) strongly enough…The definitive Bobby Parker is a dream come true for fans like me – this is the best reissue CD of 2020 for sure. Don’t you dare miss it! John Ridley

Blues Get Off My Shoulder 1957

'All in all the 52 tracks here are a veritable treasure trove of wonderful music. And the presentation of the CD set is superb with a sumptuous booklet…I can’t recommend (it) strongly enough…The definitive Bobby Parker is a dream come true for fans like me – this is the best reissue CD of 2020 for sure. Don’t you dare miss it! ' John Ridley

I Won’t Believe It Till I See It

Don’t Drive Me Away

Blues Get Off My Shoulder

Keep Away From My Heart

Steal Your Heart Away

I Couldn’t Quit My Baby

Once Upon A Time, Long Ago, Last Night

You Got What It Takes