This release features tracks put down at the Muscle Shoal area Fame and Quinvy Studios between 1968 and 1969.

Both the tracks on the first side are newly mixed to stereo from the original multi-track tapes, and both are longer than the previously issued versions.

While the other side has two tracks that are now out for the first time ever on 7 inch vinyl.

As this release has been limited to 1000 copies and also bearing in mind the time of year and the fact that this ep has already been out for a couple of weeks...

Then this news item could be said to be one of those if "you're not fast your last" type of affairs.

1. That's The Way Love Turned Out For Me (Unedited Stereo Mix)

4. Love Is A Beautiful Thing

A clip of this releases website notes written by Tony Rouce

Lots of you in Right Track Land seem to like the Kent EPs that we've been putting out in the last couple of years, and we can promise you that there'll be several more in the coming months. Many will be comprised of music recorded in the American South, a part of the world close to the Kent A&R staff's hearts for any number of reasons beyond the obvious quality of the music that sprung from there. Lovers of southern soul will be well pleased with these, particularly as a number of them will contain music that they have never heard before...

In the wake of 'The Stars Of Goldwax' and 'The Stars Of Fame' it's great to be able to end the year with an EP containing four songs by a man who recorded for one of those labels and, on occasion, at the studios of the other. 'James Carr In Muscle Shoals' brings together the three tracks from James' 1968 session at the Shoals area's Quinvy Studios, and complements it with one from an early 1969 session at FAME. While all of the tracks have been released before, two are hitherto unreleased on vinyl and the other two have been mixed into first-time stereo, from the original 4 track multis, expressly for this project.

The contents of the EP offer a well rounded demonstration of James Augustus Carr's abundant vocal capabilities. Deep soul, country soul, funky soul - James could do the lot and do it all well, even if it's the deeper side of his catalogue that has predominantly earned him his enduring reputation with collectors and fans the world over.

All four selections included here offer five star performances, but Southern Soul seldom gets better than it does on our lead track, 'That's The Way Life Turned Out For Me', a truly intense performance that sets the tone for what follows in its wake (and the version of 'Life Turned Her That Way' that does follow it, is different to the one that previously graced 50% of a Goldwax 45)

the full info can be read here

available at the usual suspects now 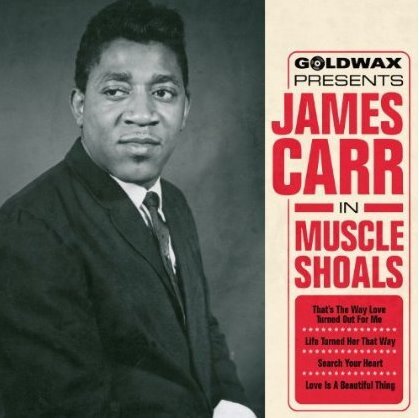 which will be a section where you can read all the latest albums, dvds, book and such release news

either via the article/news submission (members only)

above link can be found at the bottom of every page