out now read and listen

Joe Stevenson was born in 1930 in North Philly, and from a young age was passionate about music, graduating from playing & writing to producing, whilst holding down two jobs in the post office and as a school teacher. By the end of 1960, Joe had built a studio – Imperial Sound Studios at 447 N. 60th St, Philadelphia and was putting out 45’s on his own “Pentagon” label, and from 1965, in association with partners, Bill Lucas and Ed Kelley, was producing and putting out releases on the “Del Val” label.

MD records, in association with Joe Stevenson bring you two tracks, recorded at Imperial Sound Studios that sadly did not make it to vinyl at the time. Vince Apollo (Marvin Brown) had recorded, and released “I Bear Witness” on Joe’s “Pentagon” label in 1967, but had also cut a duet version with his sister Connie, as the “Dynamic Siblings”, which never made it past the acetate stage until now!!! 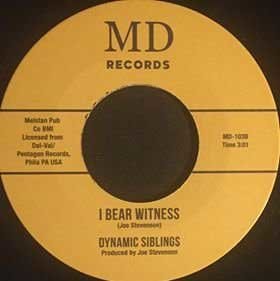 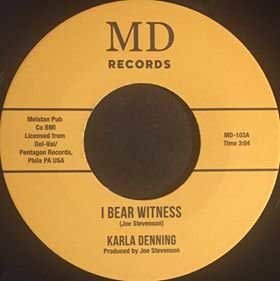 Coupled with this, we have Karla Denning’s “Funky” take on the “Vince Apollo” tune, recorded in 1971 and again, not getting past the acetate stage until now!!

Just a heads up, first class postage costs have been increased by Royal Mail, prices below now reflect this.

As usual the singles are £10 each and postage first class recorded in the UK is £2.70 for 1 to 3 singles. Europe and RoW on request.