One of show businesses most versatile and enduring characters.

Ron Ellington Shy is one of show businesses most versatile and enduring characters. His career has seen him star and perform alongside some of Hollywood’s top names.

Ron the nephew of celebrated jazz band leader “Duke” (Edward Kennedy) Ellington was born during 1941 in Cleveland Ohio, with his family later relocating to the West Coast. A talented teenage musical scholar, the first group he joined was Rudy Hunter & The Fabulous Tones, their minimum requirement for prospective group members was to have the ability to play 5 separate instruments as well as being able to sing. Ron an accomplished saxophonist, trombonist, bass guitarist, drum, keyboard and harmonica player, got the Job. Later Ron joined Don & Dewey of “leavin’ It All Up To You” fame. He briefly left them before returning once again to Partner Dewey Terry following Don “Sugarcane” Harris’s imprisonment for narcotic offences. 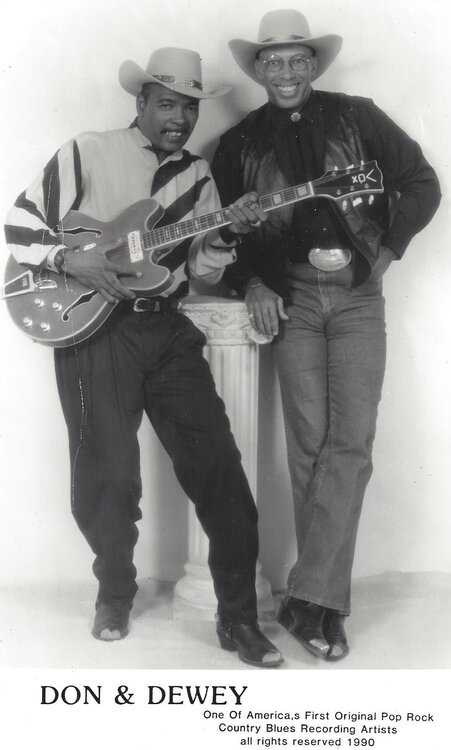 At different times during the late 60’s and 70’s, Ron presented his own cable TV musical and talk shows, ‘The Ron Ellington Show’ followed by the ‘Las Vegas Legends’ show which he co-hosted with several of the town’s most notable ‘Elvis’ impersonators.

During the 1970’s Ron was to further his acting career by landing parts in small screen blockbusters, Dallas, Knots Landing, Falcon Crest and Jake & The Fatman. His big screen credits include Hammerlock (with Pat Morita), Hell To Pay (with former Bionic Man actor Lee Majors) and Gang Warz (Robert Vaughn). 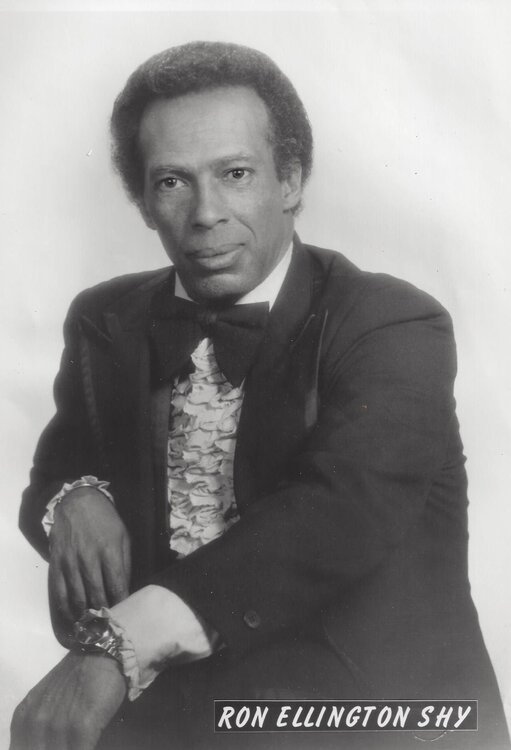 Ron has continued to be a popular and respected performer throughout the clubs of Las Vegas, The Tropicana, Sahara, Frontier and Mint Hotels etc, etc. later returning to his native Cleveland taking up the position of Musical Director at WKTC Channel 3. 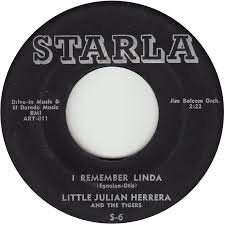 Ron Shy’s recording career stretches as far back as the Doo-Wop era of the 1950’s.  Ron’s vocals can be found on the local East L.A hit by Little Julian Herrera & The Tigers “I Remember Linda/True Fine Mama” which gained a release on Art Laboe’s, Starla label. Ron was one of Little Julian’s backing group, the Tigers alongside Ernie Prentice, Ray Collins and James Thompson. Ron claims that it was James Thompson and he that actually wrote the song although the label credits the song to Egnoian (Art Laboe) and Otis (Johnny Otis). The flipside “True Fine Mama is a cover version of the Little Richard song.

In 1963 Ron recorded the Ed cob penned “The Ballad Of Billy Strong/You Can Take Your Saturday Nights” for Herb Newman’s Era  (3110) label, under the artist name of just Ron Ellington. 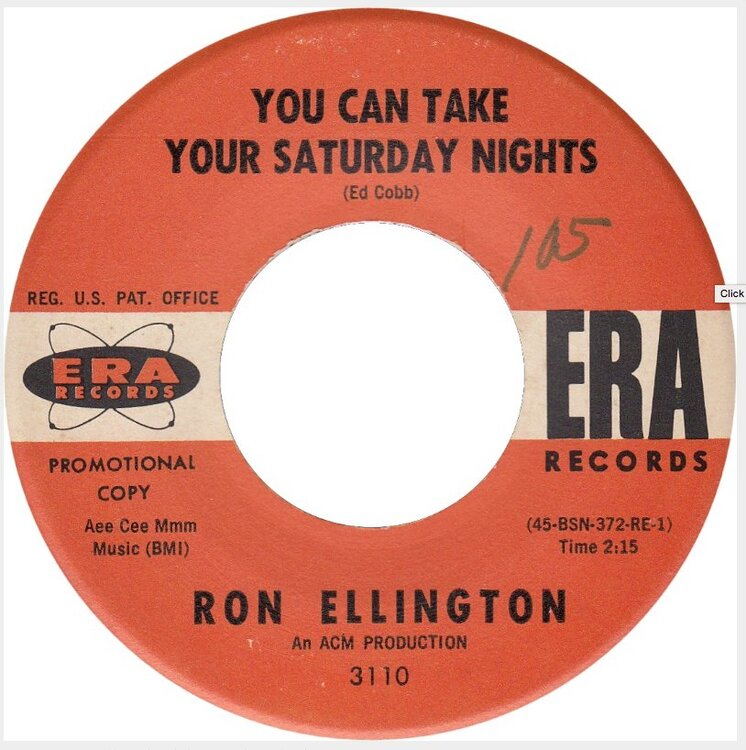 At the beginning of the 1970’s Ron was living in Dallas, Texas with his brother Leslie (a football player with the Dallas Cowboys). Ron had several business interests in Dallas including restaurants and a night club which he co-owned with a partner Tony Barber. The name of the night club was ‘The Twelve Signs’ (a reference to the twelve signs of the Zodiac). During one of Ron’s evening performances he was approached by recorded producer Hadley Murrell (the man behind The Servicemen on Windhit and Pathway). Hadley persuaded Ron to record a song he had written entitled “Everybody Wants, Nobody Cares” which Ron eventually recorded on Hadley’s own Sevens International label.  Although “Everybody Wants, Nobody Cares” did receive extensive airplay it was to be the songs flipside the Doc Pomus, Mort Shuman penned “I Count The Tears” originally recorded by The Drifters that really took off. It was Ron’s choice to cover The Drifters song a personal favourite of his from his time working alongside them. Although recorded in 1971, Ron version of “I Count The Tears” still had the required 60’s feel to it that would eventually lead the fanatical East Midland Northern Soul DJ Rob Marriot to spin it under the cover up name of Roy Hamilton. 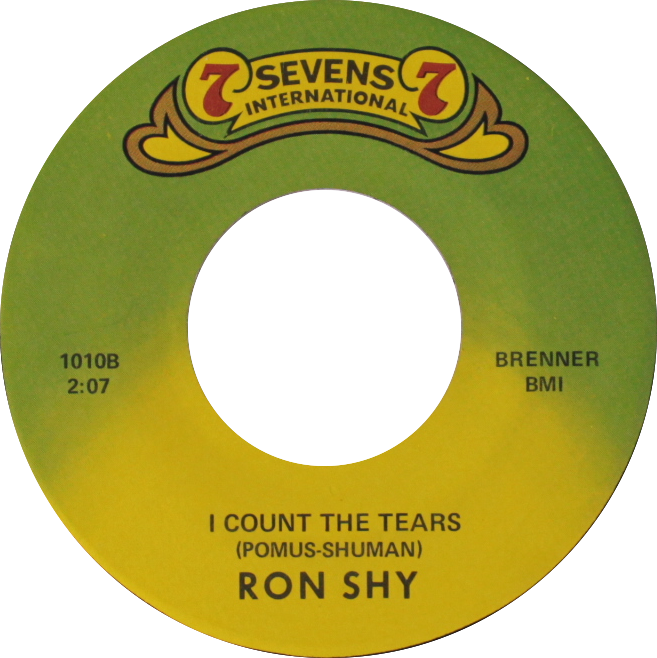 During the 70’s and into the 80’s Ron was to perform alongside Marvin “Rip” Spencer in a latter-day version of the popular 1950’s doo-wop duo Marvin & Johnny. Marvin Spencer was the nephew of the 1950’s original duo’s founding member Marvin Phillips. This later re-incarnation continued to perform all of their predecessor’s popular hits, “Cherry Pie”, “Tick Tock” and “Daddy Loves Baby” amongst others.

Although Ron had made several solo recordings, the majority of his recording output had been made while performing as a member of several different ensembles. So during 1976 Ron was to be advised by his friend veteran L.A. record producer H.B. Barnum to concentrate more on becoming a solo performer, with H.B offering to produce him. Ron signed to H.B’s ‘Little Star’ Label, where H.B produced several tracks on him, although only two tracks were to gain a 45 release, the H.B. Barnum, Walter Johnson penned “Don’t You Know” backed with the Don Grady penned “Didn’t Mean To Break Your Heart”. This release has since proved to be the Little Star labels most sought after 45 single. Ironically at circa the same time another  H.B. Barnum artist blue-eyed singer Judy Street had found a huge following on the UK Northern Soul Scene with her 60’s pop/soul recording “What” (Strider 0004). A licensing deal with the UK based Grapevine label followed for the release of “What” to satisfy the records UK demand. Upon the arrival of Judy’s tapes in England, it was found that H.B had also included a tape of the unissued Ron Shy tracks. While Judy Street’s “What” went on to achieve cult status, Ron’s tape remained gathering dust in Grapevine owner, John Anderson’s garage. Ron’s little Star 45 did eventually later become a secret sound on the modern/crossover scene. While Ron was to release some of his unissued Little Star tracks on a later cd project of his own entitled “Flirtations”. 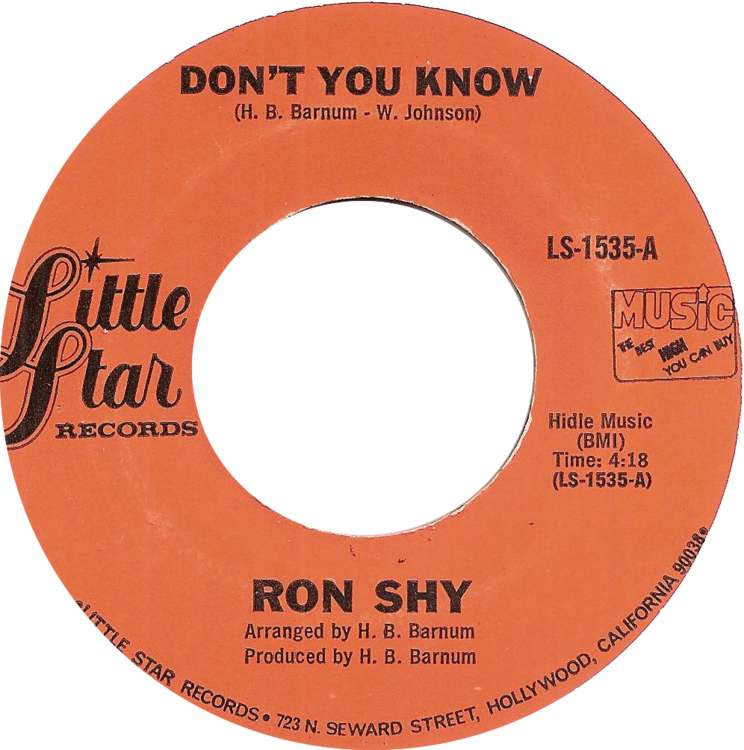 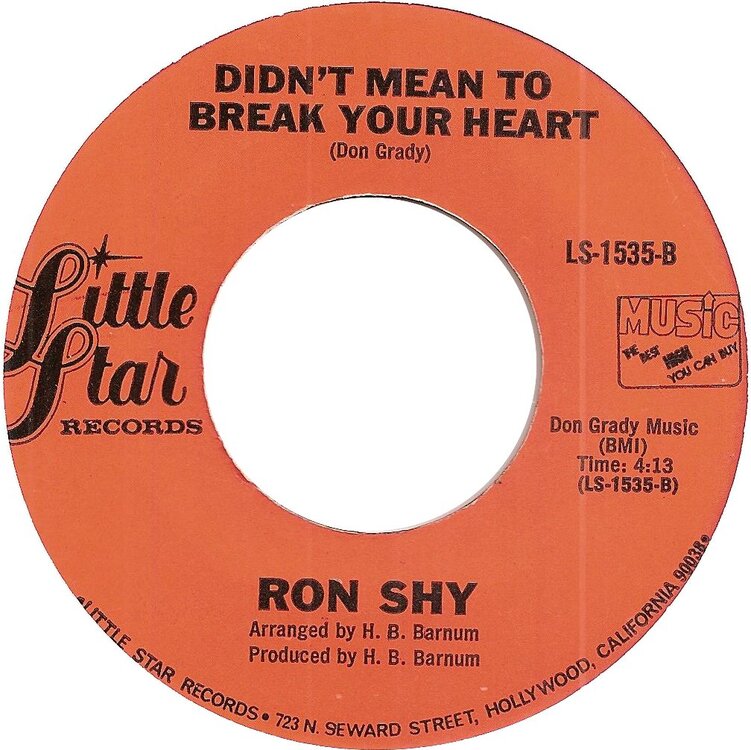 Having beaten cancer on two separate occasions, and at the age of 74 Ron is currently still working the clubs, with his shows repertoire including the songs “ Don’t They Know”, Cherry Pie” Didn’t Mean To Break Your Heart” etc,  as well as appearing on the same bill as the current line up of the  ‘The Vibrations’ (Okeh, Neptune, Mandela, etc). He is also due to star in a tribute film to the late Sam Cook. If you care to take a look, some of Ron’s recent performances can be found on You Tube accompanying his son, Taber Ellington Shy.

Following the discovery of the unissued J.B. Bingham tracks in 2012, which H.B. Barnum also produced a licensing deal was struck to release Ron’s unissued material as well. Upon playing the tapes once more we realised that a second and superior version of “Don’t You Know” existed which included female backing vocals and added instrumentation and was also longer than issued 45 single. Recently with a few more 45 copies of the Lou Rawlsesque “Don’t You Know” (briefly being covered up as ‘The Flowers’) being unearthed, the record has grown in popularity throughout the European Northern and Modern soul fraternity. 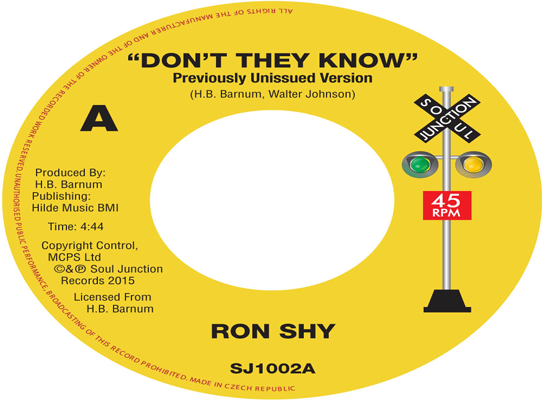 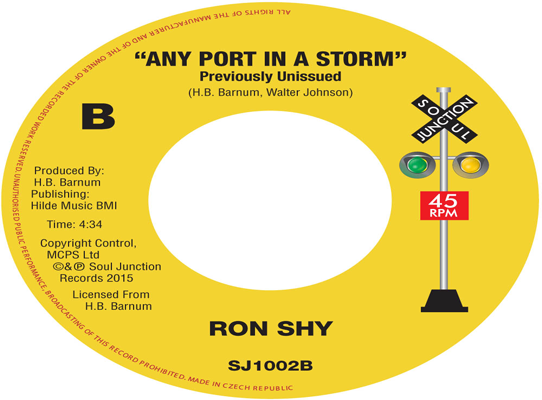 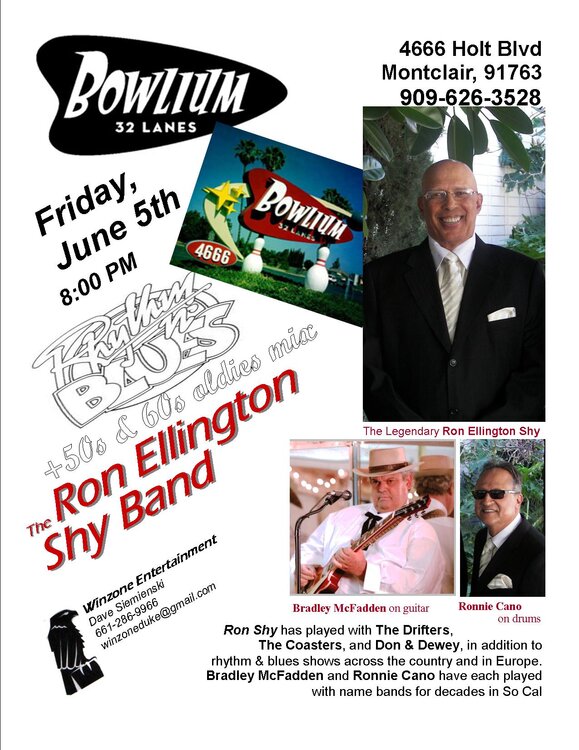 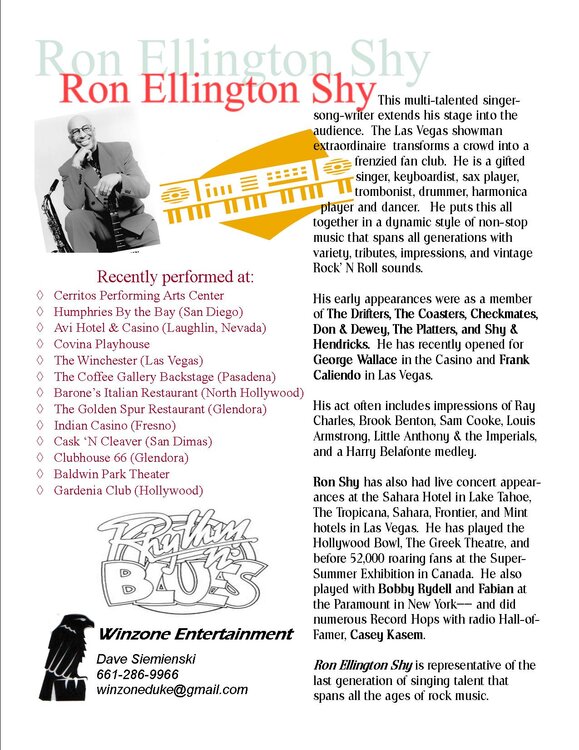 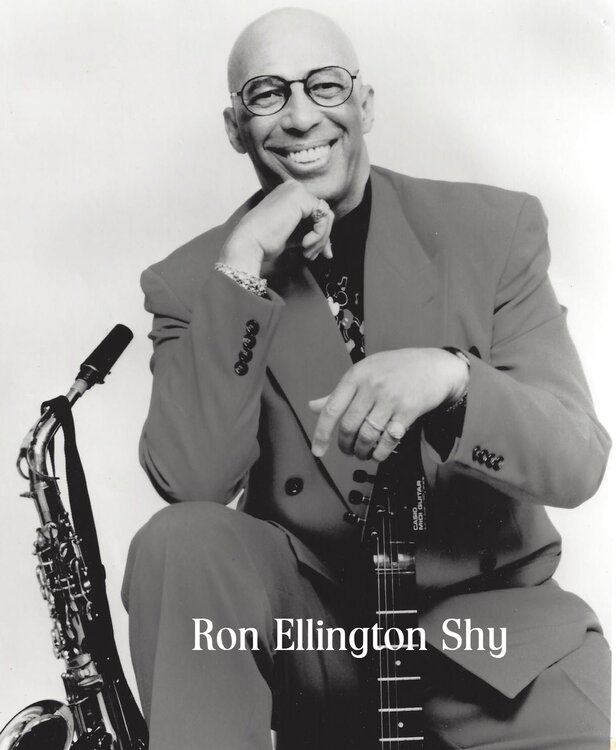