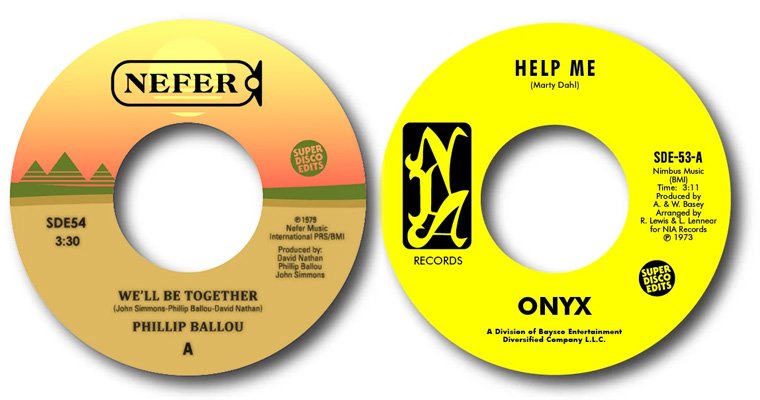 News about two notable 45s releases to pass on, two tip top 45s that may be of interest!

Both are from Super Disco Edits , one available right now, the other next month/year, can listen and read below...

'At first glance you may think Super Disco Edits is just another cut and paste record label, churning out disco fodder. But let me stop you there.
We morphed oursleves into our first true love. Sourcing long and forgetten Soul & Jazz artist so we could document their hopes and dreams once again on glorious vinyl.
From established artist like Leroy Hutson and Mike and Dennis Coffey to newly disovered acts like Between the two.  Our aim is to dig deep into old studio archives and dusty lofts and basements of past record label owners to see if we can revive the magic that may lie in old studio reels they may have.'

Out now and on the shop floors

Previously unreleased this up-tempo 70s track recorded in 1973 certainly is in contention for the most feel good 45 release of the year, both smile and feett moving inducing.

The group "Onyx" was formed in 1972 the members, were Aaron and Wendell Basey, Malvin Scott, and Ronald Busby. Ronald left the group to pursue other interests and was replaced by Cornelius Weekly.
We were reared in the San Francisco Bay Area, specifically Oakland and Alameda, California. We grew up singing in our School and Church Choirs. We all began singing in quartets while we were teenagers in Junior High School. Malvin sang in the group Morry Williams and the Kids. They had a national hit titled "Are You, My GirlFriend." The Basey brothers sang with several groups in California, none with any recording history. The Basey's were the founding members of the soul group Natural Four. After that, along with Malvin, they started the singing group "Onyx."

Another previously unreleased side making its vinyl debut. Listen below and you may hear just why there is a fuss about this one.

PHILLIP BALLOU Pittsburgh-born Phillip Ballou’s earliest years were spent in the gospel field; after he moved to New York City in the ‘70s, he teamed up with Bennie Diggs and Arthur Freeman, founding members of The New York Community Choir and singer Arnold McCuller to form the group Revelation. The quartet recorded for RSO Records, scoring some R&B success in the US with tracks like “Get Ready For This” and “You To Me Are Everything,” touring the Bee Gees among others. Phillip also sang on albums by NYCC recorded for RCA Records and continued with Revelation until 1982. Frequently hired for sessions in and around New York, Phillip teamed up with UK soul music journalist David Nathan (who he’d met in 1974 during Nathan’s first US visit) and John Simmons, formerly a member of The Reflections, another New York vocal group to write a series of songs for his own proposed solo record deal. Although a contract did not materialize, one of the songs – “Ain’t Nothing Like The Love” – got some interest from famed Philadelphia producer Thom Bell who presented it to The O’Jays. Ultimately, the tune was turned down by Kenny Gamble and John Simmons, by then musical director for Stephanie Mills, recorded his own version for a small independent label in 1981.

More info, background, purchase options and such can be had via Super Disco Edits page on the Big Cartel site