The key word here is rare...

Sent in by Dave Cassidy, thanks for the contribution mate, appreciated.

Every month we navigate the high-water marks, rapids and stagnant ponds of the CD racks, so you don't have to. We continue with...

It was the venerable Blues And Soul pundit, Dave Godin, who coined the term 'Northern Soul' to describe the rare soul sounds that were attracting fanatical crowds to the massive dance clubs in the North of England in the late '60s and early '70s. The key word here is "rare". In those days, DJs and collectors would think nothing of popping over to the US on the off-chance of finding that arcane "read about but never seen gem, or wading through the second-hand racks and parting with chunky bankrolls for a holy grail 7-inch. Thankfully, if you want to get into Northern Soul these days, all it takes is a stroll to your local record shop. The only problem is where to begin when faced with track lists of obscure artists whose songs are duplicated time and time again on a number of discs.

Your best bet for a comprehensive introduction and overview is Soul Survivors (Telstar, £18.49), which has become the biggest-selling album to document the scene.

Compiled by Wigan Casino DJ Russ Winstanley, it includes Tobi Legend's Time Will Pass You By, Jimmy Radcliffe's Long After Tonight Is All Over and Dean Parrish's I'm On My Way, collectively known as the "three before eight" - the last three songs to be played before the 8am wind-down at the Casino each week. It also features Do I Love You (Indeed I Do) by Frank Wilson, one of the rarest and most-prized Northern Soul singles (fetching around £5,000 for an original promo copy), and, for me, the genre's definitive classic, R. Dean Taylor's There's A Ghost In My House. Other, more famous luminaries, like Jackie Wilson, Barbara Acklin, Dobie Gray and Little Anthony And The Imperials, are also on board.

Soul Survivors Volume 2 (Telstar, £18.49) has a more mainstream selection that includes Booker T. And The MG's Green Onions and La belle's Lady Marmalade but also the must-have original of Tainted Love by Gloria Jones, Mary Love's You Turned My Bitter Into Sweet and Beverly Ann's insightful You Got Your Mind On Other Things. You'll also find here The Just Brothers' Sliced Tomatoes, which formed the basis for Fatboy Slim's Rockafeller Skank.

Dancing 'Til Dawn (Kent £14.99), compiled by Ady Croasdell (Harboro Horace), would cause mayhem on the dancefloor with its 25 non-stop frenetic dancers, including The Shirelles' Last Minute Miracle, Sandy Waddy's Everything Is Everything and Judy Clay's You Busted My Mind. Another essential CD, also compiled by Ady, is For Dancers Forever (Kent. £14.99). which combines the cream from the first two LPs released on reissue label Kent plus new findings and overlooked gems, among them Lowell Fulson's humorous R&B groover My Aching Back and Yvonne Baker's sugar coated My Baby Needs Me. Floorfillers! (Global, £16.99), is a fine compilation containing 45 classic tracks that span the scene from its early Motown obsession through to its later crossover leanings

If you're on a tight budget but still want more of that four-to-the-floor, check out Cooler Shakers! (Music Club, £6.99). Get past the dreadful pun and there are timeless classics, like The Wrong Girl by The Showmen featuring Norman Johnson before he, became a General and Chairman Of The Board), I'm A Fool I Must Love You by The Falcons (featuring a young Wilson Pickett) and the riotous high- pitched frenzy of Breakaway by The Valentines. Also mid-priced, Talcum, Soul (Stateside, £10.49), compiled by Dean Rudland, concentrates on the Um, Stateside label and collects the main movers in the Mod branch, such as Chuck Wood's frantic Seven Days Too Long, Garnet Mimms' achingly soulful Looking For You, The Poets' mammoth She Blew A Good Thing and Bobby Sheen's boastful Dr. Love.

From the Motown stable try This ls Northern Soul Volume 1 and 2 (Debutante, both £9.99). Volume 2 is best with choice cuts such as Lonely, Lonely Girl Am I by The Velvelettes and Spinners' I'll Always Love You.

The Golden Torch Story (Goldmine, £14.99) gathers together the floorshakers that packed out the Torch club every week, including N. F. Porter's catch-phrase coining Keep On Keeping On. Also worth investigating are The Wigan Casino Story, The Wigan Casino Story Continues and The Wigan Casino Volume 3: The Final Chapter (Goldmine, all £14.99), which spotlight the Casino's evolving taste in soul. For a variation on and Yvonne Baker's sugar-coated My Baby the theme check out Mo' Mod Jazz (Kent, Needs Me. Floorfillers! (Global, £16.99) is a fine £14.99) to discover Smokey Joe's La La by the compilation containing 45 classic tracks that curiously named Googie Rene Combo, which was reworked by David Holmes on My Mate Paul.

No self-respecting NS fan would be without some thing from the OKeh label, so check out OKeh - A Northern Soul Obsession Volume 1 and 2 (Kent £14.99) and hear Little Richard on top form with the stomping I Don't Want To Discuss It. OKeh was also home to one of Chicago's greatest vocalists, Major Lance, and it's worth tracking dawn his Best Of (BGO £11.99). It includes the fabulously titled Um, Um, Um, Um, Um, Ain't No Soul Left In These Old Shoes and The Monkey Time, written by Curtis Mayfield. Mayfield's own sublime voice can be heard on Definitive Impressions (Kent £14.99), which features the storming I Can't Satisfy and You've Been Cheatin'. Oh No Not My Baby: The Best Of Maxine Brown (Kent £14.99) shows the '60s soulstress at her most dynamic with the beat ballad that lends its name to the title of the CD, alongside the emotive intensity of All ln My Mind, the up beat lt's Torture and the classic One In A Million.

Other important releases: A Cellar Full Of Soul (Jan fm, £15.99), compiled by Richard Searling from tracks played on his radio show; Blackpool Mecca Story (Goldmine, £14.99) for that '70s crossover sound; Ain't Nothing But A House Party (Sequel, £10.49), which documents the Philly end of things; and Essential Northern Soul '60s Dancefloor Classics Volume 2 (Deep Beats, £10.49), a fine mix of classics and obscurities. Finally, check out Kev Robert's compilation The Roots Of Northern Soul (Goldmine, £1 4.99), which traces the early years, concentrating on the R&B tracks that kept dancefloors shaking throughout the '60s.

Connoisseurs A Soul Celebration Of The World's Most Famous Club (Joe Boy, £16.99) Packaged with a free 7-inch single, contains prime tracks from the Wigan Casino playlist.

Avoid: The Northern Soul Scene (Deram, £12.99) An interesting CD but one that addresses the more bizarre side of the scene where anything with the right number of beats per minute was sanctioned, hence David Essex and The Brotherhood Of Man. 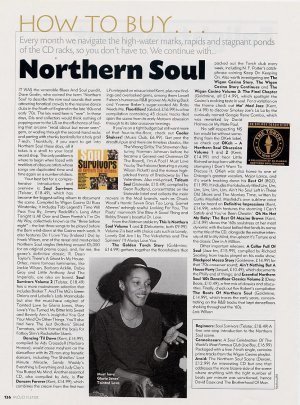