one of Muscle Shoals’ most admired singer/songwriter/musicians

Ace records have just pushed out the latest addition to their highly regarded Songwriter series. This release concerns itself with the Eddie Hinton songbook and features 24 of his works, with many making their first appearance on UK CD release. Details follow below

Versions of two dozen of the finest compositions from one of Muscle Shoals’ most admired singer/songwriter/musicians of the 60s and 70s.

Atlantic Records’ Jerry Wexler said he was going to be “the next big thing” more than 40 years ago. Sadly, life dealt Eddie Hinton several poor hands in his 51 years on Earth, from a minor early 70s drugs bust that led to a premature departure from his home in Muscle Shoals to the release of a fantastic debut album in 1977 that got buried when his record label went bankrupt weeks afterwards, to a fatal heart attack in the 90s, just when he was finally beginning to achieve a long-deserved level of international recognition. No wonder he once wrote and recorded a song called ‘Hard Luck Guy’. If anyone ever earned such a soubriquet, it was Eddie Hinton.... 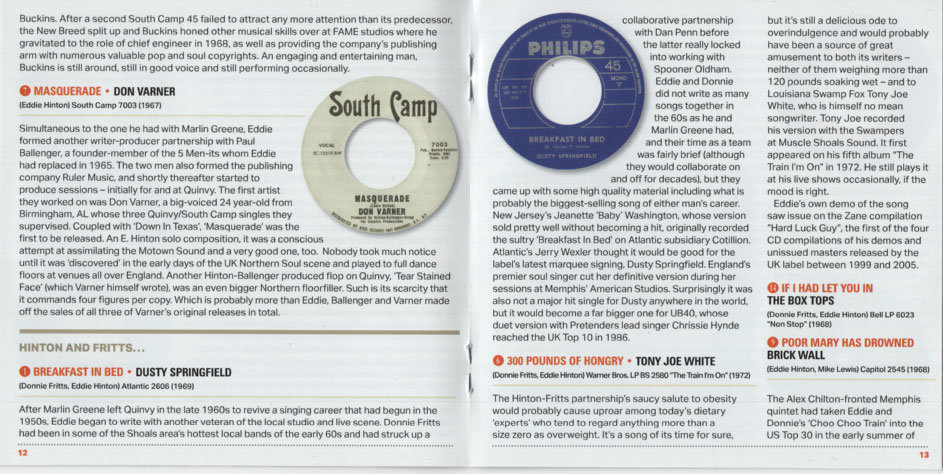 Down In Texas - Oscar Toney Jr.

Sure As Sin - Candi Staton

It's All Wrong But It's Alright - Eddie Hinton

Help Me Make It (Power Of A Woman's Love) - Mink Deville

Save The Children - Cher

If I Had Let You In - The Box Tops

Standing On The Mountain - Percy Sledge

I Got The Feeling - The Amazing Rhythm Aces

Lay It On Me - Gwen McCrae

Where You Come From - Bonnie Bramlett