The all time Northern/Detroit classic double-header "If It's All The Same To You Babe"/"Exus Trek" by Luther Ingram/Luther Ingram Orchestra has been re-issued in the UK by arrangement with legendary producer Robert Bateman.

The release, via Inferno, is on a lookalike of Robert's H.I.B label and is available now.

A regular black vinyl issue with no centre is joined by a limited edition multi-coloured vinyl Audition Copy solid centre release with just 150 pressed, all individually numbered from 1 to 150.

"I met Robert in the USA and was really pleased to be able to release the single as it's such a masterpiece. It's one those records you would play to aliens if you had to explain

what Northern Soul sounds like.. I cannot think of many records where the A side vocal and the B side instrumental both stand up in their own righs as classics. It's perfect Northern Soul but when I asked Robert who on earth in the 60's he was aiming such an uptempo record at he just said he wanted to out out something that sounded like The Four Tops!", said Inferno's Neil Rushton.

Robert remembers the making and selling of the record very well.

"We recorded it at Golden World. The musicans were the Funk Brothers moonlighting from Motown. My friend Popcorn Wylie worked on that session with me, and we cut the vocals and the backing tracks there, I then took the tapes by myself to New York and pulled a favour to get use of the Mercury Studio in New York. That is where I added the so called Orchestra. Actually it was just two violinists who I overdubbed until I got the sound I wanted. I had learnt how to overdub from my time at Motown.

I then pressed the records up on H.I.B which is my label. I stands for Ingram, B for Bateman and H for my girlfiend at the time. Luther was very popular in St. Louis and we got radio plays there right away.I sold maybe 5,000 copies and the distributor in St. Louis wanted more and I gor wary about the cost. He said don't worry, I will get someone to help. A few days later I picked up the phone and it was Jerry Wexler from Atlantic and he said the distributor had told him all about the record and could we cut a deal so Atlantic could distribute it? I was real happy as I had made money from selling my copies, and Atlantic gave me a nice advance which by itself more than paid for the recording costs".

For info on how to order e-mail - neilrushton2@btinterner.com 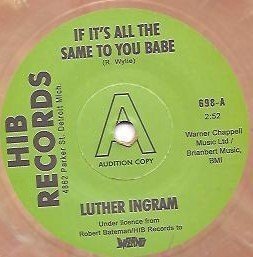