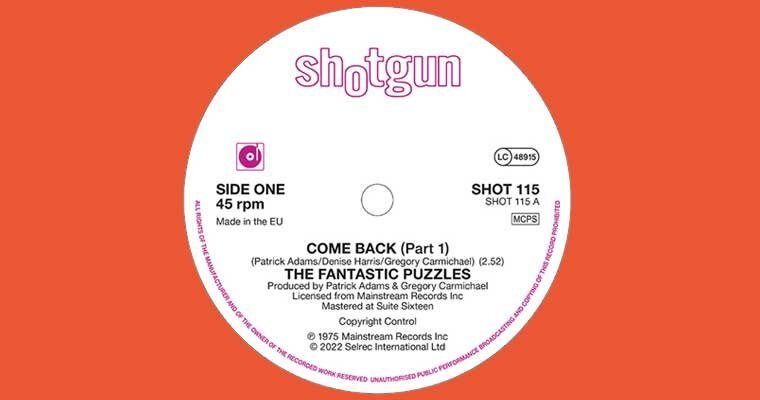 Latest news on the next upcoming release from Shotgun Records

The instantly catchy and uplifting club soul favourite 'Come Back' by The Fantastic Puzzles is scheduled for release on Shotgun Records. The 7" single will be available from 14 January.

The Fantastic Puzzles were from Brooklyn, New York, and had recorded as 'The Puzzles' and as 'The Four Puzzles' with veteran Sam Culley but it isn't known who sang lead on 'Come Back'. A raw demo of the track had featured vocals by Sheldon Turner.

The infectious retro-flavoured song was produced by hitmaker Patrick Adams and the up-and-coming Greg Carmichael. They were prolific and successful at that time but, sadly, not with this particular record.

'Come Back' was issued in 1975 on the promising but short-lived New Moon label which was distributed by Mainstream Records. It was popular enough with UK soul fans to warrant a release on Pye's Right On! label the following year and its revival is long overdue.

Also scheduled and in production: