Soul Junction again team up with the Poindexter Brothers for their latest release featuring two very rare and collectable sides.

Vivian Copeland was a budding young singer who was brought to the Poindexter Brothers attention by her husband. Vivian was to record several Poindexter compositions beginning with “I Don’t Care What He’s Done “ and “So Nice I Had To Kiss You Twice” which paired together gained a 45 release on the Bell distributed Amy (577) label in 1967. A further three 45 releases by Vivian would appear on Jeff Moore’s D’oro label. Firstly the now highly sought after “Chaos (In my Heart) b/w “Cushion The Blow (D’oro 1002) in 1968. Secondly A cover version of Maxine Brown’s “Oh, No Not My Baby b/w I Don’t Care” (D’oro 1006) another Poindexter song, and finally a version of the Billy Terrell and Ray Dahrouge penned song “He Knows My Key (Is Always In The Mailbox) b/w So Nice I Had To Kiss You Twice” there are two releases of this 45, the local D’oro release on a gold label and a subsequent blue label release which was distributed by Atlantic Records. 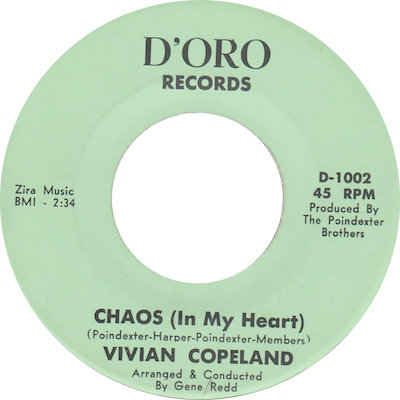 The Poindexter Brothers, Richard and Robert where raised in the city of Newport News, Virginia. Both brothers had been members of different high school groups, Robert the eldest, sang with The Swans and then ‘The Silvermoon quintet’ before joining the U.S Navy. While Richard performed as a member of ‘ The Rocketters’ and then later ‘The Gems’. Richard did travel to New York during 1963 with The Gem’s to appear at the renowned Apollo Theatre, where upon he was reunited with his brother. Robert, who following his discharge from the service had made the Big Apple his home.

Following the Apollo gig Richard returned home to Virginia before permanently joining his brother in New York during 1964. Richard leaving his wife and children behind vowing to send for then as soon as he scored a hit record, something he felt would happen in a matter of a few months. Following a three wait Richard was finally reunited with his family due to the success of Linda Jones’s 1967 hit “Hypnotized” which the Poindexter’s co-wrote. 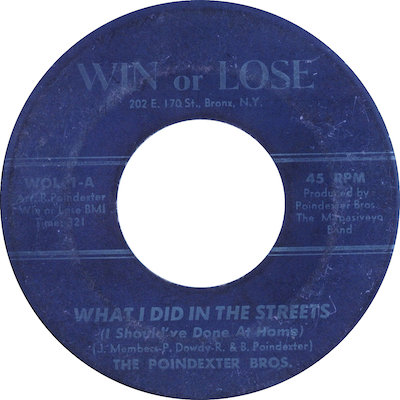 Following every high there usually comes a low (or two) so during 1969 and again being short of money the brothers decided to start their own production company choosing the very apt label name “Win Or Lose” the label’s first release was the brothers self produced, performed and co-written song with Jackie Members (Robert’s wife) “What I Did In The Street (I Should’ve Done At Home)”a very clever and intricate duet by the brothers with musical accompaniment provided by a group of local Bronx musicians, The Mapasiveyo Band. The b-side of the 45 is a cover version of the Johnny Ace Duke label standard “Never Let Me Go”. sadly this 45 fell by the wayside (although the song was latter covered by Florida artist Barbara King). 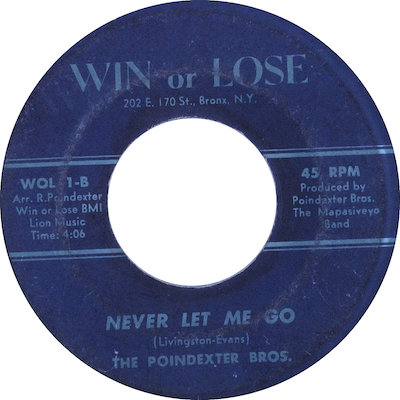 ‘Win Or Lose’ Productions did later hit pay dirt through a plethora of Poindexter songs recorded on The Persuaders including the hit record “Thin Line Between Love And Hate” for Atco Records. 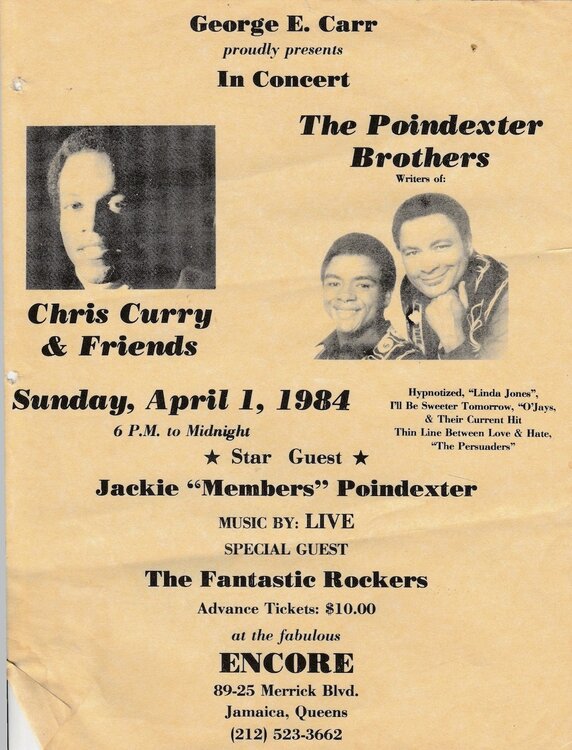 To buy directly from Soul Junction Records click HERE or check out you usual stockists.