the musical association of those times

When Bottom & Company and Redbone had finished as ‘openers’ at The Forum, Los Angeles in May 1974, Marvin Gaye came on stage to a 32-piece orchestra conducted by Gene Page together with the back-up quartet Ladies Choice(ii). Marvin started with ‘Trouble Man’ and finished with ‘What’s Going On’.

Michael Torrance was one of those back-up singers in Ladies Choice, and also on the “Marvin Gaye Live LP” that was recorded live at Oakland-Alameda County Coliseum, California. He also became a writer at Motown during the late 70’s (ii). https://www.discogs.com/High-Inergy-Skate-To-The-Rhythm/master/559162

What follows is not a scholarly review of the political struggle facing the Black Panther Party. It is merely to highlight some of the musical association of those times with that Party. If not all, then some people who search out the history of Soul/Funk will already know much of this. However, perhaps those that follow R&B, Soul and Northern Soul, and other soul genres might be unaware and even surprised by it.

Michael Torrance was also first and foremost a representative of the Black Panther Party, and in the quartet that was The Lumpen. The original members were Michael Torrance, Bill Calhoun, Clark (Santa Rita) Bailey-Santa Rita Jail is in Alameda County, and I assume Clark had spent some time there. The other group member was James Mott. The Lumpen was essentially the Black Panther Party Revolutionary Singing Group. The existence of which only really surfaced when Rickey Vincent(iii) learned from Walter Turner (a journalist at KPFA) that the Panthers had a band called The Lumpen.(iv) 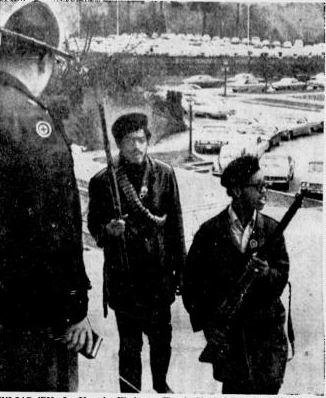 A year before The Lumpen’s arrival – 50 years ago in 1969, the Panthers' protest at Olympia mirrored one that had occurred in California's capital Sacramento in 1967 against a similar gun law known as the Mulford Act.

Picture(v): February 28th 1969 Two Black Panthers, part of a group who marched up the steps of the State Capital building, Olympia, being confronted by Captain R.J. Ranney.

Under such circumstances, it’s hardly surprising that the movement also “used music as a means to not only document their struggle but also to educate, motivate and inspire people to resistance(vi) - Michael Torrance.
In Sept 1969 Vault Records(vii) took a project on to record Elaine Brown Deputy Minister of Information for the Black Panthers. Out of that came “Seize the Time” LP, and Jack Lewerke (Vault prexy) gave 500 copies to the Black Panther Party for promotion https://www.discogs.com/Elaine-Brown-Seize-The-Time-Black-Panther-Party/master/394499 . Proceeds from the LP went towards maintaining its program of providing free breakfasts for ghetto children. 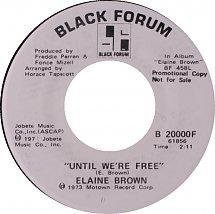 B20000F. Black Forum recordings get scarce notice in any anthology of the Motown label. The Motown imprint released eight albums between 1970 and 1973, including a Martin Luther King, Jr. speech denouncing the Vietnam War.

As for The Lumpen in terms of recording? - just one released single “Free Bobby Now” [refers to the plight of Black Panther leader Bobby Seale(viii) who was in jail] / “No More”, both on Seize The Time label ‎BPP-4501. 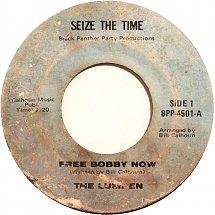 They toured, singing at community centres, clubs, and rallies. Mostly in the San Francisco area like at Merritt College, Oakland.

There are two never-released sides by The Lumpen that had been recorded at a 1970 concert at Merritt College(ix) - “Thomas Wallace and drummer Minor Williams anchored the song with a groove borrowed from (James) Brown's "There Was a Time." A version of Curtis Mayfield's 1965 freedom anthem "People Get Ready" followed, but instead of singing about not needing a ticket to board a train that's coming, as Mayfield had, The Lumpen substituted the lines revolution's come and your only ticket is a loaded gun”.

Others played their part.

As an inmate, Ike White was heading a committee which booked outside entertainment to play at San Quentin prison. In 1971 he helped organise “Soul [Consciousness] Day” (which became renamed as Malcolm X Day at San Quentin”). Curtis Mayfield, Muhammad Ali, War, Jimmy Witherspoon and Eric Burden were invited(x) (xi). It was a day-long event organised by the prisoners’ organisation, with the help of the newly formed San Quentin Prison Chapter of the Black Panther Party (BPP).

There is a further account that Curtis Mayfield was actually the headliner. What the prison authorities were unaware of was the supporting band was none other than The Lumpen and their band the Freedom Messengers(xii).

The Lumpen had lasted a year and broke soon after in 1971.

Curtis Mayfield also had sides like “Mighty Mighty (Spade and Whitey)”, The Impressions had “Choice of Colors”, The Temptations “Message from a Black Man”, and  James Brown “Say It Loud, I’m Black and I’m Proud”.


Ed Note: I’m white. From the United Kingdom. And have no direct experience of what these times were like for America and its people. As an occasional music article submitter for https://www.soul-source.co.uk/ this short piece just brings together some interesting facts about the music associated with the Black Panther Party during this historical time in the late 1960’s early 70’s.

(xi) Record World July 20th 1974 page 327 account “A guy named Ike White, who is someone who is in prison. We found him about two years ago at a soul date at San Quentin. 'Spoon asked us if we wanted to go up there for the concert, so Steve and Eric brought the recording truck up-we have our own mobile system-and recorded the show. Curtis Mayfield and a few other people were there, like Muhammed Ali.