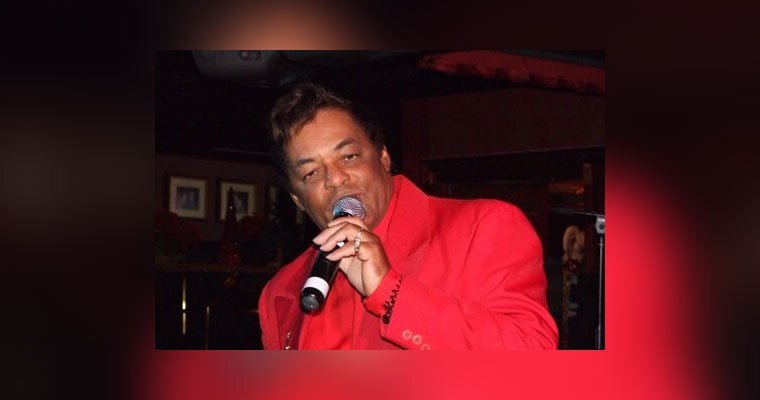 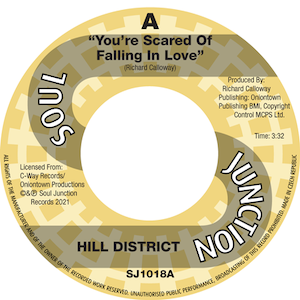 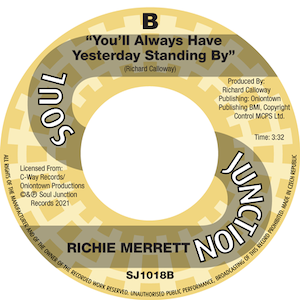 The Hill District were a group of working musicians assembled by bassist Walter “Sonny” Hughes who following one afternoon rehearsal session together in 1974 recorded their only ever 45 outing the somewhat elusive and now sort after “Your Scared Of Falling In Love”. The other group members were Sonny’s brother Richard Hughes (Lead Guitar), Anthony Law (Keyboards), William M. Standard Jr (Piano), Mark Smith (Drums) and Daniel S. Lee Jr (Lead Vocals). The groups name was taken from a grouping of African American neighbourhoods in the city of Pittsburgh P.A. locally referred to as ‘The Hill’. A onetime segregated area that had seen its population explode in the early 1900’s with the arrival of young black southern families seeking employment in the north. Local black entrepreneurs sensing the need for entertainment for this new influx of people began opening bars, gambling establishments and jazz clubs which led to the area becoming a centre of black music and culture well into the 1950’s. 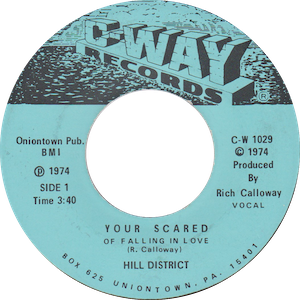 The Hill District recording session was held under the direction of record producer and song writer James Richard Calloway (A.K.A) Rich Calloway. Calloway would go on to release “Your Scared Of Falling In Love” on his own ‘C-Way Records’ label which due to lack of finance would only feature an instrumental version on the flip-side. Rich Calloway hailed from Uniontown P.A. Uniontown was known affectionately by the local black community as ‘Oniontown’ the name which Calloway adopted for his own publishing company. Unfortunately for The Hill District the final mastering of their song left something be desired (a scenario we’ve now rectified with our release) and as a result local Pittsburgh Disc jockeys refused to plug their song leaving their one and only 45 outing to fade into obscurity with the group members going their separate ways to continue their careers as session musicians with other ensembles. Keyboardist Anthony Law originally from Brownsville P.A. formed his first group under the name of ‘Micosa’ while attending Cal (California) State College.

Although his father had trained him up to join the family Funeral business, Law Funeral Home (which still operates in Pittsburgh to this day) Anthony had other ideas as to where his future lay, firstly working as a professional session musician touring with The Platters and The Drifters amongst others before becoming a music teacher (now retired). While at college he married a fellow student and moved back to her hometown of Boston Massachusetts. Anthony remembers the aforementioned Hughes brothers Sonny and Richard as being from the Charleroi district in the Mon Valley some 20 miles south of Pittsburgh, two highly proficient musicians who had worked with many notable artists of the day that came through Pittsburg.

Producer and lyricist Rich Calloway also continued with his own C-way Productions company later composing both sides of The Cleveland Ohio group ‘The Entertains’1975 outing for Steel Town records “Love Will Turn It Around/Why Couldn’t I Believe Them”. Calloway was no stranger to Cleveland having been earlier employed by Way Out Records owner Lester Johnson to compose the lyrics for Jesse Fisher’s “Your Not Loving A Beginner”. Members of the Way Out group The Soul Notes, William Bell (A.K.A Bill Spoon), John Washington and Ricki Dannison had composed a song under the working title of “I’ve Been Waiting For Your Love” which Lester Johnson didn’t like. Using the Soul Notes musical arrangements (Richard) James Calloway was employed to compose a new song, which he duly obliged in just one afternoon. With Jesse Fisher entering the studio that very same evening to record “Your Not Loving A Beginner” The Soul Notes arrangements were also used as the instrumental b-side of the 45 release credited under the title of “Waiting” (Way out -104).

*A scenario that the late Bill Spoon also mentions in this extract below. Taken from his self -penned sleeve notes from his “A Spoonful Of Soul” (Soul Junction LP 5003) album *

“In November 1965 with the help of Lou Ragland, the four of us now using the name of the “Soul Notes” signed for Lester Johnson’s Way-Out label. Although several tracks were recorded only two 45’s were released “How Long Will It Last/Don’t Make Me Beg “(Way-Out 101) and “How Long Will It Last/I Got Everything You Need” (Way-Out 106).  The intended flip to “I Got Everything you need” was a song entitled “I’ve Been Waiting For Love” which had been by written by myself, John Washington and “Riki” Dannison. We had even gone as far as recording it but for reasons which remained unknown to us the song was pulled and replaced with a re-release of “How Long Will It Last”.

“I’ve Been Waiting For Love” was later released under the different song title of “Your Not Loving A Beginner” being recorded by Richard Fishers younger brother Jesse, and with songs lyrics composed by James Richard Calloway”. 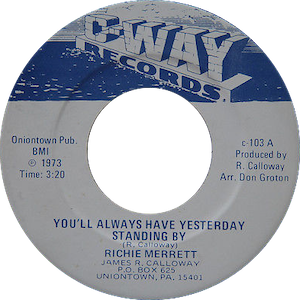 An earlier C-way 45 single release, the Richard Calloway penned and produced “You’ll Aways Have Yesterday Standing By b/w I Gave It Up” (C-Way 103) had been recorded on another local Pittsburgh artist Richie Merrett (With Merrett spelt with two E’s on this 45 release) during 1973. Richard Andrew Merritt had first come to Calloway’s attention via a live TV performance while performing with the Pittsburgh group, The Electrons. 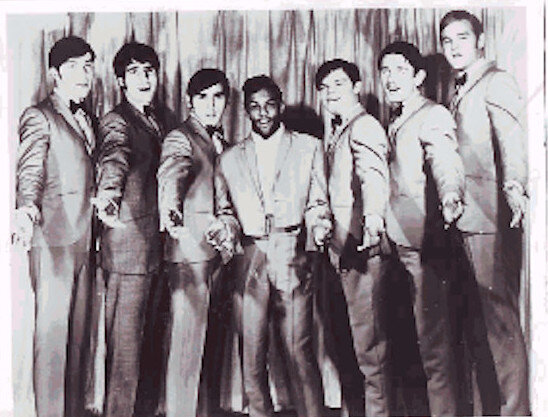 The Electrons (Richie Merrett in the middle)

The Electrons were a blue-eyed Philly soul group who recorded two excellent cover versions of “Ain’t No Big Thing” b/w “In The Midnight Hour” for the local Shock (SK-289) label in 1967 (later to be picked up by  the Date label). In the following year their lead singer Steve Sopko left the group to be replaced by the recently returned from military service Richie Merritt. Richie would feature as the lead singer on the groups 1968 release, the much covered 1961 Bobby ‘Blue’ Bland hit “Turn On Your Love light” (Shock 290), Merritt’s first recording. It was at a subsequent live performance of The Electrons in Uniontown that Richard Calloway made his initial approach to record Richie. As a professional singer Richie would perform with several groups including The Crests featuring J.T. Carter (formerly fronted by Johnny Maestro), The Drifters, The Clovers and The Marcels. Merritt had also been a onetime member of a working group known as “This Is It” which also include the aforementioned Hill District’s Sonny and Richard Hughes, and William “Billy” Standard along with a fifth member Barry Dillard. 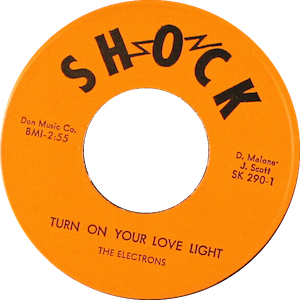 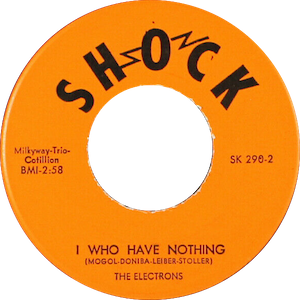 Richie’s next 45 release was the self -written and produced “Can I Get A Rebate/It’s Never Too Late” which Richie shopped around to several record companies before the Nashville based, Deltron label chose to pick it up in 1978. A little disappointed with the limited response to the Deltron release, Richie decided to release the songs again on his own R.A.M label (the label name being derived from his initials). 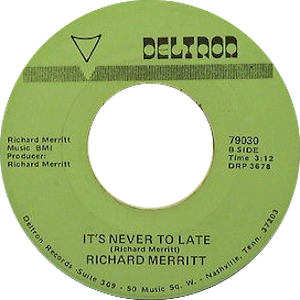 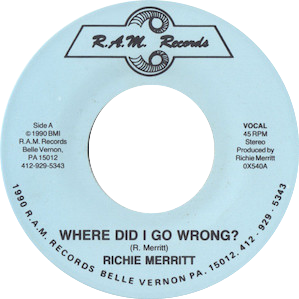 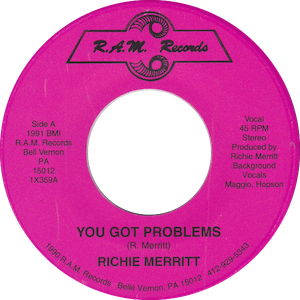 Two further solo recording would appear on vinyl some 12 years later again on his own R.A.M label. The modern soul favourites “Where Did I Go Wrong” in1990 followed by “You Got Problems” in 1991. two subsequent cd album releases followed “Richie Merritt “Then And Now” (J-Bird Records) in 1998 a collection of all his 45 releases and Richie Merritt “Now” (R.A.M) in 2005 a collection 50’s and 60’s standards. Richie also complimented his singing career working as a non-speaking extra in several Movies and Television Shows such as. “Lorenzo’s Oil” Starring Nick Nolte and Jean Claude Van Damme’s “Sudden Death” amongst other credits. Ritchie left his native Pittsburgh in 2002 following his wife’s retirement for the warmer climate of Florida and in his words better golf courses. Richie is still active today performing one off shows and appearances aboard 7day Cruise Ships travelling between Los Angeles and Sant Cabos, Mexico. 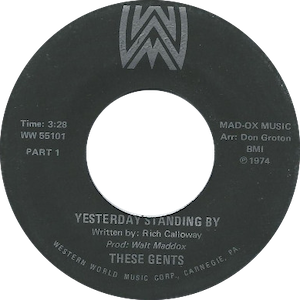 A later cover version of “You’ll Always Have Yesterday Standing By” was later produced by Walt Maddox under the shortened title of “Yesterday Standing By” on his group ‘These Gents’ on the Carnegie P.A based Western World Music label and a further release on the Soulvation Army label which Richard Calloway knew nothing about until some years later. Richard Calloway in the ensuing years has been involved in several Gospel music projects as both a performer and a producer. Both sides of this 45 are highly desirable 45s within the lowrider scene with the Hill District due to its scarcity becoming a prized item with collectors of this genre. 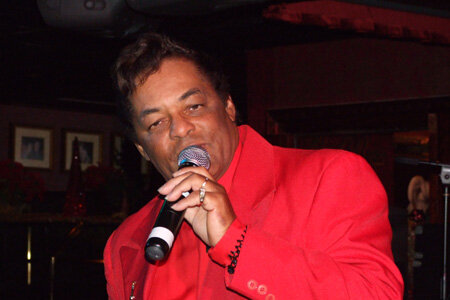