They grew out of the Chords & enjoyed a 3 year recording career in their own right.

The Popular Five were almost popular for a brief period in the late 60's. However, they soon faded from sight leaving the group's lead singer to cut a solo outing that escaped in August 1973. Even though none of their 45's charted, they did also gain release outside the US and so they form a legacy of sorts for this short lived soul group.

The Popular Five grew out of classic doo wop group the Chords. The Chords were responsible for one of the most iconic doo wop cuts of all time; "Sh-boom" but even this was a fluke as the track was actually released as the B side of that single. DJ's flipped the record though & in 1954. DJ's flipped the record though & in 1954 it was a big hit (No.2 R&B, No.5 pop). They secured some big live gigs and played the Apollo a couple of times. After that, recording wise, the group drifted a bit. More singles escaped but none really did that well, this being compounded by the fact that they had to change their name due to an earlier DC group having used it first. So they became the Sh-booms (corny or what) and limped on. Members drifted away and their recording career dried up around 1961. Little is known about what the guys did through the 60's but most likely they took day jobs.

But in 1967 their old leader, Jimmy Keys, gave it another try by forming soul group the Popular Five. Along with himself & ex Chord member Arthur Dicks, Walter Wilson was taken on as the 5 strong outfit's lead singer. Their 1st 45 as the Popular Five escaped on NY gospel label, Rae Cox in 67. This 45 again featured their old hit "Sh-boom" which was coupled with "Tomorrow Night" was produced by Larry Keys. Larry had started out as an organ player with orchestras, progressed to studio engineering & producing and in the 70's / 80's became a major old recording's remixer for CBS reissue projects. The group's 45 must have raised their profile as they were selected as one of the finalists in a big beer commercial contest. Schaefer Beer's (of New York & Baltimore) ran a Talent Hunt contest annually in the mid to late 60's (Betty LaVette also featured in one of these). Around 10 artists cut a Schaefer's beer ad and these were played on the radio, audiences voting for their favorite one & the successful act getting a prize (& lots of publicity). The publicity the group gained due to the Schaefer contest must have been welcome even though someone had embellished on the group's carrer up to then (claiming they had actually been formed in 1962).

Next up came two 45's on Minit, the 1st following on from their contest appearances, Schaefer having staged a festival featuring the acts in Central Park. The group cut an oldie "Little Bitty Pretty One" (no dount a song they performed on live shows) and coupled this with "I'm A Love Maker" which the group members had penned. This was arranged by Artie Butler who mainly seemed to work out of New York & Philly back then. The 45 made little impact when released in September 68 in the US but still managed to gain releases overseas in countries such as the UK & Germany. A 2nd 45 escaped on Minit in March 69 and again featured a song the group had written themselves; "Baby I Got It". This outing had been produced by Dallas Smith, a NY guy who was at the time a staffer at Liberty but would soon form Lionel Records.  Minit hired a promotion company to plug this track but again it failed to hit the national charts. Minit lost interest in the group but somehow they managed to hook up with Gene Chandler (most probably Jimmy Keys knew Gen from the old days of touring on the chitlin-circuit).

Gene, now signed to Mercury, was given his own label to run by Mercury; Mr. Chand. In 1970, he signed the group to his new label and re-cut their song “Baby I've Got It” in conjunction with a Chicago item “Best Friend – Worst Enemy”. This coupling formed the first single on Mr. Chand but again it did very little when released in summer 1970 . The group faded into obscurity quite soon afterwards and given that some of them were quite old by that time, I guess they just retired from the business. But almost exactly 3 years later, ex lead singer Warren Wilson returned with a solo outing on Capitol. He had penned both of the songs; “I Quit” and “Forget My Name” and both cuts were produced by Capitol Record's guy Jimmy Lenner. The new 45 (Capitol #3696) was tipped to chart in Billboard magazine when it was issued in August 73 but unfortunately it got lost in the shuffle. Capitol had a 2nd go in November that year, when it was put out again (this time as Capitol # 3756). It was a real shame that the disc failed at the time as both sides of the 45 feature decent tracks, “Forget My Name” being an especially good MS track. When the 45 sank without trace, Warren seemed to do likewise. So the group and it's members became just a memory in the music biz, however they had made a impact of sorts during their brief existence. 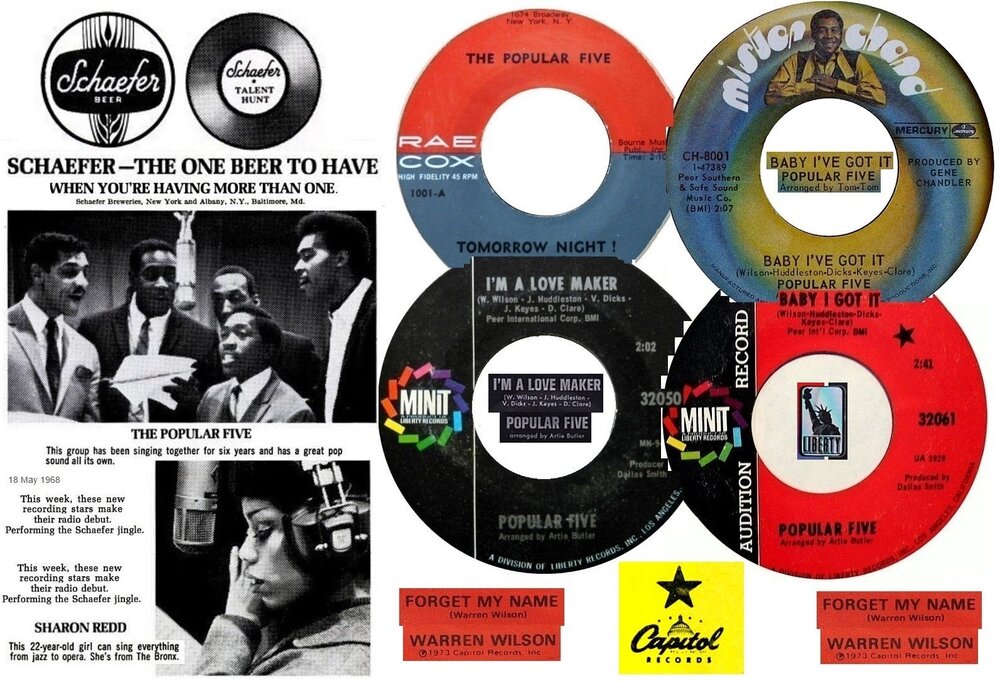