South Texas Rhythm ‘n’ Soul Review 2 is Kent’s second dip into Huey P Meaux’s rich RnB back catalogue.  Much has been written about Meaux’s insalubrious business activities and his abhorrent personal life, so I’ve tried to look past the man and focus solely on the music.  Meaux had no colour boundaries and was equally comfortable recording; black, white or hispanic artists in search of a hit and this current offering as with its predecessor reflects this.  This CD also contains a broad spectrum of musical styles, ranging from Pop and R&B dancers, through to Blues and Deep Soul with much more in-between.

The CD starts strongly with The Traits – Too Good To Be True, a storming horn driven “Blue Eyed” dancer and one of my favourite Meaux productions, a proper up-tempo soul recording.  As an accompaniment to the Traits, is a previously unreleased track by periodic member and lead singer of the aforementioned track, Dean Scott.  It’s a strong traditional “Northern” styled dancer with great burping horns and good girlie backing vocals and I wonder how well this would go down played loud at one of today’s venues.  Another traditional “Blue Eyed” Northern styled dancer is David “King” Thomas – You Better Investigate, a cover of the similarly titled Major Lance Okeh release from a few years prior.  It’s revealed in the sleeve-notes that Pete Smith identified that Thomas and Jay D Martin of “By Yourself” fame are one and the same.  It has a good driving beat, but doesn’t do much for me as I find it a bit too poppy.  Saying that I’ve never really liked “By Yourself” either, maybe it’s just his voice that doesn’t gel with my particular taste.  Another one of the more “Northern” tracks and one that people will be familiar with is the exceptional “Total Disaster” by professional baseball player Lee Maye.  It’s a top mid-tempo 60’s soul and one I never tire of hearing.

Margo White is represented by two offerings, the first; “I Got The Right To Cry” is a lovely sax laden early ballad, showing what a good singer she was.  The other is a competent version of “Neighbor Neighbor” and sounds like it was originally recorded in the 60’s but was only released on her 1978 Crazy Cajun LP.  I do keep comparing it to the rendition by Jimmy Hughes or even by the songs original artist Charles Berry and for me those versions pip it to the post.

Mentioning Charles Berry leads me onto his track included here.  “Half A Man” is a lovely gruff toe-tapping mid-pacer, as with the Margo White track was originally released as album track on one of the many tax efficient Crazy Cajun album projects Meaux did in the late 70’s.  Moving onto a slightly more up-tempo mode is the very catchy “I’m Losing You” by Chet McDowell and this is one of my favourites on the CD.

A couple of artists better known for their country and pop recordings are Warren Storm and Ronnie Milsap.  Storm, represented here by “The Bad Times Make The Good Times”, does nothing for me and I find it quite twee.  Conversely, Milsap hits us with the up-tempo “Wish You Were Here” a great 634-5789 clone that just oozes 60’s soul.

Two people who had more R&B success than many of the others included here are Jean Knight and Jo Jo Benson.  Jean Knight recorded for Meaux in the mid 60’s, with little success and “T’aint That The Truth” (a cover of an Ernie K-Doe song), is one of those recordings.  As with quite a few of Meaux’s projects, this was retrospectively released to cash-in following her success with “Mr Big Stuff” on Stax. The song was enhanced with overdubbing to give it a similar feel, but I think it just makes an ordinary recording, worse.  Jo Jo Benson along with Peggy Scott did surprising well duetting together, which included hits on Shelby Singleton’s SSS International label.  As well as recording them as a pair Meaux recorded them individually as solo artists and included here is Benson’s previously unreleased cover of the Barbara Lynn classic “You’re Losing Me”.  Now this is one of my favourite records by one of my favourite artists, so this was a “big ask” for me to like it – But I Do!!!

Moving onto the R&B side; Joe Medwick’s “After Hour Man” was originally previously unreleased and saw the light of day on an Edsel CD in 2000.  Big Sam’s “All About Love” is a rockin’ piano lead dancer, Johnny Adams’ “Spunky Onions” is a great funky dance craze number and Prince Charles’ “Sick”, makes you want to nod your head in time with the beat, all very nice indeed.  Onto a couple of Blues numbers with Jackie Paine – Skid Row Blues & Joe Fritz – Good Doctor Sweet Soul, both are rolling guitar lead Blues and good additions to the set.

Moving onto the Ballads and Deep soul and there are plenty here to please those with a liking for the morose.  Representing the Chicano element of the Texas music scene is Rocky Gil and the Bishops, with a wonderful cover of the Georgie Boy song “The Pleasures Of My Woman” and for me it stands shoulder to shoulder with original version.  Jackie Payne’s “At Your Wedding” is classic Deep Soul and tells a sad story of lost love (don’t they all) and Henry Moore’s “I’m Losing You” is another highlight of the CD and this recording should be in every collection, it’s that good.  The organ intro and muted horns on Luvenia Lewis’ “Tender Loving pain” complement her voice to perfection, another winner in my book.  Joe Hughes – The Rain Came is simple in its production, but hits all the right spots when it comes to soul.  One of my last comments is reserved for Eugene Gamble’s “Strange Love”.  This previously unreleased gem sat in-the-can for nearly 50 years and it’s a crime that something this good should only see the light of day in 2015.

Musically, this is a very good CD and highlights the many facets of Meaux’s R&B back catalogue and is a good companion to Kent’s previous Meaux CD of a few years back.  As with the previous CD, compilation honours go to Tony Rounce and as always the sleeve-notes packed with pictures, label shots and interesting backstories.

10. At Your Wedding - Jackie Paine

11. Wish You Were Here - Ronnie Milsap

16. The Pleasure Of My Woman - Rocky Gil And The Bishops 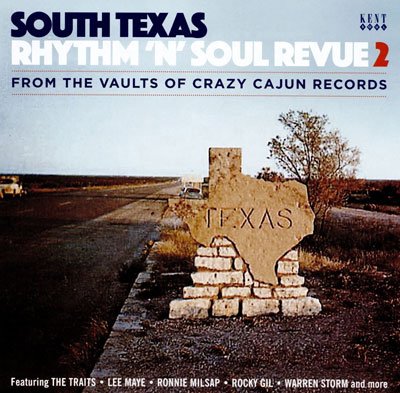