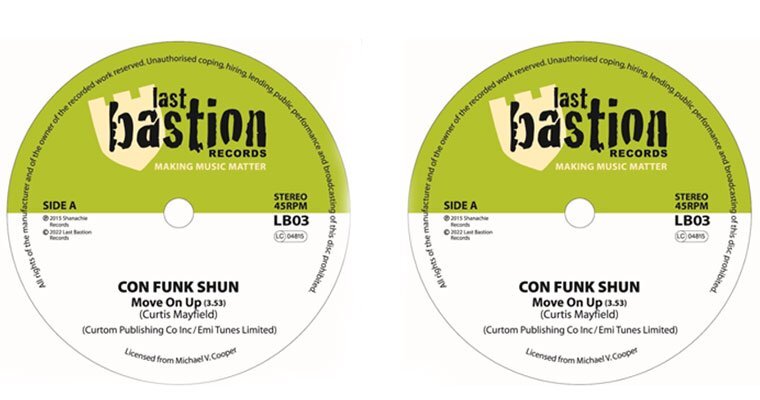 Details on the next Last Bastion Records release (LB03)

First time out on vinyl for both tracks, the details follow below

First time release, licensed direct from Con Funk Shun, the only other way of getting this track previously was a cd only, longer version.

Then there’s the remarkable B side, with Jay Cee making his debut and already the sound track to a short film!

Limited to 300 with no repress.

Currently uncertain when purchase will be possible due to the well reported vinyl manufacturing plants delays and backlog.

It’s a ‘marmite’ record for sure and perhaps not one for the traditionalists. That said, it’s already picking up rave reviews as a result of a few test presses being played out and already setting dance floors alight, but don’t just take our word for it ….

‘WOWZER! BRILLIANT Supercharged, pumped up funky driving punchy attititude dance floor detonator and sure to shake the dancefloors and will most definitely be in my DJ box.’

‘Con Funk Shuns 'Move on Up' is the perfect example of the under ground soul scenes acceptance of an alternative musical formula.  A hint of cajun, a perfect vocal delivery and a musical amalgamation that is set to be a new classic.’

‘Con Funk Shun sprinkle a helping of Cajun spice across their tasty re-working of 'Move on Up'. York based Jay Cee showcases his Nu-Soul talent on 'I've Been Thinking', his debut release. You shouldn't need to, err, 'think it over’ twice to define the sample. High quality, on both contrastingly different, sides, another Last Bastion winner.'

Remarkably American soul & funk icons Con Funk Shun are under the radar for many in the UK, with no chart recognition here, a small fan base and having never toured in Europe.

It's therefore Last Bastion Records privilege not only to highlight Con Funk Shun but also to commit to vinyl for the 1st time, their incredible interpretation of that soul classic Curtis Mayfields'  'Move on Up'. (Being a newly discovered shorter version than that on Con Funk Shuns’ 2015 ‘more than love cd LP , the Last Bastion 45  release will be first time in any media format).

Already a requested sound in dj sets and radio shows via an acetate, It's the sound of the Louisiana swamps blending that Zyedeco beat with an accordion(!) and a formidable horn section. The result: a unique and infectious arrangement - a dance groove which doesn't dimmish the socially conscious lyrics which would surely have Curtis smiling.

Signed to Mercury Records in 1976 the debut 45 'sho feels good to me' was a moderate US chart hit and followed up with 'Ffun' an out of the box dance smash, No.1 in the Soul charts and the LPs 'Con Funk Shun' and 'Secrets' then rocketed to Gold status in 1976 & 77.

Originally called 'Project Soul' they were part of the burgeoning funk movement alongside the Isley Brothers and Earth Wind and Fire, getting their 1st break backing Stax act 'Soul Children'. Following a move to Memphis, Project Soul became Con Funk Shun named after the old Harvey Fuguo and the Nite Liters song.

Their 'must see' performances quickly elevated the band to the hottest act in town with funky dance numbers such as 'Ms. Got the lady', 'Chase me' and the Earth Wind and Fire influenced 'Two tight', complimented by trade mark mid tempo jams such as 'Love's train' and their smooth x-over hit 'Baby I'm hooked'.

Then in 1987, internal disputes and emerging different musical tastes on the USA soul & funk scene then lead to the group splitting acrimoniously.

The group's rebirth led to a well received live album for Intersound Records in 1996, then in

2005, the band received the prestigious Soul Tracks award as the 'Best Duo or Band'.

Now an extremely popular live act once more in North America. Con Funk Shun continue today and they celebrated their 45th with a series of sellout shows in the USA and the release of digital remastered previous Lps including 'The Best Of... ',  The Best Of...Vol. 2', 'Greatest Hits' etc. in 2015 their 'More than Love' cd was released to critical acclaim. 2022 sees a massive North American tour and dates in Australia planned.

Con funk Shuns' 'Move on Up' was recorded in 2014 at The Soundform studios, California and features, to rapturous applause,  in their live sets. It's a leave your seats, stand up and dance moment!