Spinning Around - A History of The Soul Lp - Book Review

A History of the Soul LP Vol.1 by John Lias


If any soul fans have coffee tables, then this is the definitive book to place atop that table. Not only does it look very impressive with it's bold black hardback cover and red graphics with white text, but it will impress any visitors that pick it up. What it does is what it says on the cover; this encyclopedia of soul knowledge runs to over 400 pages and lists just about every detail a fan would wish to know about all soul LP's made by artists who's names fall into the A to K band.


However, if you're not looking for a 'coffee table' item to show off your credibility, what would this book do for you. Put simply, if you're into albums made by soul artists then this will complete your life. You don't get any facts on how much each LP listed is worth, but then why would you want to depress yourself with such information. A 'little birdie' informs me that at least one LP has been missed from this weighty tome but I'm not the type to snitch and inform you what that is. The book opens with a preface and then an introduction which explain what it is that is about to follow. Then it's straight into the 'meat & two veg' facts. On page one of the album listing we get both Ace Spectrum and Barbara Acklin, so it doesn't take long to get to the good stuff. To say that the descriptions of both's album output is complete is an understatement. You get life facts on the artists where appropriate (& known) – for instance did you know that Barbara Acklin started out at her record company as a secretary !! With regard to Ace Spectrum, we learn who the main (long term) group members were and about all the different writers / arrangers that they worked with. The book is a very wordy affair so if you're wanting visual reminders (LP cover pictures) to go with the text, then you're going to be disappointed. But, that would make it a whole different manual. Plus the colour printing required and extra space needed would push the price up beyond the reach of most prospective buyers. 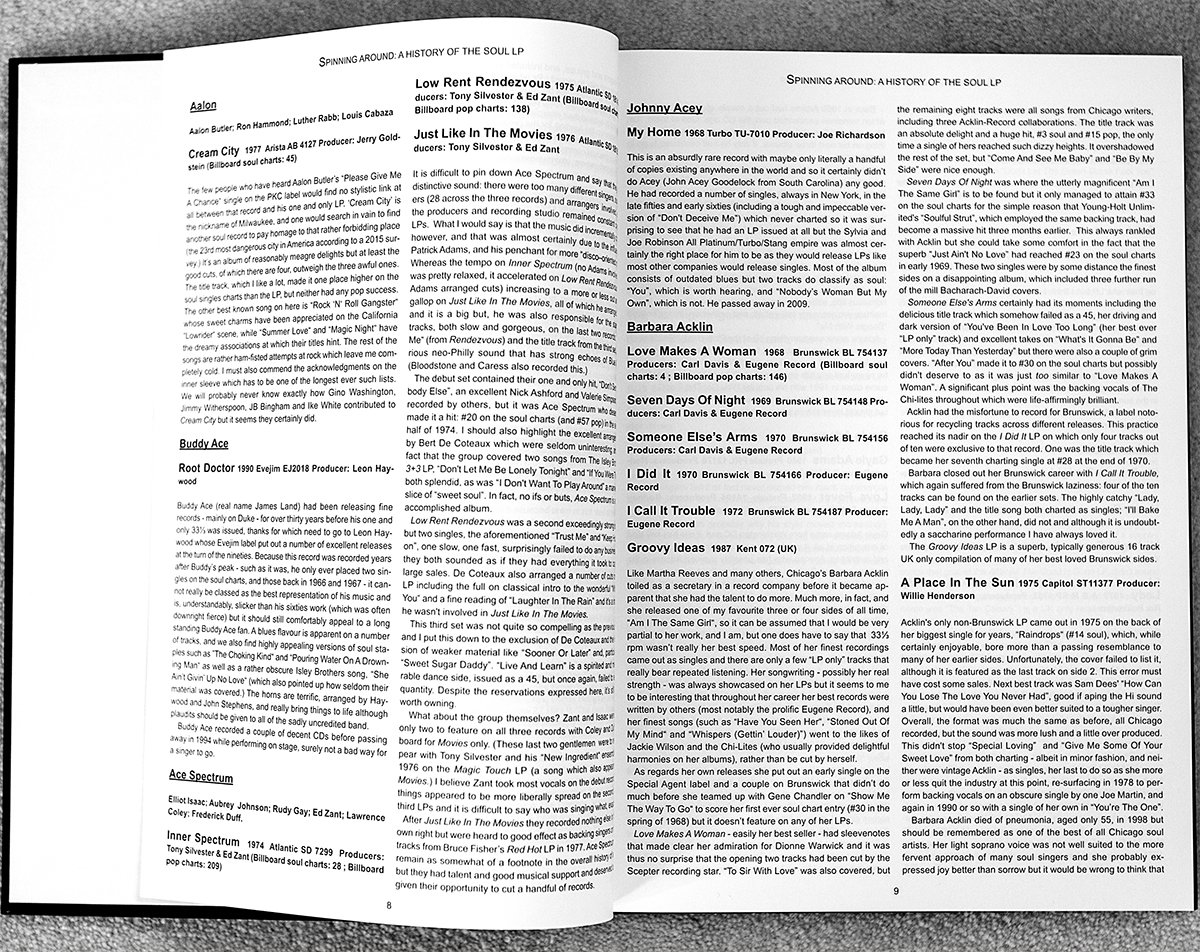 Of course, John brings his own perspective to each album that is dealt with in this volume. If you're a massive fan of mid 70's Casino stompers then I doubt John's view on all things soulful will mesh with yours. But then if you're a Wigan-era zealot, you'll mainly be interested in facts on 45's not LP's. We don't get any info on compilation albums in here, though the finest of such releases (for instance the Impressions UK 'Big Sixteen' releases) do get a mention in passing. Indeed, over four pages are needed to cover the complete works of Chicago's most magnificent group – the Impressions. The facts on the group and their LP releases are split up into different sections to account for the changes in their personnel / sound down the years. I like John's opinion on this outfit (one of the greatest groups of all time) so I will not let my bias show by quoting detail by the shovelful. Lets just say, that mentions for Big 16 Vol.1 and Vol.2 had to be made even though these were compilations, however as they are single-artist affairs, they just managed to scrape in (getting over John's qualification bar). Mind you, the group's last ABC outing (a collection of mainly old standards that must have been sitting in the vaults) does get a panning. 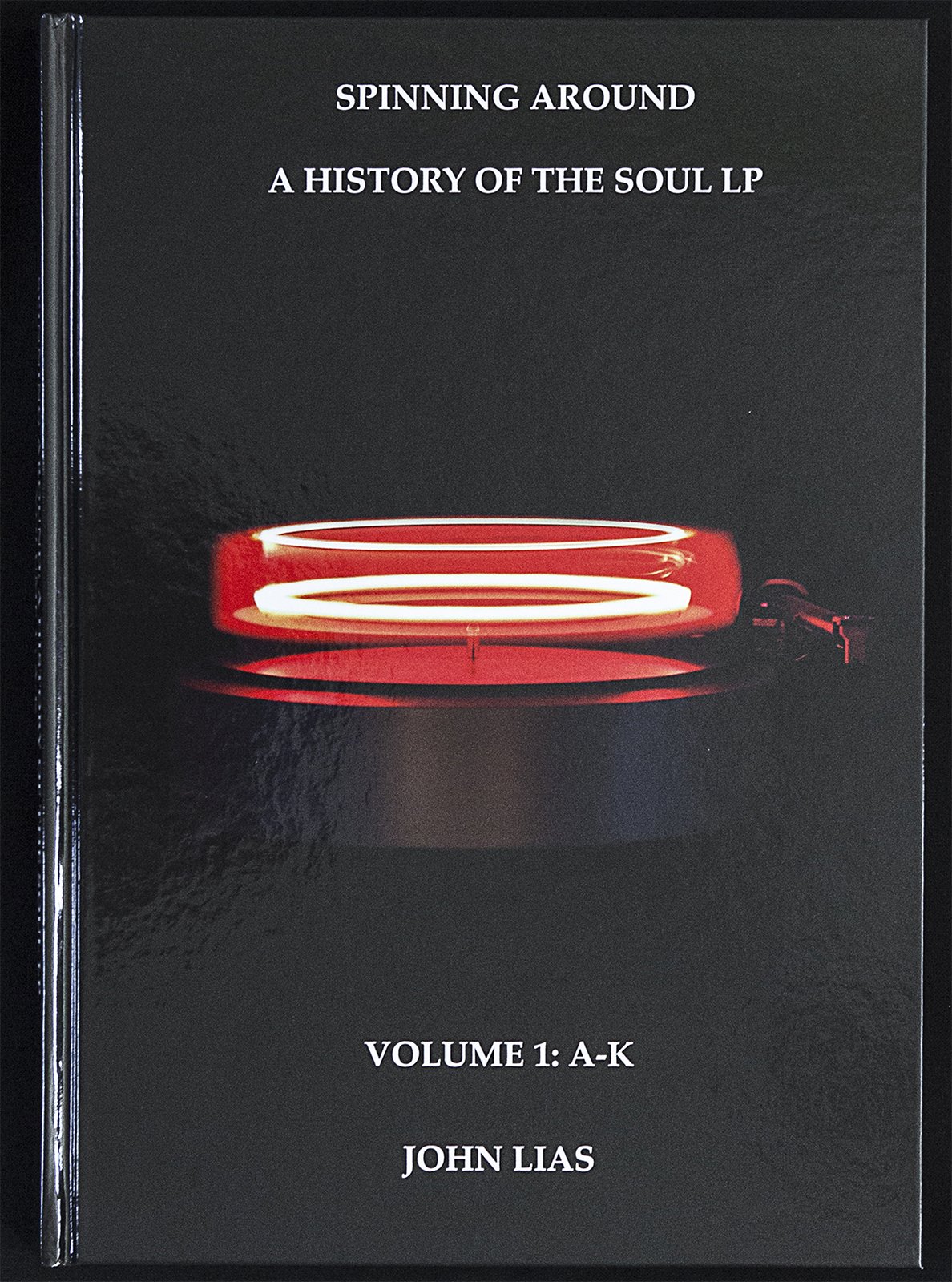 But you just need to open up the book at any random page; lets say for this review the spread on pages 302/303 and you get the whole truth with regard to some artists LP output. On these two pages we get the lowdown on Brenda Holloway (including her UK 'Artistry of' release), Eddie Holloway & Loleatta Holloway. John starts the review of Brenda's work with a statement that may get some Motown fans pondering. In his piece on Eddie Holloway, the guy's 45 output features large in the explanatory facts and Loleatta gets over a complete page of fascinating detail to cover her output. Each artist takes their turn in alphabetical order, both the greats and the minor players. So not only do you get to read all about Marvin Gaye, Eddie Kendricks and Gladys Knight but also about the likes of Perk Badger, the Bell Brothers, Beverly & Duane, the recently passed C L Blast (I have that elusive 'Made In Africa' LP John !!) and Lou Bond. It's not a book to read from cover to cover in one go (IMHO) but as a resource for reference, I don't think it could have been improved. If Wikipedia ever decided to set up a dedicated section on soul music, they wouldn't need to go anywhere else than this book to have (almost) the complete story. John has already assured buyers that, as long as sales levels meet expectations, then Volume 2 is a stone cold certainty. It needs to be, as that coffee table has just the empty spot that another scholarly work would fill to perfection. If, however, what you're after is the definitive reference book on soul, then I don't think you need to look any further than this 5* effort.

@johndelve posted the below ordering information in his earlier forum post

Anyone who is interested in buying a copy contact me directly at john.lias@googlemail.com and I can ship copies directly.
Price is £20 + £2.80 postage anywhere in UK.
Same selling price holds true for other parts of the world but postage is going to be expensive, I'm afraid, as book is heavy. 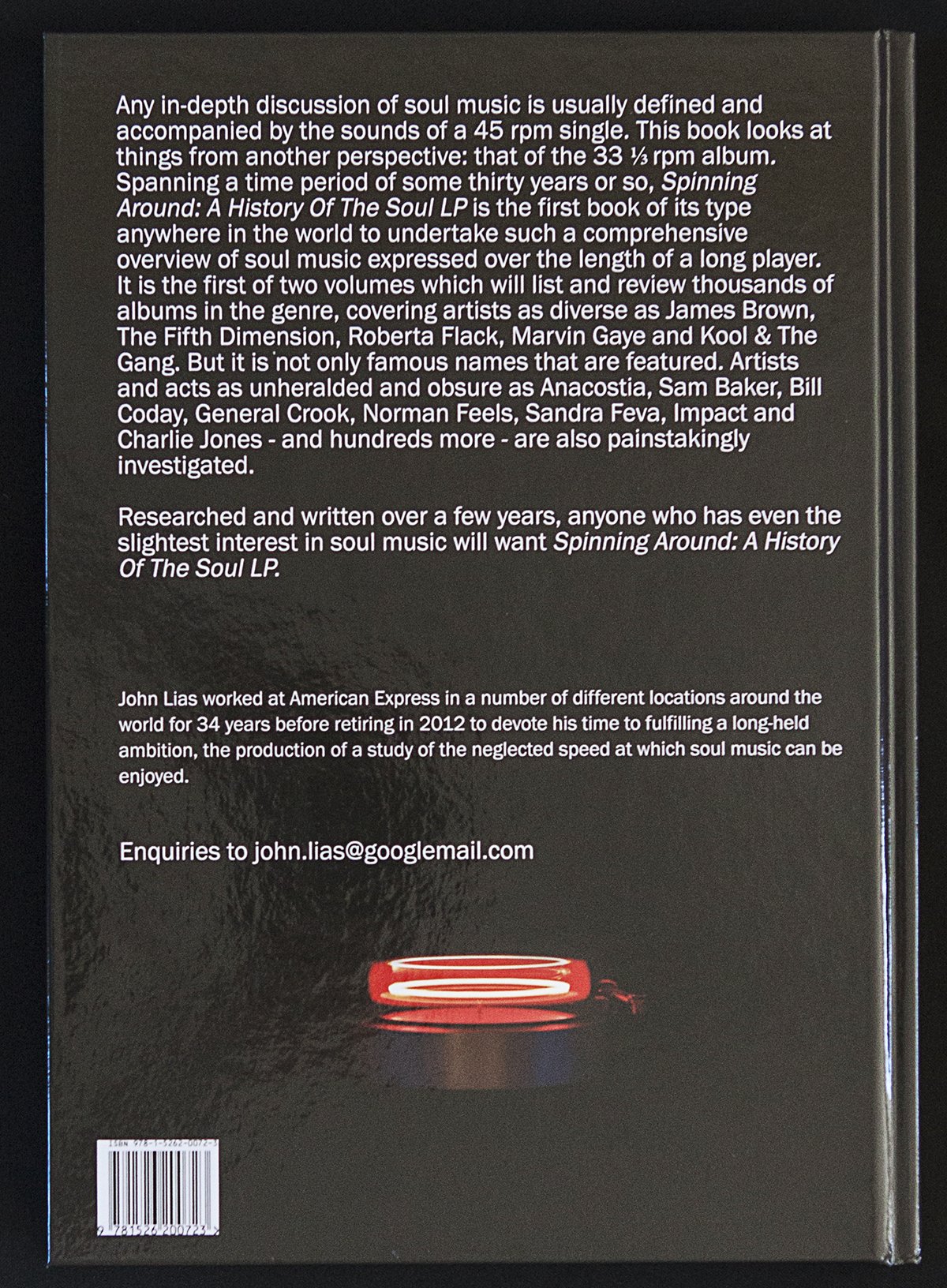