three tracks that have never seen the light...

The current crop of seven inch box sets have divided opinion amongst collectors.  Some say it has dumbed down the Dj fraternity, some want to see more previously unissued material or LP only tracks rather than tracks that have previously had a release on a 45 and in some cases are pretty common.  I don’t know the criteria laid down when compiling or how much quality unissued material is available. It could be more sets are scheduled and a balance has to be struck.

Whatever the complaints they have struck a chord amongst some collectors and I guess deejays too. The box sets are selling very well and in some cases selling out within weeks of going on sale.…I guess that is what it is all about and not about the purists view about collecting.

Here we have the second box set featuring the famed Chess label, a label synonymous with Soul Music.  Preferred by many for its gritty harder more soulful vocals to the sweeter more pop orientated Motown sound. Chess, alongside its subsidiaries Checker, Cadet and Argo recorded some of the all time greats of Blues, R&B and Soul music over a 25 year period.

Harborough Horace, aka Ady Croasdell has compiled the latest box set which sees three tracks that have never seen the light of day on vinyl, previously laying dormant in the vaults until getting a release via cd many years later.  There is also on alternative version, Jamo Thomas with “Must I Holler”.

Terry Callier is the very first track and for the first time released on vinyl, it is the best of the set for me too.  I cannot believe something of this quality was left in the can for 30 years before being retrieved for a CD release.  An excellent dancer. It should see plenty of turntable action.  Also previously unreleased is Jackie Ross with “My Square” very reminiscent of her released material such as “Selfish One”.  Sugar Pie DeSanto sees the third unreleased track, the gritty R&B number "Talkin’, Dreamin’, Boastin’".  Jamo Thomas sees an alternative take of “Must I Holler” which Ady states shares the backing of Jamo’s “Stop The Baby”.  The tempo is quicker and the horns come in later.

The rest of the discs are made up previously released Chess favourites of the Northern Soul Scene, Jo Ann Garrett with “A Whole New Plan”, Densie LaSalle “A Love Reputation”, Marlena Shaw “Let’s Wade In Water”, The Vashonettes “A Mighty Good Lover” and the Gospel Classics “More Love, That’s What We Need”.  Greg Perry’s first recording “Head Over Heals (In Love) gets a worthy inclusion as does the final recording of the Vibrations, “Make It Last”. Mod Classic “Two In The Morning” from Spooner’s Crowd is the last track on disc 7.

Resplendent with black and gold & black and silver labels, all in a plain black sleeve with Chess emblazoned in gold across the top. The box set is  accompanied with an informative booklet compiled by Ady with plenty of information and photographs to browse whilst listening.

I’d give the set three out of five although I personally would like to have seen maybe one or two more unissued or LP only tracks. The discs do look good and the quality is excellent.

Record Four A. The Vashonettes – A Mighty Good Lover B. Marlena Shaw – Let’s Wade In The Water

Record Five A. Jamo Thomas – Must I Holler (Alternative version) B. The Chessmen – Why Can’t I Be Your Man

Record Six A. Greg Perry – Head Over Heels (In Love) B. The Gospel Classics – More Love, That’s What We Need

Record Seven A. The Vibrations – Make It Last B. Spooner’s Crowd – Two In The Morning 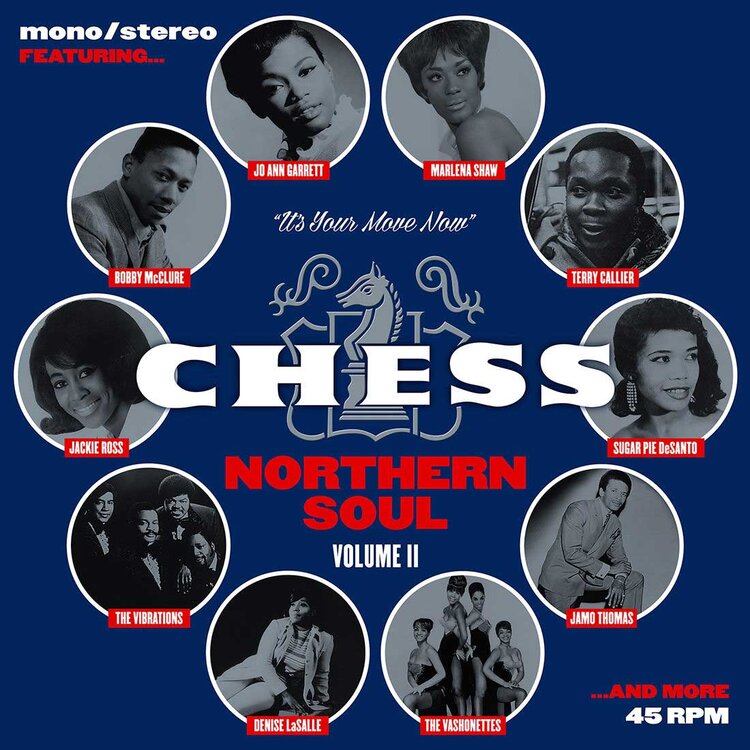 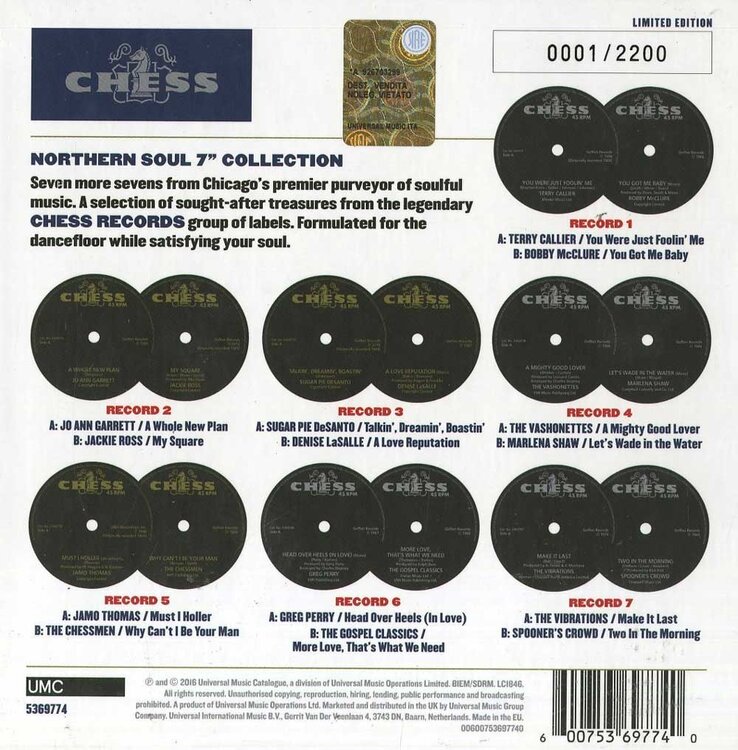