Just a highlight word about a recently stumbled upon youtube 1967 video that may be of interest.

The video is simply titled 'The Cheetah', which doesn't really give a lot away but as the clip plays it turns out to be a 24 min documentary type programme from 1967 concerning itself with a 1960s/70s New York club... The Cheetah.

At first, it starts off with a familiar 60s hip groovy scene sort of vibe 'The Cheetah: A Mod Mecca' says the screen, followed by a couple of minutes of two couples shopping!  The programme moves on and we follow the couples to the club and the dance floor where a live group is just getting going, this group is titled 'The Esquires' but they're not the ones you may hope for, seems like it's the Canadian group of the same name.

Two or 3 tracks, interspersed with some french accented commentary about discotheques, then we get to the main act, The Jewels, yep its 'The Jewels' with renowned founder/leader 'Lady Bo' aka Peggy Jones.

Peggy, who while a long time part of Bo Diddley's team still managed to  maintain a varied separate music career which included being a songwriter, session musician, and leading her own band, The Jewels (aka as the Fabulous Jewels, Lady Bo and the Family Jewels, and various other names) and may be better know to some for their MGM Wigan classic ' We Got Togetherness'

The Jewels live at The Cheetah

The video is set up to start from The Jewels halfway in, use the rewind to view the video completely

'The most elaborate discotheque was Cheetah, on Broadway and 53rd Street, where everybody, according to Life, looked like "a kook in a Kubla Khanteen." The three thousand colored lightbulbs dimmed and flicked and popped into an infinity of light patterns, reflecting off shiny aluminum sheets. Cheetah held two thousand people and offered not only dancing but a library, a movie room, and color television. A live album by The Esquires, Mike St Shaw and the Prophets, and The Thunder Frog Ensemble was recorded there in 1966 and released by Audio Fidelity Records as Where It's At — Cheetah(1966, AFSD 6168).' 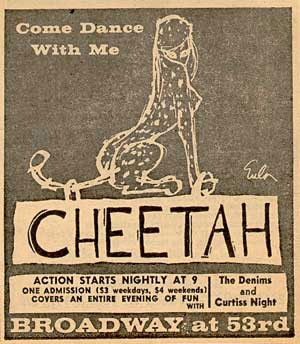