The Holidays: Getting Kind Of Soulful - New Soul Junction Release

Superb compilation the Holidays and New Holidays material from 1969 through the mid 70s.

The Holidays: Getting Kind Of Soulful. SJCD5012 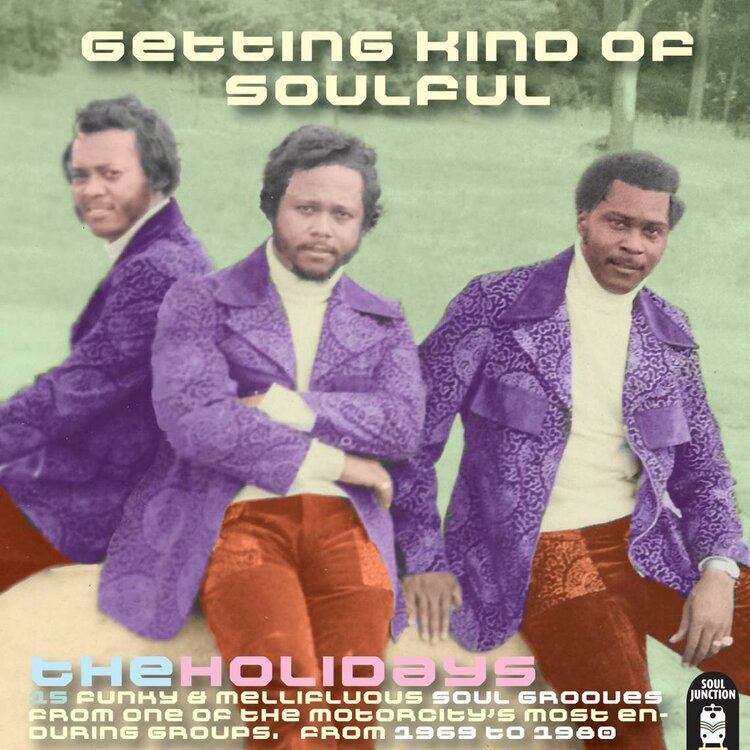 There were several groups within the Detroit music scene of the 1960’s that shared the name of ‘The Holidays’. But this cd compilation is dedicated to the one whose main protagonists were the brothers Jack and James Holland. Both sides of their Soul Hawk 45 apart, it is their own productions for the Marathon, Ron-Hol and Rob-Ron labels both issued and previously unissued that has been included in this compilation. 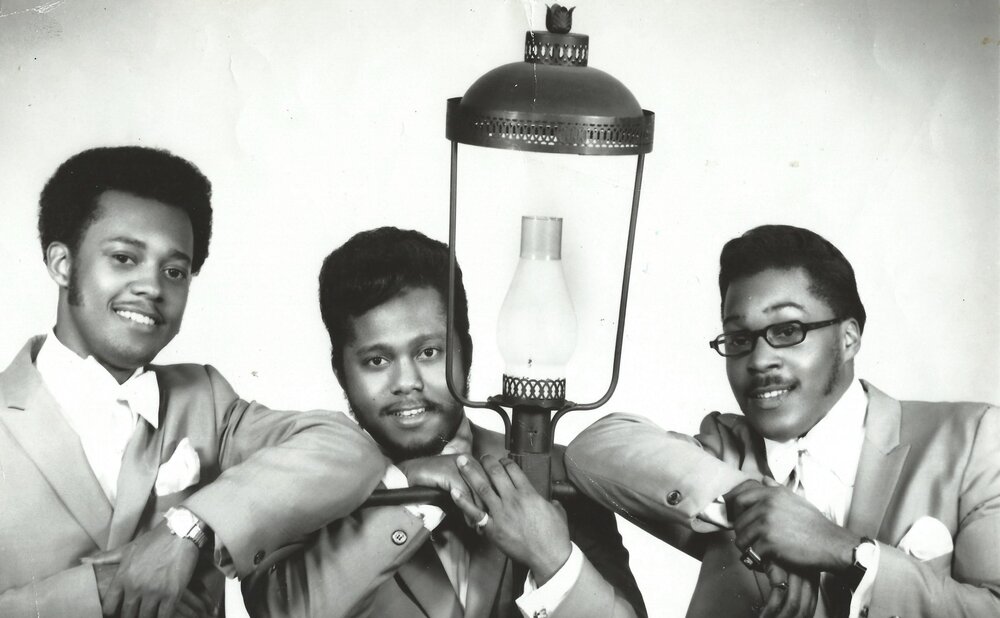 Beginning with their 1969 ‘Popcorn’ Wylie’s produced, solitary Soul Hawk 45 release “Maybe So, Maybe No” issued under the group name of ‘The New Holidays’. The currently in demand  A-side “Maybe So, Maybe No”  featured Jack and Jimmy Holland, Maurice Wise and former Motown group ‘The Contours’ ex member Joe Billingslea.  The flipside of the Soul Hawk release “If I Only Knew” is an excellent cover version of a previous Jimmy (Soul) Clark recording “If I Only Knew Then (What I Know Now)” which  was recorded at a later session to “Maybe So, Maybe No”  using a slightly different line up with Joe Billingslea making way for a youthful Elliot Smith. 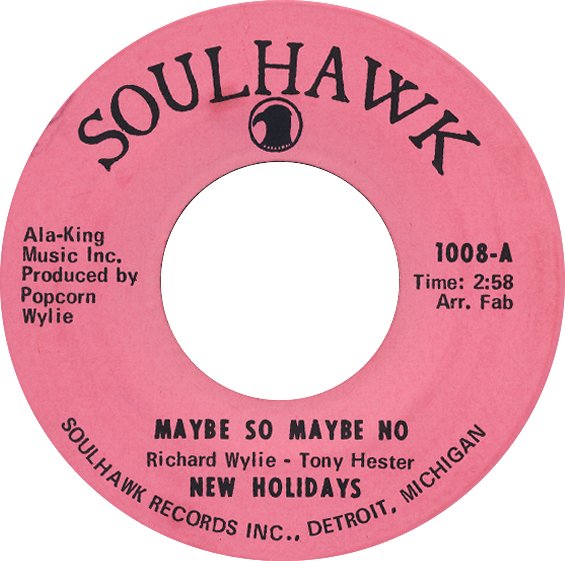 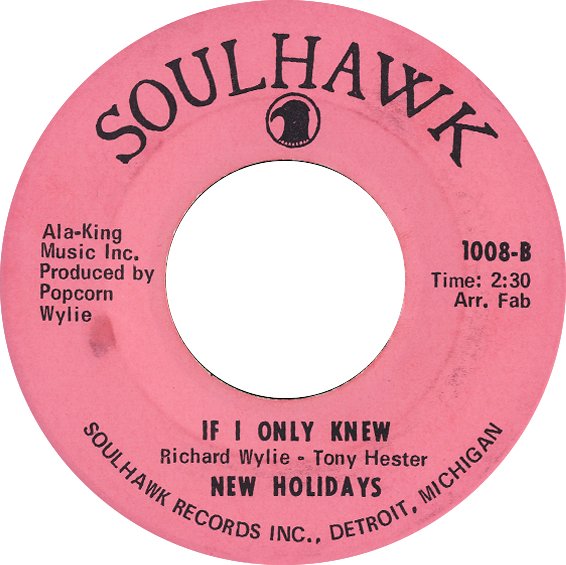 “Maybe So, Maybe No” made sufficient noise in and around Detroit for it to be picked up for national distribution by Armen Boladian’s, Westbound label. But the flipside of this release “My Baby Ain’t No Plaything” although credited as The New Holidays is definitely not them singing.

During their time at Soul Hawk records The New Holidays made several rehearsal recordings of songs that Popcorn’s partner wordsmith Tony Hester (ironically a former member of the Golden World group The Holiday’s who recorded “I’ll Love You Forever”) had composed. Songs such as “In The Rain” and “The Devil Is Dope” amongst others, which although considered for potential release on Soul Hawk, never came out following a falling out between Popcorn and Hester. Later becoming hit songs for another Detroit ensemble, The Dramatics. Incidentally blue eyed singer and native Detroiter Mayer Hawthorne recorded a cover version of “Maybe So, Maybe No” during 2009.

By 1972 The Holidays although still performing in clubs were without a record company behind them, so they made the decision to go it alone and formed their own production company, releasing their first recording during the same year on their newly formed Marathon label. This initial release was an excellent double sider “I’m So Glad (That I Met You)” (Marathon 257). A wonderfully upbeat and joyous song of  a new found love  co-written by  James Holland and Sylvester Potts a former member of the Motown group ‘The Contours’.  While the flipside “Too Many Times” again a Sylvester Potts and Jimmy Holland composition is  totally the opposite being a song concentrating on a relationship of lies and deceit. Both the issued 45 version and the longer unissued master tape version of “Too Many Times” are featured. The group line-up on this releases included Jack and Jimmy Holland along with Maurice Wise and was recorded under the artist name of ‘The Fabulous Holidays.

For their next release ‘The Holidays’ decided to enlist the help of a neighbour of their former employer ‘Popcorn’ Wylie, one Mr Tyrone Fairchild whom the Holidays thought through his many contacts would open doors for them. 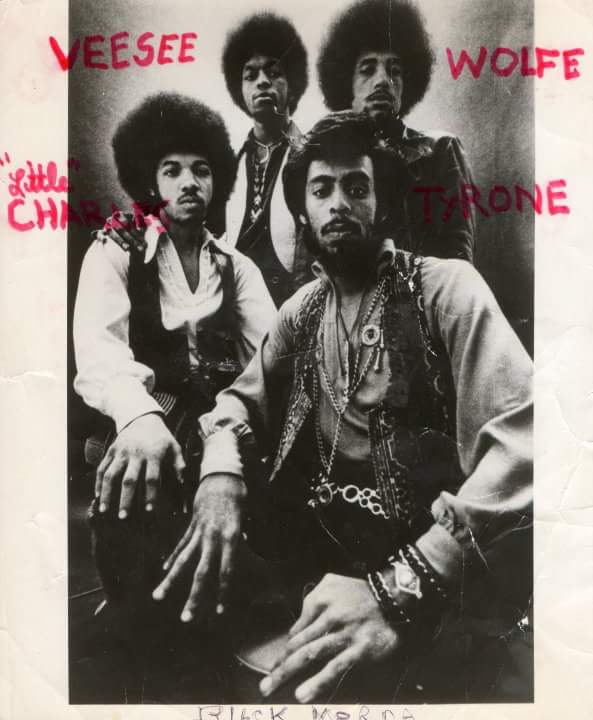 During 1975 The Holidays resumed their acquaintance with former record store owner Ronald Holmes.  Holmes promised to help The Holidays secure a recording deal with a major label although some interest was reputedly shown by a New York based major nothing actually ever materialised. 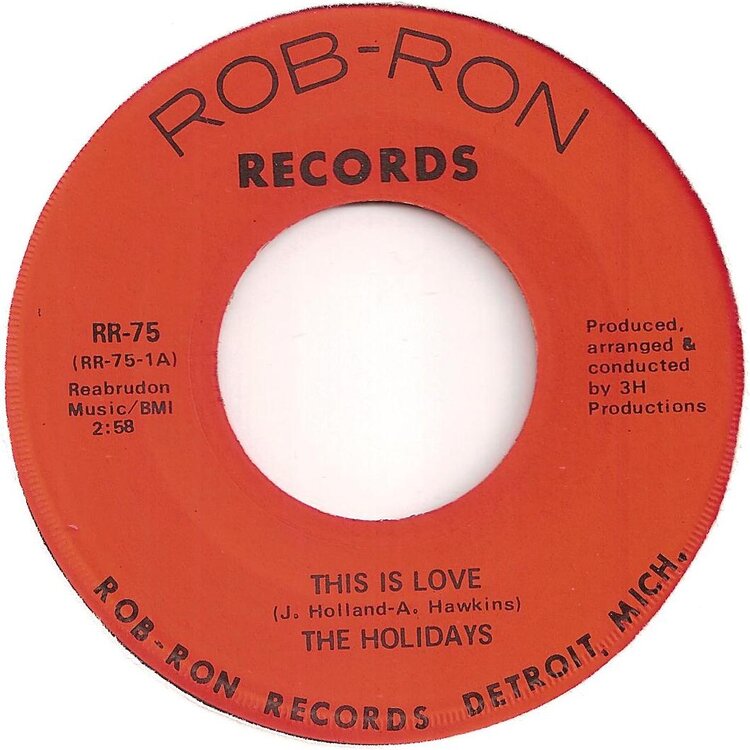 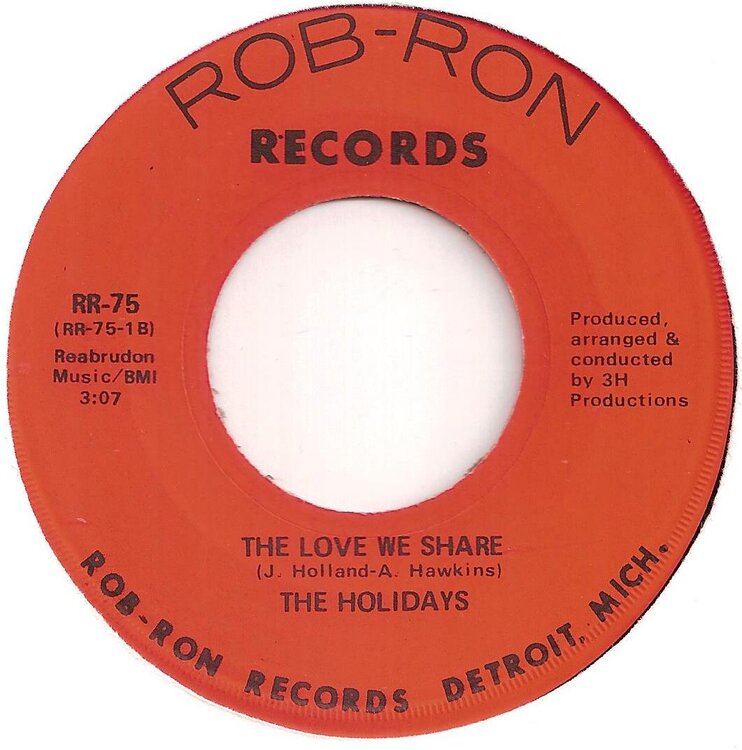 So through this renewed collaboration The Holidays released “This Is Love b/w The Love We Share” on the Rob-Ron (RR-75) label. Two excellent mid tempo sides, firstly the A-side “This Is Love (A Little Understanding)” to give it its full title. With Maurice Wise performing the lead vocal duties on this side only. While the flipside “The Love We Share” saw Jack, James and Charles Hawkins all alternate in the role of lead singer alongside a fourth featured vocalist William Thomas Ray (The uncle of Charles Hawkins). The “Love We Share” was recorded twice. Firstly as the issued 45 version under the shortened title of “The Love We Share” and as an unissued longer version under the title of “(Been Together Too Long) The Love We Share” but with slightly different lyrics, both versions have been included on this compilation. During 1976 a further Holland/Holmes collaboration saw the release of the message song “Procrastinate (Why Do We)” (Ron-Hol 76) recorded as both vocal and instrumental versions, with the Holland brothers cousin, James ‘Jay’ Reid joining them for this release only, Maurice Wise by then having quit the group. After this release Ronald Holmes and the Holidays parted company. 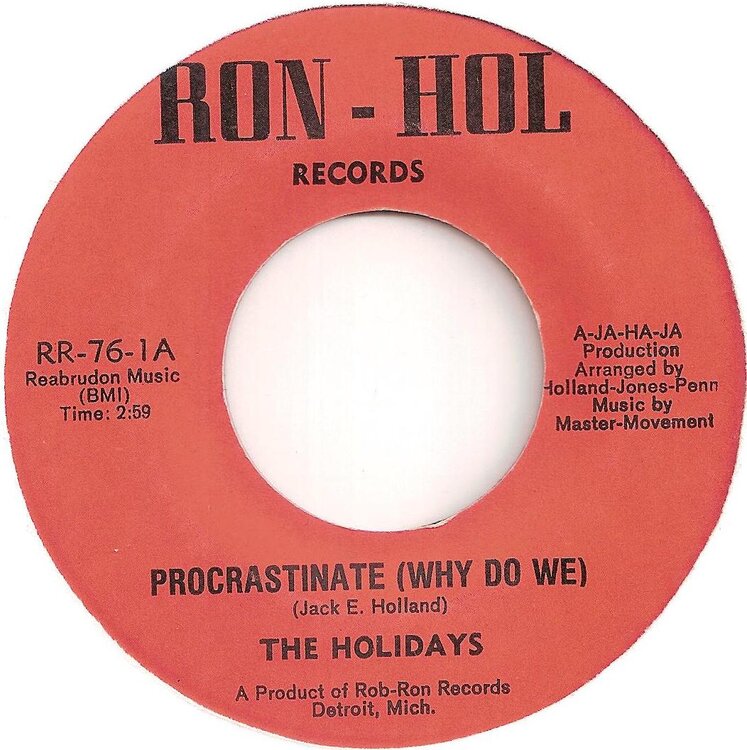 During late 1976 into 1977 Jack and James Holland wrote and produced two further songs which they recorded with Charles Hawkins. The up tempo dance track “You Make Me Weak” and the less frenetic “Lost Love” although never issued at the time both songs gain their initial release on this compilation. In March of 1978 James who after studying accountancy at college took a job with the State Of Michigan Auditing Insurance Companies, he later moved and worked in the Virgin Isles for awhile. Meanwhile brother Jack embarked on a college Dental Technology course, were he learned how to make dental plates. He was so good at it that he was even offered a job as a teacher there, but declined the offer, becoming a full time band promoter and club master of ceremonies instead. 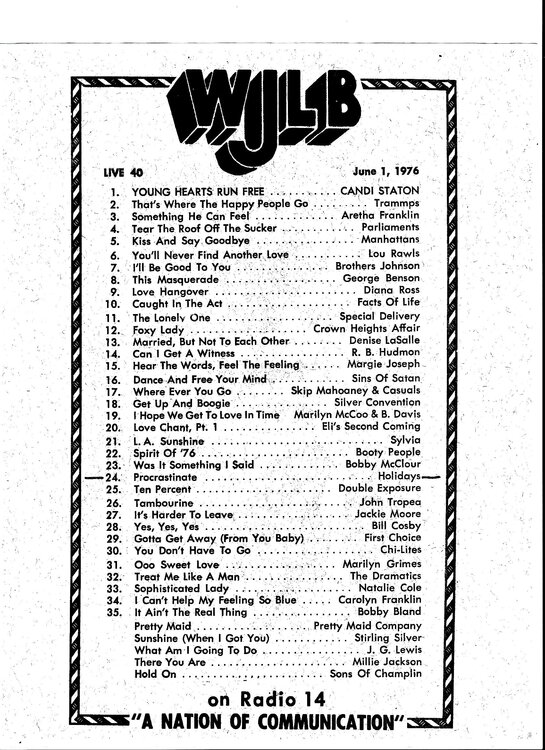 The Holidays did have one last roll of the dice in the record industry when in 1980 when they re-released a 45 featuring two of their previous recordings “Getting Kind Of Serious” backed with “(Why Do We) Procrastinate” ( vocal version), under the artist name of just ‘Holiday’.

Throughout the production and recording of the Holidays 1970’s output there has always been both a strong friendship and working relationship between the Holland and Hawkins families. Brothers Anthony (Wolf) and Charles Hawkins alongside bassist VC Lamont Veasey and drummer Tyrone Hite  along with two guest singers had begun their own recording careers during the mid 60’s under the group name of The Fabulous Impacts with the release of  “My Baby/I’ll Be Crying” on the bomb label.. Although they are better known as the founding members of the 1970’s Detroit Psychedelic Rock and later Funk band ‘Black Merda’ ( Merda being an African-American slang spelling of the word Murder).  All these guys had previously learnt their trade as session musicians at the Fortune and Golden World Studio’s. During the late 60’s and early 1970’s they also worked as Edwin Starr’s tour band ‘The Soul Agents’. While Anthony Hawkins and V.C. Veasey also cut their teeth as songwriters on Robert Ward’s 1967 Groovesville recording “I Will Fear No Evil”. Between circa 1974-1977 the Holland and Hawkins brothers operated their own production company ‘HHH Productions’ releasing two 45 singles on their Amtonac label. Their first release was cut on the Hawkins brothers elder sister Linnie Walker “People Let Me Know/Darn Well” (Amtonac 001) while their other release was recorded on a blue eyed group of musicians called Bland Allison (taking their name from Bland Allison Act of 1878) The title of the recording was “Can’t Get Back To You Again” (Part1 & 2) (Amtonac 18476).

Following Jack Holland’s sudden death due to a brain aneurysm on the 21ST of January 1985 (his 40th birthday), James Holland was so sadden by this loss of his younger brother that he quit the music business for good only returning recently to collaborate on this project. 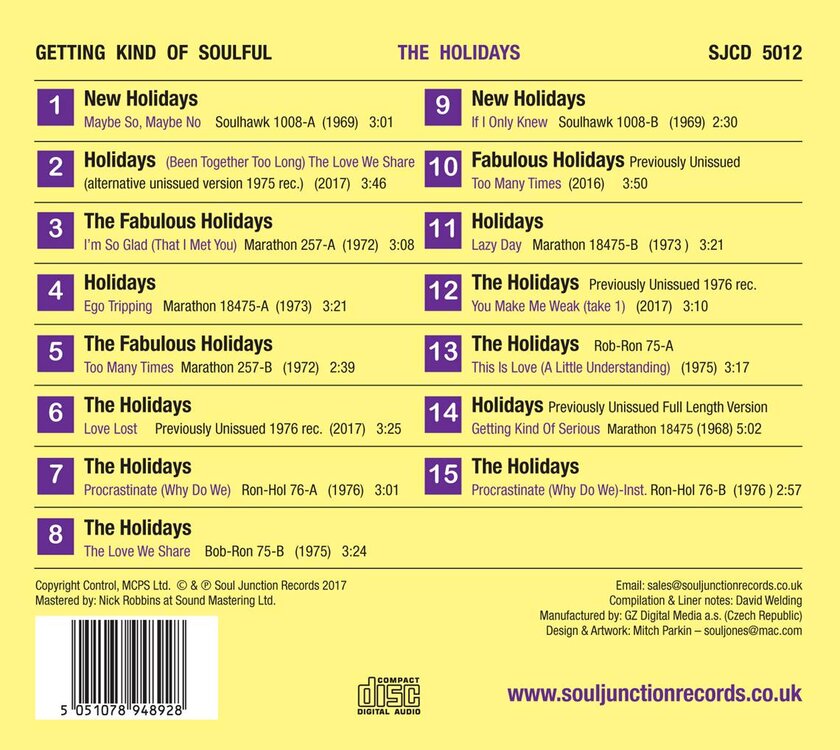