The CD opens with “Party Time” by Chico & Buddy (of the Tokays but performing here as a duo). Even though this dates from 1970, it has the throwback sound of a mid 60's Sam & Dave call & response track. Fast and quite funky, the strong vocals really make this cut. A track that could successfully grace the decks at any late night soul party.

The CD features quite a few numbers from Dave Hamilton himself and most are mainly instrumental dominated cuts that showcase Dave's guitar work. “When I Say Groove” and “Cracklin Bread” (vocal version) are both uptempo and have a psychedelic feel.

However track 23 is something quite different. On this, “I'm Shooting High”, Dave tackles a classy vocal song which he takes at mid-tempo pace. He doesn't possess the best voice in the world but his performance makes this an effective floater of some renown. Little Ann exhibits her potent vocal style on a chugger; “I Gotta Have You -- alt take”. Productive use of a sax add to the bluesy feel of this number, a 5 star cut of some character.

“Showdown” is again mid-tempo but this one is much more R&B slanted. The group here, Simon Barbee & the Barbabes (what a great name) warble away in fine style and really sound to be enjoying themselves in the studio. The “Fife Piper” style flute break only adds to the atmosphere on this gem.

Heading uptempo again with O. C. Tolbert's “Love Bandit”. Another track that didn't originally escape from the tape vaults, though for the life of me I can't think why. From 74 we drift back to 72 with the Tokays taking on “A State of Mind”, a story song with great lyrics. The group's vocal performance stands comparison with the song's quality. Again, it makes you wonder just why this failed to make it onto vinyl in the 70's.

“The Dreamer” features a classy rhythm track over which Felicia Johnson adds her powerful vocals. A supper club ballad outing that I can see having captivated the audience in the Driftwood or Phelps Lounge back in the day. Rita DuShay is another premium grade female singer and she tackles a song done in 1966 for Motown by Barbara McNair. Barbara was mainly a night club singer (+ actor) and Rita's take of “All I Need” also has that supper club feel. “My Sweet Baby” is 100% backing track and I much prefer the released version. As is, I find it somewhat lacking.

6 (Marriage Is Only) A State Of Mind - The Tokays

8 All I Need (Steal Away Tonight) - Rita DuShay 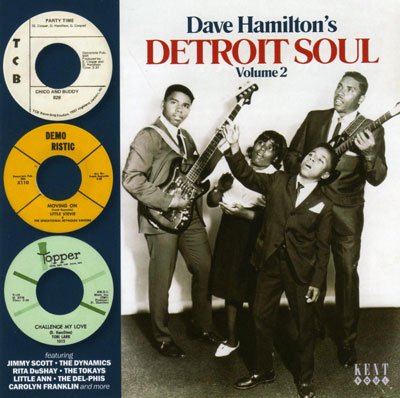 Back once again to the ladies; Tobi Lark's Topper outing “Challenge My Love” is one you surely don't need my views on. Another returnee as O C Tolbert takes on “All I Want Is You”, which again is a well known number. Here we get the longer & later (1972) rap version. For me, whilst the 1967 released take has that 60's Detroit charm, this version from OC has much more guts to it. One for lovers of REAALLL soul. Yet more eminent vocal work is displayed on Presberry's majestic deep soul opus “Somebody Is Wrong”. Who was Presberry; maybe Buddy Lamp, maybe a Temptation, nobody knows ! It's back to doo-wop days on the Del-phis “It Takes Two”. One I'm sure that RobbK would love, especially with it's Motown links. More soul royalty pops up next; Carolyn Franklin. A very sparse demo recording by Aretha's sister helps demonstrate the vocal beauty she possessed. I would have loved them to have completed a full recording of this one.

Dave Hamilton's illustrious guitar work opens up Anxiety's “Love Me Or Leave Me”. We then get a group vocal offering of the highest order on this worthy ballad. Their performance leans towards the sweet soul side of things but that's no criticism. I do wonder why this 1980 recording (made at GM studios) didn't get to lead the group towards major success. Perhaps the track was never fully finished as it has a 'live feel' to it that maybe was to be refined in final mixing. A cut of high value that lasts over three and a half minutes. Elayne Starr was better known as a songwriter but on this display (“Must Have Had Company”) she had the chops to make it in her own right as a singer. Ady thinks that the Morning After had been influenced by the Honey Cone's Hot Wax work. However they were not to follow their triumphant counterparts into the charts, or even onto record shop shelves.

16 Must Have Had Company - Elayne Starr

17 Mister Fireman - The Morning After

Next up; the Dynamics. This group enjoyed a long and sometimes commercially successful career path. We catch them here (1984) towards the end of their recording life, though the group is still in existence today. “Surely” allows them to demonstrate the many studio skills they had picked up down the years, the result being yet another classy cut. Little Stevie's “Moving On” is an uptempo gospel item of value that should even appeal to those that usually avoid religious outings. An uptempo late 60's blues number comes next and has that timeless feel of many blues recordings. A 2nd gospel offering from The Prophet & his disciples follows. This one deals with the issue of drugs and it speeds along like an express train.

The reward of having the final cut on this release is awarded to Jimmy Scott and this guy can 'sang'. Though it dates from 1984 it has that classic throwback soul sound evidenced on many 'golden era' recordings. I can just imagine Jimmy, up on stage at the 20 Grand, singing this direct to a beautiful woman he had picked out in the crowded club. I'm sure he would have brought the house down had this scenario played out in the real world.

21 You Fool, You Fool - The Prophet & His Disciples

All in all then, this is a release of many highs and a few lows (depending on your particular taste). Some cuts must surely have been included just to keep the completists happy. But that said, there are more than enough top quality outings on display here to ensure the CD has distinction in abundance. Play it through a few times and many tracks on here will 'sink in' and have you hitting the 'repeat button' time & time again.