Leola Jiles of the Apollas R I P

More sad news for the soul world. Leola Jiles has passed away, she sang with the group throughout and also had a notable solo career. The photo is of her, Billie Barnum on the right and Ella Jamerson on the left just before appearing on stage at the Cleethorpes Weekender in 2007. My Ace colleague Alec Palao got to know her very well when researching his Apollas CD on Kent and they stayed close...

"Leola Jiles, the soulful lead heard on the Northern Soul classics ‘Mr Creator’ and ‘Pretty Red Balloons,’ and one of the most distinctive voices in San Francisco R&B, gospel and jazz, died from complications from a stroke last Thursday.

They say deaths come in threes, and this past week has certainly lived up to that ominous maxim. For me personally, it included the passing of a respected musical acquaintance, a long-lived family member, and tragically and unexpectedly, one of my favourite people. I have known Leola Jiles for the best part of ten years, and it’s going to be hard imagining things without her. The loss of Leola to her friends and family is matched equally by the loss to the music world of one of the Bay Area’s most cherished performers, one of soul and jazz’s finest vocal stylists, and one hell of a classy lady to boot.

Leola Jiles was born in Ferriday, Louisiana in 1941, moving to the San Francisco Bay Area at the age of nine, settling with her family in Pittsburg, the delta town where Leola would live her whole life, and remain well-known and well-loved in the community. Encouraged to sing by her parents in church and high school, Leola’s powerful voice soon got her noticed by legendary gospel musician and advocate, Faidest Wagoner. Married to Robert Jiles and working as a secretary, Leola’s first record for the Orchestra label in 1962 was organized by Wagoner and featured two of her songs. Local airplay caught the ears of San Francisco-based gospel quartet the Apollos, who were looking for a replacement singer, and immediately hired Leola.

With their tailored exuberance, the Apollos had graduated to the white nightclub circuit where gospel now sat alongside jazz and folk as a popular form of entertainment. From 1962 to 1965, the quartet – Leola, Ella Jamerson, Joann Forks and Ronnie Brown - toured the nation, appearing at high-end niteries, jazz festivals and making frequent television appearances. They also cut two excellent secular singles for Leiber & Stoller’s Tiger imprint as The Lovejoys. In all these activities, Leola was invariably front and centre, as she sank her church-sharpened teeth into whatever material the group decided to tackle. At first that led to some friction with the other members, particularly Joann Forks, but it was clear Leola’s tremendous vocal prowess could not be denied. The young woman could handle a tender showtune ballad or tear into a belter straight from the pulpit with equal aplomb, and her striking good looks – she had once considered working as a model – also brought Leola a lot of attention.

But Ms Jiles was a team player: when Brown left in mid 1965 and the Apollos became girl-group the Apollas, it was Leola and Ella who became the nexus of the group. Joann also left, replaced by Dorothy Ramsey, and this was the line-up that was signed to the Warner Brothers R&B subsidiary Loma in the summer of 1965. A&R honcho Dick Glasser had recognized the many qualities of the trio, and especially Leola’s lead. As supervisor on all the Apollas’ recordings for Loma, and later Warner Brothers proper, Glasser made sure the act always had strong material, sympathetic charts from the likes of Gene Page and HB Barnum, and a production style that brought out the best of their vocal talents. The string of exceptional singles that resulted speak for themselves – ‘You're Absolutely Right,’ ‘Just Can’t Get Enough Of You,’ ‘Sorry Mama,’ ‘Jive Cat,’ and of course two discs that have resonated in UK clubs for decades: ‘Pretty Red Balloons’ and ‘Mr Creator.’ On all of these, Leola nails it time and again, bringing an equal amount of interpretative professionalism and joyous exuberance that literally jumps out of the grooves.

Despite the singles’ consistent quality, the Apollas were unable to make much headway in the charts, but for much of the next six to seven years, they were constantly working, becoming a much sought-after act in several different environments. Whether it be opening for the Monkees on their first concert tour, playing Bay Area teen clubs with the embryonic Sly & The Family Stone as their accompanists, or entertaining the troops both home and abroad, the Apollas were a dependable, professional group with a finely-honed act of contemporary pop and R&B that always left room for a little gospel. They were particularly popular in Australia, New Zealand and the US outpost of Guam, and toured these regions on several occasions.

Billie Barnum replaced Dorothy for a year, until Joann returned to the fold in 1968; Forks’ spot was subsequently filled by Blondell Breed. This latter line-up made two records for Bell with Dick Glasser in 1971 under the name Love Salvation, after which the Apollas decided to call it a day. Leola then cut her third solo single for A&M, the now highly-regarded soul of ‘To Make A Long Story Short’ (during the Warner Brothers period, she had recorded several sides under her own name, including the single ‘Keep It Coming’ and a tremendous uptown ballad, ‘I’ve Got So Used To Loving You,’ that remained unissued at the time). A few bare months after it had come out, she looked like she was finally going to get the break she deserved, when lead vocalist Jean Terrell left the Supremes and Leola was optioned for her slot. But manager Glasser would not allow her to do so unless he got to produce, which killed the deal and left Leola temporarily heartbroken.

After this missed opportunity and a subsequent automobile accident, Leola forewent her professional singing career and enrolled at UC Berkeley to study drama. She starred as Mary Magdalene in a major production of “Jesus Christ Superstar”, followed by a stint with Sammy Cahn’s “Words & Music,” that brought her to London in the 1980s. But Leola never gave up singing. While at UC Berkeley, she became the featured vocalist with the university jazz band, and toured Europe with them, to great acclaim, as well as working with personages as prestigious as Dizzy Gillespie and Placido Domingo.

Remaining in the Bay Area, Leola then developed a cabaret act that became exceptionally popular, winning awards and plaudits left and right, and leading to engagements all over the United States with her trio. She kept that up right until about the time I got to know her. There was also a fondly-remembered Apollas reunion at Cleethorpes in 2007, organized by our own Mr Croasdell. Leola even gained a little local notoriety back in 1979 when her ebullient gospel-inflected treatment of the “Stars And Stripes,” sung at the opening of a San Francisco Giants baseball game at Candlestick Park, offended a handful of killjoys, who somehow persuaded the team to “fire” Leola. The outpouring of fan and press support saw her invited back to sing three more times, on her own terms.

That sounds just like the Leola I got to know and love, a vivacious and kind-hearted, thoughtful lady, who could be tough and feisty, but only when she needed to be. She was also one of the funniest people I have had the pleasure to be around. I already knew she had a hell of an instrument; when I had access to the Warner Brothers tape library some years ago, the first reels I made a bee-line for were those of the Apollas, and sifting through those remarkable performances – along with Leola’s playful between-takes chatter – gave me instant resolve to give the group the anthology they deserved. Leola and I were laughing from our very first phone conversation, and I remember when I first pulled up to her home in Pittsburg, the same one she had bought with her late husband Robert back in the early 60s, the first black couple on the street – she was waiting on the porch with an amazing smile, and an infectious laugh not far behind. I’d sent a CD of the Apollas tracks ahead of time, and her first words to me in person were, “that b**** can sing!”

Assembling the Apollas compilation was a complete treat. I was more than happy to ferry Leola around, whether to the studio so she could watch me mixing the old tracks, or over to San Francisco to visit Ella and spend hours reminiscing over the exploits of the group (the pair of them together truly had me in stitches). Every journey was a laugh riot. Whenever we went to her favourite local restaurant, it was a cheap date, as Leola was so beloved in Pittsburg, her meal was invariably comped.

After the CD came out, we stayed in regular contact, with frequent visits, and she would astonish my wife Cindy and I with her surprise appearances at our Christmas parties (where of course she held court with her typical style and grace). Leola had told me of her health problems in the past, dealing with bouts of cancer on not one, but two occasions, and so when earlier this year she called to ask if I could take her to and from a couple of appointments for eye surgery, I imagined that the same inner strengths that had beaten the cancers would prevail again. Some unforeseen complications arose that obviously scared her, but her sudden passing last week was truly a shock. I really had believed that her indomitable spirit would rise to lick these latest problems.

Leola always liked to refer to me as her “producer,” and after a few years of gently tip-toeing around the subject of doing some recording with her (“you know you're gonna have to pay me!” she would always tease), I had persuaded her to contribute vocals to a Stax-type arrangement I had put together, very much with her gospel “growl” in mind. On the drive to the hospital, she sang along with the demo, and expressed enthusiasm for the task, although I could tell it was going to take a considerable degree of strength on her part. Sadly, that’s not going to happen now. If I had to choose one recording to remember this amazing lady by, it would probably be the late period Warners single ‘Who Would Want Me Now’ – for the incredible, heart-wrenching way Leola not only brought church to a pop song, but the playful asides and audible twinkle in the eye that were so much her personality. She’s belting it out upstairs right now, that’s for sure." 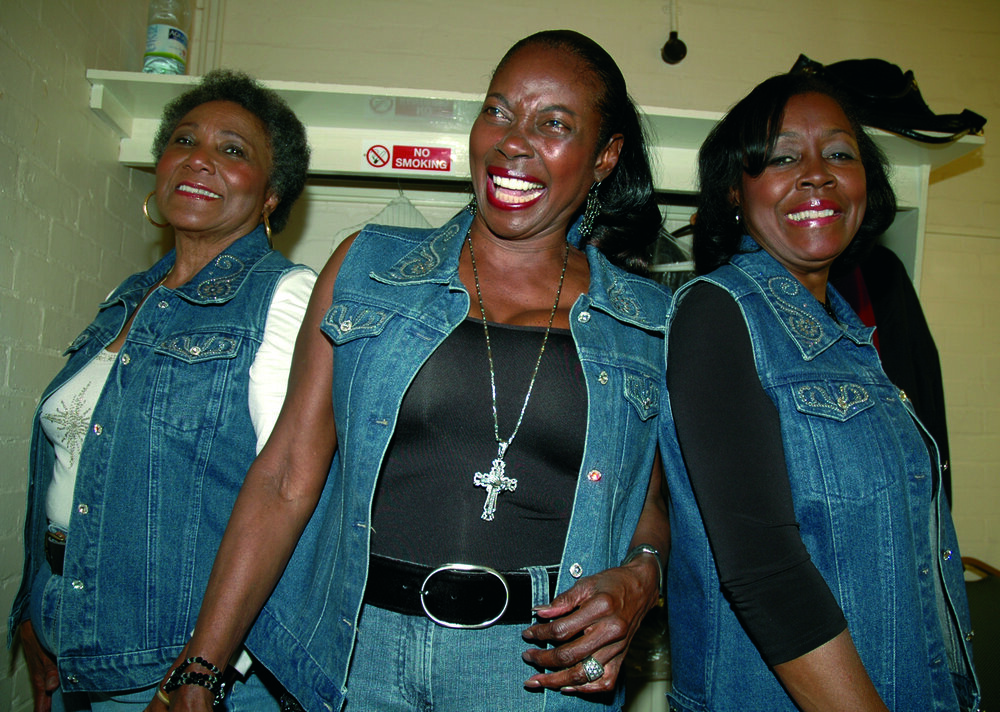