Both tracks on 7" vinyl for the first time ever.

It was around 1999 and a stack of Del-Val and related studio reels lay in Joe Stevenson’s basement gathering dust and at the same time slowly deteriorating with the possibility of being lost forever. Looking back now I am so glad someone had the foresight to transfer them onto DAT tapes before they were damaged beyond all hope. Some of the tracks were then used for a “Best of Del-Val” CD release around 2000 by the guys at Philly Archives. This was a blessing in disguise as a few years later all the masters were lost to a huge flood in Joe’s basement destroying them beyond any repair.

I was lucky enough to receive a cut of “That’s Not Half Bad” just before or around the time of the impending release of the CD and has remained in my play box ever since. For me, the track has always been a far superior version of the Gene Woodbury release and after shaking hands on the previous Eddie Holman release, I jumped at the chance to bring this track to its first and only 45 release. After being handed a few options for a flip side I was keen to use “Stop Before You Lose Me" and after a session of playing records with Dean Anderson (well-known collector, DJ and Radio Host) and he confirmed I made a good choice.

Philly Soul has always been close to my heart and the sound that has always been my favourite. For me, these tracks showcase the best of 60s Philly Northern Soul. This may feel like a vanity project for me and maybe it is, but sometimes your heart over rules your head and in this particular instance, I am happy with that. 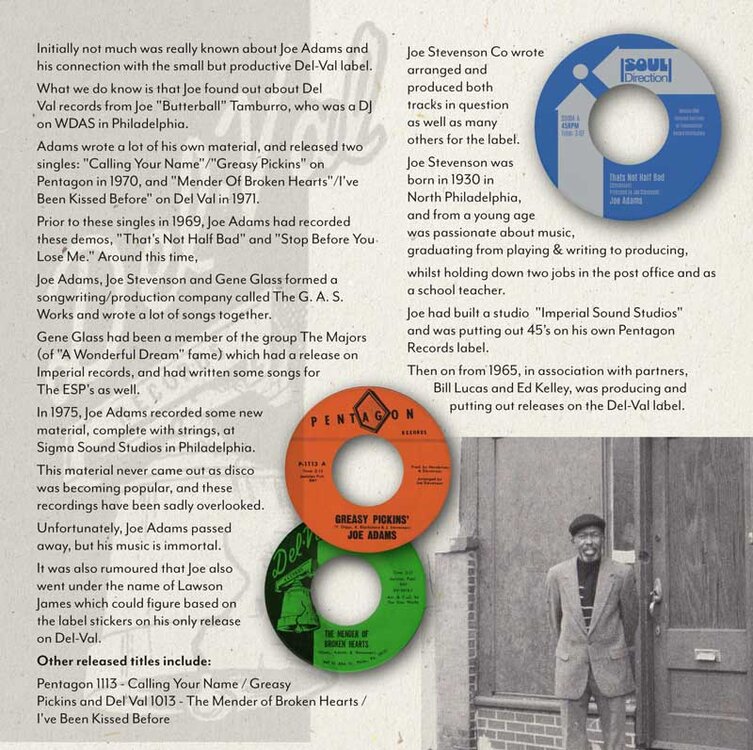 Initially not much was really known about Joe Adams and his connection with the small but productive Del-Val label.

What we do know is that Joe found out about Del Val records from Joe "Butterball" Tamburro, who was a DJ on WDAS in Philadelphia.

Adams wrote a lot of his own material, and released two singles: "Calling Your Name"/"Greasy Pickins" on Pentagon in 1970, and "Mender Of Broken Hearts"/l've Been Kissed Before" on Del Val in 1971.

Prior to these singles in 1969, Joe Adams had recorded these demos, "That's Not Half Bad" and "Stop Before You­Lose'Me." Around this time,

Joe Adams, Joe Stevenson and Gene Glass formed a songwriting/production company called The G. A. S. Works and wrote a lot of songs together.

Gene Glass had been a member of the group The Majors (of "A Wonderful Dream" fame) which had a release on Imperial records, and had written some songs for The ESP's as well. 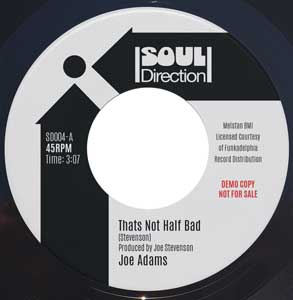 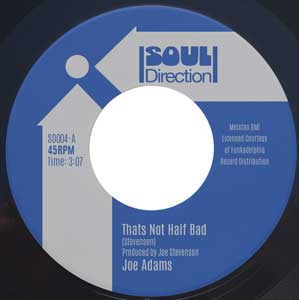 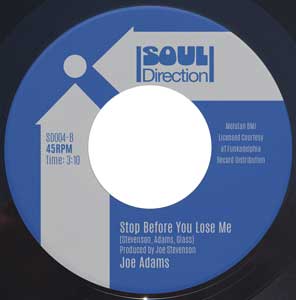 Been told should be available for sales later this week via