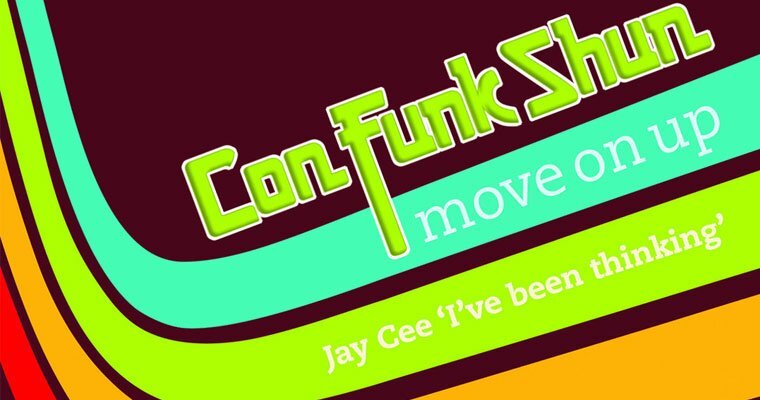 Up for pre-release orders today

Label Information and audio follows below

CON FUNK SHUN ‘MOVE ON UP’

The A side is exclusively licenced from Con Funk Shun, a previously unreleased recording. (The only other release was an album length version on Con Funk Shuns’ 2015 ‘More than love’ cd).

Con Funk Shun signed to Mercury Records in 1976 and almost instantly became one of the most successful and prolific North American Soul n Funk artists of that generation. Today their US hits also feature in charts worldwide via countless rap/hip-hop samples drawing in a whole new generation. With sellout live performances (featuring original members, co founder Michael Cooper, Felton Pilate and Rev. Karl Fuller) and recent recordings including the highly acclaimed ‘More than love’ cd release, their popularity continues today. A 32 track greatest hits compilation, ‘Con Funk Shun - Con-funkshunizeya (The Mercury Anthology)’ was released in 2020. Con Funk Shun's music is also soundtracks of films including ‘Gone In 60 Seconds’, ‘Next Friday’, and ‘American Pimp’, which was featured at the 1999 Sundance Film Festival.

Against that background, Andy Bellwood of Last Bastion Records explains “with 11 chart albums (one Platinum, four Gold) and 20 hit singles (eight top 10 RnB chart, one No.1) in the US, it’s still hard for me to comprehend that the 3rd release on Last Bastion Records is from these soul & funk legends. David & Goliath comes to mind, after all it’s a small indie label which only came into existence last year and operates out of a converted donkey stable in the North Yorkshire Moors National Park!”

‘Move on Up' was recorded in 2014 at The Soundform studios, California and it’s already an in demand, pre release, requested sound in dj sets and radio shows via an acetate & test presses. It’s the sound of New Orleans and the Louisiana swamps blending that Zyedeco beat with an accordion/squeeze box and Con Funk Shuns’ formidable horn section. The result; a unique and infectious arrangement - a dance groove which doesn't diminish the socially conscious lyrics which would surely have Curtis smiling. …

”this is music that could get the most reticent of dancers itching to get out on the floor – and that is pure magic…” Ian Cantley (MorethanWar.com) On the B side, it’s Nu-Soul with 'I've been thinking' (lightly sampling a Northern Soul/Popcorn classic) and first heard to rave reviews as a rough mix via an acetate on the dj decks of Yorks' Waterfront Blues and Soul Club sessions in 2016 where Jay was one of the resident djs. It’s also now the soundtrack to a short film produced by Connor Blackburn at Blackburn Films.

“Con Funk Shun sprinkle a helping of Cajun spice across their tasty re-working of 'Move on Up'. York based Jay Cee showcases his Nu-Soul talent on 'I've Been Thinking', his debut release. You shouldn't need to, err, 'think it over twice to define the sample. High quality, on both contrastingly different, sides, another Last Bastion winner.”

“Con Funk Shuns 'Move on Up' is the perfect example of the under ground soul scenes’ acceptance of an alternative musical formula. A hint of Caging, a perfect vocal delivery and a musical amalgamation that is set to be a new classic.”

“While looking to cover a song from the 70's, we could think of nothing better then to call on master Curtis Mayfield’s song of awareness. With our love of Zydeco, New Orleans and Louisiana, we wanted to shake things up a bit with the old squeezebox.”

“WOWZER! BRILLIANT Supercharged, pumped up funky driving punchy attitude dance floor detonator and sure to shake the dancefloors and will most definitely be in my DJ box.”

“Con Funk Shuns’ ‘Move on up‘ a great, must have, upbeat dancer and a fabulous alternative to one of the all time soul classics.”