The current forum topic called Stax Dancers reminded me that had once 'ocr' scanned the sleeve notes of my copy of this old 70s lp comp titles Stax Northern Disco Sounds. While the cover has to be one of the worse northern comp covers around, the actual sleeve notes written back then by @Ian Dewhirst may now make interesting reading as they do provide a snapshot in time of attitudes and such and as have not seen them in easy to read text format thought they may be worth a pass on...

I did buy this lp back when it was released in 1975 and it was quite a memorable purchase. Memorable as it turned out to be one of the lps that did open/expand my ears/taste quite a bit.  At the time of purchase I was just a young 14 year scally type who thought he knew everything,  when I got my hands on this lp some of the tracks didn't really hit it off with me on first play, stuff like Little Sonny, Rance Allen etc was quite far out (in its literal meaning) to kids like me at the time. But slowly over time with repeat plays those tracks slowly drew me in deeper and deeper.

Anyway what does make the sleeve notes interesting reading is not so much the track reviews but rather the opening and closing paragraphs written by Ian d. This was the 'soul' narrative that was being said and pushed out at the time and being taken in by kids like myself. Though given the title of the comp and the cover picture the 'right on-ees' in the notes does make you smile now. No matter, here's the notes in easy to read text format... 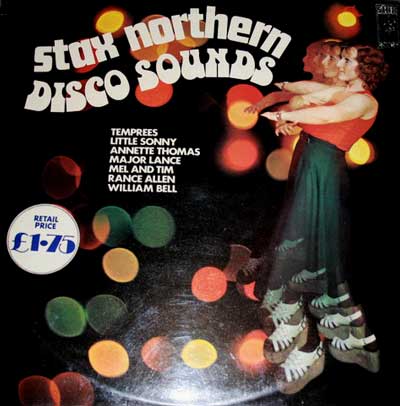 At a time when the words 'Northern Soul' have become a rather hackneyed cliche of describing basic, brash, fast, dance music, it is a refreshing change to suddenly find an L.P. dedicated to the real thing! As various new records run up the charts under the guise of 'Northern Soul' one wonders exactly how long it will be before the record buying public will realise that they have been brainwashed into buying sub-standard product. For the people who look no further than the top thirty for their tastes in fast-beat soul, this album is not for you. For the people who are willing to discover authentic Soul with that Northern beat and for the legion of fans of Northern music who are already aware of the treasures around  this is the real McCoy!

Having said that, what better record to kick off with than the immaculate 'At Last'. Right from the first two beats the Temprees superb harmonies compliment the brisk backing and give the classic song a brilliant re-working. This record established itself as one of the biggest records in the North and quite rightly so! Possibly the most commercially successful record on this album is 'Happy'. Of course the title epitomises what the record is all about and William Bell's bouncy vocals belt along and carry lyrics which make everybody wonder why they've ever worried. A record which should be played everytime you're feeling low! Instrumental time and here we go with Little Sonny's re-working of Ramsey Lewis 'Wade in the Water'. A Northern favourite at the best of times, and Little Sonny's version adds a new dimension to this classic dancer.

The normally deep Soul and Funky Johnnie Taylor hits a solid Northern groove with Wylie and Hestors 'Friday Night'. Johnnie rips his soul out on this gutsy song .... and what a beat! A real 100% true Northern dancer which always packs the dance floors. The Gospel Veteran, Rance Allen turns up with a Northern goody and a high wailing rendition of 'There's Gonna be a Showdown'. Once again another gutsy item which belts along with Rances' voice hitting almost impossible notes. Of course Rances' roots show through this one right from the Gospel harmonies to the clanking piano in the background but this shows yet another branch of Northern Soul which the media continues to ignore.

Hitting back with the happy Northern sounds are Mel and Tim with Philip Mitchell's 'Free for All'. A fabulous intro immediately starts the record and then Mel and Tims sweet-soul voices carry the joyful singalong lyrics. As with the Temprees record, once again,.a brilliant arrangement and a credit to all involved. Annette Thomas, who still remains relatively unknown delivers a modern but unmistakably Northern sound with 'You need a friend like mine' This is one which gathered many plays. when first issued and is just the sort of record which will probably spring up in a year or two, and have people•kicking themselves for not getting to it first!

The Staple Singers although not associated with Northern Soul somehow hit the groove with 'Oh la de da'. Yet again another happy beater (and why not) with Mavis, Pop and Co. yelling the title backed by a frenetic beat. Not a record for devout intellectuals but who the hell actually thinks on the dance floor! A record to shed inhibitions to. Little Milton leaves the monologues behind and comes up with a relatively little known Northern dancer entitled 'Bet you I Win'. As always that typical Stax sound in evidence and Little Milton gets in perfect voice for this strutting item.

Old Northern favorite Major Lance adds to his list of classics with 'That's the Story of my Life'. Perhaps not as well known as his other items but a completely captivating slab of Soul with the Major's smoothly shrill voice fighting against a perfect dance beat. As with the other records mentioned this side must be in line for some future plays.

Here we go again with stalwart Jimmy Hughes who brings us perhaps his best known dancer, 'Chains of Love'. This has always been a much loved side in the North and it fully deserves its unbending popularity from those who dig real Soul. And now what a classic, we have Jones and Bloomburg's invigorating version of the 'Right Track'. The song, which has now joined the ranks as one of the handful of true Northern Soul anthems is beautifully handled by J. and B. with that ever important beat very much in evidence. Finally Margie Joseph. Once again, not a Northern heroine but Margie teams up with 'Medicine Bend' and wraps her delicious vocals around the lyrics and creates a nice danceable little item.

And so there we are! Perhaps not a collection of sides which are all well known or even commercially viable but I do promise you that every cut is SOUL!, and that is a word which several parties do not seem bothered about. Look at the charts today. How many Soul records are there in the top thirty? 4? 6? 8?. But listen again are they not simply pop records sung by black people? When was the last time you saw a black singer really belting his heart out? Listen to the Staple Singers, Rance Allen and Johnnie Taylor tracks! When was the last time you heard a Soul record in the charts without computerised string sections and faultless harmonies? Listen to the Jimmy Hughes, Major Lance, William Bell and Mel and Tim tracks, and you'll realise what is missing in today's music! Hence for those of you who are already acquainted with these songs you'll already know what a gas this album is. For those of you who have just turned on to these records Congratulations you've got SOUL!

1–Annette May Thomas -You Need A Friend Like Mine

3–Little Milton - Bet You I Win

4–Major Lance - That's The Story Of My Life 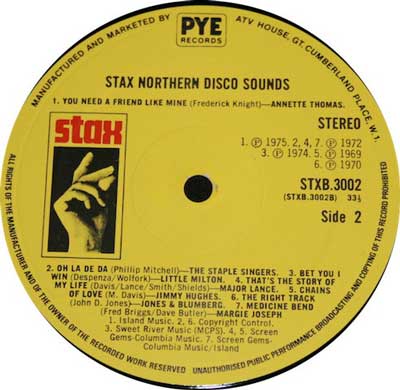