A Southgate Soul Girl whose star shone bright before we lost it .

This week sees the 10th anniversary of the death of  Amy Winehouse. I thought she deserved a personal tribute on these pages. Whilst she won’t be everyone’s taste it would be hard not to ignore her impact and achievements .

Amy’s roots were forged in the migration of her great great Grandfather  from Minsk , Belarus to Londons East End in the 1890’s . By the time Amy was born in 1983 the family had settled , with many other  East End Jewish families in the North London suburb of Southgate.  Father Mitch was a Black Cab driver despite an early divorce he became an influential figure in her later career.Amy’s  musical legacy was forged by a number of uncles who were Jazz musicians but more so by her paternal Grandmother Cynthia who  the young Amy adored. 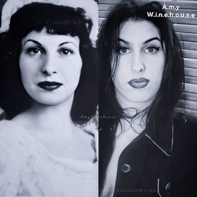 Cynthia, occasional Jazz singer , dated legendary club owner Ronnie Scott . Legend has it Amy  grew up hearing her Dad and Cynthia deliver Frank Sinatra Jazz standards in the house, but she has also cited her love of Salt and Pepper and The Beastie Boys. This fusion of both retro classics and contemporary sounds was to be her hallmark and path to success. Cynthia provided far more than musical influence , she was flamboyant , and something of a mystic absorbed by Tarot cards and the fragility  of fate and destiny .

By the age of 12 Amy had bought her own guitar and was writing songs.  Her influences  were never merely cited retrospectively to appear hip, evidenced by details of an early ‘Chill Out ‘ cassette tape. It includes the often cited Ella Fitzgerald , Frank Sinatra , Carol King   but also Ray Charles  Curtis Mayfield  Edwin Star . She was encouraged by Cynthia to attend drama schools . At 17  she became the featured female vocalist with the National Youth Jazz Orchestra and by the age of 19 she has signed to Simon Fullers 19 Management, and began a long working relationship with Producer Salaam Remi. The buzz about Amy triggered keen interest from a number of major labels , but Island Records A and R man Darcus Beese acting on a tip off sealed a deal that was to secure the release of her debut album Frank in 2003. 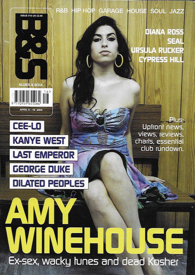 Blues and Soul magazine feature following the release of Frank.

Much of it had been written whilst Amy was still a teenager , it provided a credible debut of Neo Soul over a mix of drum and base and mellow Jazz. Whilst it won an Ivor Novello award , was shortlisted for a Mercury  prize and reached platinum sales it was only a shade of what was to come. Amy performed at Glastonbury , V Festival and Montreal Jazz festival  to promote an album she was often self critical of .

Co producer on her debut album had been Salaam Remi whose previous work had included The Fugees, Lisa “Left Eye” Lopes  and Ms Dynamite.This collaboration continued for the follow up Back to Black album which saw her travel to New York and Miami to work with British born legendary director Mark Ronson . Amy developed a close working relationship with both men , and also the Dapp Kings who were brought  in work on the album which provided a shift away from Jazz towards sixties soul and girl groups , with additional elements of Neo Soul, modern blues and ska .Both men have admitted that Amy was not the easiest person to work with , and it took some coaxing and a high degree of trust for her to accept changes in production.

They produced  album made of ten  songs that average three minutes with 5 of the nine songs are under 3 mins. Amy poured out her sorrow and frustration in a style that was both sultry and agonising at the same time. The songs were marked by references to soul idols (Ray Charles and Donny Hathaway) sexual frustration  and the contradictory emotions in modern relationships . It drew on Motown , Neo Soul and   Billie Holiday’s legacy. Whilst Amy’s voice was never  ever going to compete with Aretha or Glady’s it was by any standards a Soulful album.  Completed  within five months it was destined to become a modern classic  It barely had a weak track and was to provide  5 singles within a year . Musically Rehab was ironically the most commercial and was on everybody’s lips and radios world wide, a cruel irony given that Amy was never more in need of rehab at the time . It reached the UK and US top ten in October 2006.  It was followed by You Know Im No Good ,  Back to Black, Tears Dry on their own , and prophetically Love is a Losing Game. A cynical mind might feel Island were milking a talent that wasn’t destined to shine for long.By the end of 2011 it had sold 3.5 million copies in the UK and 20 million worldwide and award ceremonies  couldn’t get enough of Amy and the Back to Black team. The Brits’s , Mercury , Rolling Stone Magazine , and 5 Grammys’ all took a chance on giving her a an acceptance speech.

Within the next 2 years a catalyst  of events would combine to result in a Amy’s drift towards self destruction. There had been rumours of mood swings and depression as a child and school exclusions which were denied. There is a stark warning in a statement from Amy to camera in the posthumous 2015 film Amy about her inability to handle fame and attention.Her early manager and friend Nicky Shymansky  later disclosed  to Daily Telegraph journalistJessamy  Calkin :

‘It was around February 2005, in the space of a week, everything changed. I called her, and she sounded different. I remember saying to my brother, “Something weird is going on. Amy doesn’t sound like Amy.”‘That was the week she met Blake Fielder-Civil. She  changed overnight."

He reportedly  admitted to introducing her to Class A Drugs , then broke off their relationship to return to an existing  girlfriend. Whilst Amy never hid her  frequent use - or dependency of Canabis and Alcohol she was reported as chanting  ‘Class A drugs are for mugs’ at the beginning of her shows prior to meeting Fielder - Civil . Amy’s family and fans have pointed to the death of her beloved grandmother Cynthia in May 2006 as a trigger for her  emotional decline.Amy Winehouse and Fielder-Civil married secretly in Florida in May 2007

Their relationship  was marked by co dependency , binge sessions , violent break ups and emotional make ups between the two. They were divorced within two years, but by this time Amy appeared in full decline . Ive chosen not to detail the sad gory details of her personal decline which were captured almost gleefully by a tabloid press. She died alone on 23rd July 2011 aged 27  , and the inquest reported blood alcohol levels as  .416 mg of alcohol per 100 ml of blood with readings of over 400 likely to lead to lead to a coma and death. 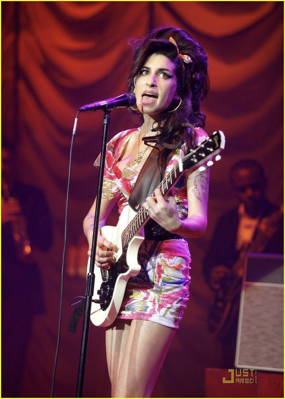 Ahead of her death there were hopes of her delivering a song for a new James Bond song ,and also rumours of a Ska album.Amy Winehouse was one of a long line of white  UK female singers who have embraced Soul music and  delivered it with passion, respect and integrity.She  belongs on that list along with Dusty , Lisa Stansfield , Joss Stone. There is no doubt Amy inspired countless singers to follow her , with Adele and Duffy among them.  Emile Sande, Sam Smith and Paloma Faith are among  many who have also cited her influence.You might not have wanted her for a neighbour , your daughters best friend or your sons new girlfriend, but in a music scene dominated by X Factor clones it was hard not to admire her raw energy.Amy sealed the bond that so many performers and artists in this country have with Soul music in all its forms. Its passion  gripped her and she felt it no less than any of us who have taken to the floors of an all niter.  RIP.

The fact that the BBC have scheduled over 10 hours  of  TV and Radio programmes this week is testimony to the extent of Amy’s talent, influence and popularity . Here are a few looming .

BBC 2. 9.00 . Reclaiming Amy : A personal collection of family memories provided by her Mother and other family members.

BBC4 10:30 Amy Winehouse ; The day she came to Dingle. A documentary built around Amy’s acoustic  2006 performance filmed at a church in Dingle , County Derry .

BBC4 11:30 Classic Albums : Back to Black A  excellent  documentary examining the development of  the Back to Black album . It includes interviews with  members of the production team such as Mark Ronson and members of the Dap Tones, as well as Amy . It gets right to the heart of the chemistry between them .

12:00am In Their Own Words.: Clips of Amy’s interviews with the BBC

1.00 am Amy Winehouse at the BBC : A selection of her BBC Sessions

2:00 am Amy Winehouse Live : Highlights of her BBC concerts. 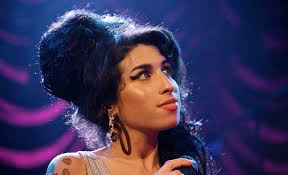