How to do Northern Soul Properly - The Book

A Handbook for the 21st Century

Have you ever thought that sometimes we take our scene a little bit too seriously?  After all this seriousness is not apparent when we go to a soul night, there has always been a large amount of piss-taking and general larking about in and around the scene.   However this hasn’t been reflected in the literature of Northern Soul - until now.  I was inspired to write “How to do Northern Soul Properly” by a book for cyclists called “The Rules” in which the many unwritten rules and traditions that apply to  life as a roadie were  collected and laid down as a set of rules.  There is a convention that dictates that the valve of a tube should always line up with the logo on the tyre, which in turn must line up with the logo on the wheel. This may sound poncey but you’ll always know where the valve is! It was while I was reading this that the connection between the soul scene and cycling occurred to me; until recently cycling was an obscure sport with no media interest, the same with the soul scene, every few years we become trendy and the media and punters start taking an interest and like cyclists we have a set of unwritten rules & conventions that you learn as you go on.  Seemingly trivial things like when to clap during a record, dancefloor etiquette, how to navigate across a flooded toilet and not get your beer towel wet, why the Chinese connection theory is bo***cks and many more snippets of useless information. The book itself has evolved into more than just a book of rules, it’s part autobiography, part fiction and all tosh. There are chapters on dance lessons, health matters, a potted history, what to wear, taking gear, what record dealers descriptions really mean, what we want from our DJs and much more.

I don’t pay much attention to individual records.  This subject is covered better than I could hope to do in many other publications. This was and is a light-hearted look at the Northern Scene through the eyes of someone (me) who has been loitering around the Northern Scene since 1972. The book is more suited to the reader who has been around for a while and seen the changes, both good and bad, that have taken place over the last 40 or so years.

You can Paypal me at
tone5446@tiscali.co.uk
or send a cheque to
37 Thornhill Rd, Surbiton, Surrey KT6 7TN

Both John Manship and Derek Mead at Soulmine Records also hold a stock of the book.

Here’s what some readers have said about HOW TO DO NORTHERN SOUL PROPERLY.

Its Tony’s comedy take on Northern Soul behaviour over many decades.  If you are a newcomer or have a loose connection to NS, it may not suit your palate, for those who have lived it since its inception it’s a real rib tickler.
KEV ROBERTS

One of the best books (On Soul) I've read.
KEITH ROBINSON

So that’s what you used to get up to.
TONY’S MUM

A must read for all real northern soul fans (nsf). Incredibly witty & spot on!
ANTHONY HANNINGTON 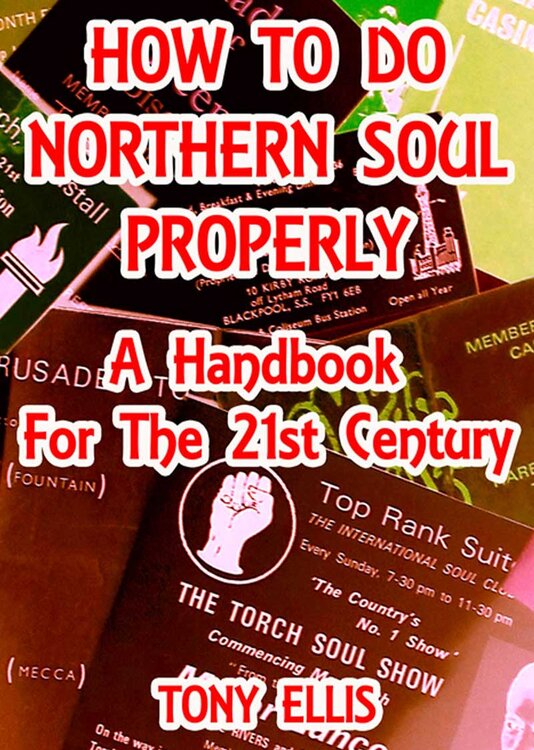