The Four Perfections - The Story by Dave Moore

the first draft of the song was written with a doomed love affair as its foundation.

A LESSON IN PERFCTION - CREATING A MUSICAL MASTERPIECE

At last year’s New Century Soul 10th Anniversary Allnighter we had the pleasure of the company of 2 Philadelphia Legends, Bunny Sigler and Ronnie Walker. I was lucky enough to spend the week with them and Martha, Bunny’s wife, as we chaperoned them from airport to rehearsals to gig etc resulting in finally seeing Bunny sing a whole Northern set.

Well folks...it’s that time of year again! When Chris Waterman gave me the thumbs up to try and entice the group for this year’s event, it meant I had finally had a chance to maybe see/hear one of my favourite 45s sung live, by the people who not only performed it but also wrote it! I’d tried unsuccessfully to convince the late great Deon Jackson to appear for his UK fans and was devastated when he passed without having been successful and as far as the group for this upcoming Anniversary event were concerned, I was like a dog with a bone. It simply had to happen! I’d had it dangled before me and set about trying to put in place on of my life’s ambitions, to see The Four Perfections perform ... LIVE!

The story of The Four Perfections - “I’ll Hold On b/w I’m Not Strong Enough” — Party Time 1001 is a tale littered with Philly musical gliterazzi and was written in the basement of the girl’s dormitory of Cheyney State College where Eddie Holman would teach Mervin Steals, his school friend, the intricacies of the piano on an old piano that was down there. It was at these covert basement piano sessions that the first draft of the song was written, with a doomed love affair as its foundation.

“The song was really created by Mervin although I helped with the words, as he had an unfortunate love affair, which our Mother disapproved of. Then his girlfriend turned out to be unfaithful and that’s where the song came from — he wasn’t strong enough to break away”. — Melvin Steals (Founder member of The Four Perfections). (1) 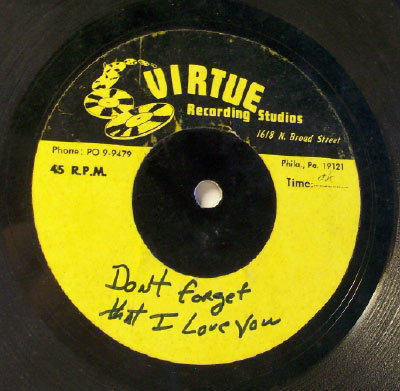 Whilst students at Cheyney State College, twin brothers Melvin and Mervin Steals were joined originally by James ‘Channey’ Turner, a budding guitarist and fellow vocalist Raymond ‘Chip’ Porter and became The MCs, a play on their initials. It was this line up that would play the talent shows around town, often in direct competition with a group with, what they considered a strange name: The Delphonics! When ‘Channey’ left the group shortly after, the trio recruited former Overbrook High School student and high tenor vocalist Barry Lessend to the line up. Barry was a friend of the previously mentioned Delphonics, had been performing with another campus based group, The High Chaparral but decided to cross deck to The MC’s. The quartet now changed their name to the one that would adorn DJ’s platters on the Northern soul scene ever since they discovered it in the early seventies. The Four Perfections.

Prior to graduation, Eddie Holman introduced the aspiring singers to a group of record producers that he’d hooked up with that were making a name for themselves at Frank Virtue’s studio on Philadelphia’s Broad Street. This of course was Randolph, Stiles and McDougall, the triumvirate soul fans would come to know as the Harthon Team. The guys recorded a demo of a Jesse James penned song for the team but it wasn’t judged strong enough for release. That wasn’t the end of the song though as The Harthon Team played the demo to another group whose version was deemed of the right quality and The Intentions — “Don’t Forget That I Love You b/w The Night Rider” — Phillips 40428 saw a release in 1967. 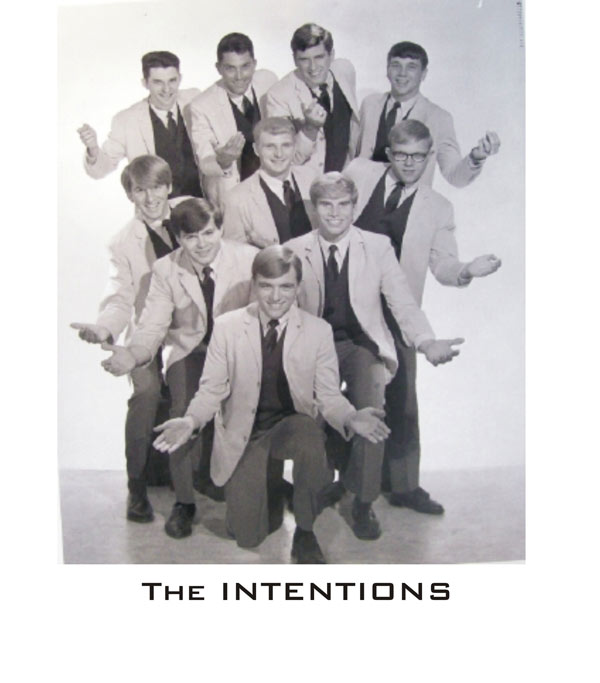 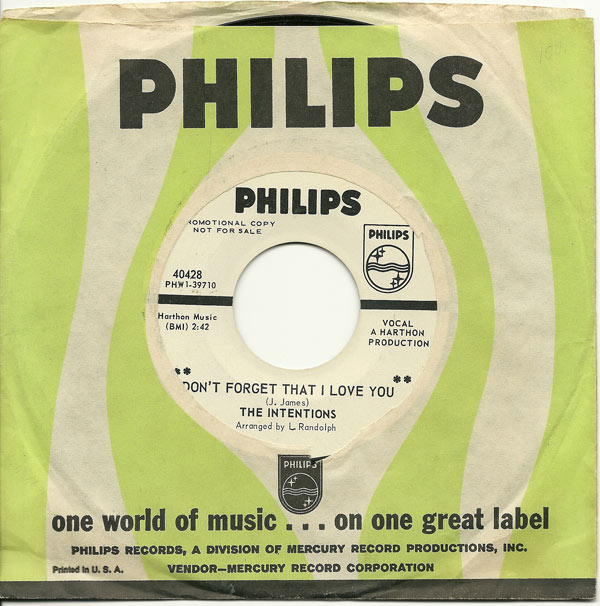 The Intentions, (from nearby Middletown, PA.) were a white, 10 piece group whose Phillips 45 was the only foray into the business they achieved, which is a bit of a shame as the 45 is as fantastic an example of sixties, mid tempo, high tenor vocal gymnastics as you’ll hear. (2) The lack of success with Harthon at Virtue’s left them undeterred however and they were introduced to Bruce Weinroth, the son of a local judge and a co owner, alongside his brother Irvine, of ShowTime Records who, at the time were preparing to launch another group of two sets of brothers: The Showstoppers. The Weinroths had the guys audition on a song they already had, “I’ll Hold On” and once Melvin offered up “I’m Not Strong Enough”, as the possible flip, it was enough to get them a deal. Studio time at Cameo Parkway’s 309 Broad St facility was booked, the talents of Joe ‘Boobie’ Thomas, the author of “I’ll Hold On” were used to arrange “I’m Not Strong Enough” and Kip Gainsboro was given the helm of the production session. (3) The famous old building that had seen the likes of Chubby Checker, The Orlons, Dee Dee Sharp and The Tymes amongst others was about to deliver up a unique, one off, double sider that would attain cult status thousands of miles from its creative birthplace. 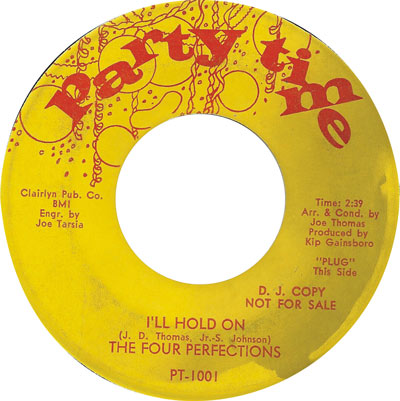 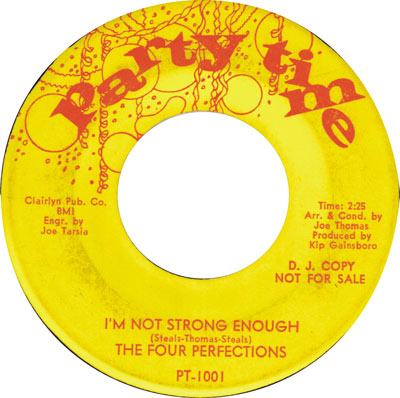 The studio band built around the famous core of future MFSB stars that day included Karl Chambers on drums, Ronnie Baker on bass and Norman Harris on guitar and under the conductor ship of Thomas and the legendary engineering skills of Jo Tarsia they laid down two tracks that enraptured soul fans of both the Northern and the sweet persuasions. (4) With Barry Lessend taking the vocal lead on the A side together they created a slice of sweet soul heaven. Almost a beat ballad, Barry’s pitch perfect, high tenor lead soars above his supporting counterparts as he relays his sadness at having his heart broken but being determined to hold on until his girl asks him back into her life. The whole performance drips the qualities that make sweet soul so enticing, perfect harmonies, a great, almost doo wop inspired lead and a laid back but metronome like track to place it all on. Not surprisingly the side became a much sought after sweet soul classic, so much so that that late great aficionado of the genre Chicagoan Bob Abrahamian and I would dissect the song note by note, with him adamant that there must have been a female voice in there somewhere. (5)

The flip of course is the side that seduced fans across the pond though. The opening salvo of the echoing tubular bell (?) paired with Baker’s subdued bass-line is instantly recognisable and once the rhythm guitar, deep baritone sax and bongos come to the party I’m afraid it’s all over, they’ve got you! Feet tapping, head nodding, you’re dance-floor bound, whether you like it or not! This side sees Melvin up front and centre on lead vocal duties and a fine job of it he does too. 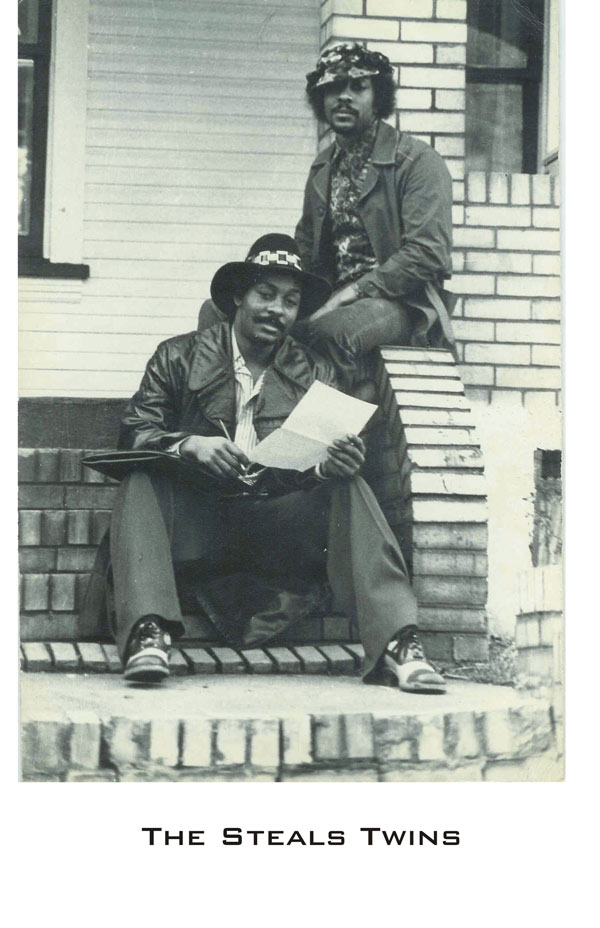 The guys, as a group unit, only ever released this one outing and there’s a story behind the whys and wherefores of that decision involving The Weinroths, The Steals Brothers, the groups break up and re-formation and the effects of graduating and needing to start work but all that’s for another day,. (and you’ll need to buy the book!). All the group members have stayed connected to the music business in some way and the Steals Brothers would go on to write songs for such luminaries as Thom Bell, Gamble and Huff, The Spinners, Ecstasy Passion and Pain, Archie Bell and The Dells, Major Harris, The Impressions, Miki Farrow and whole host of others under their pseudonyms of Mystro and Lyric. 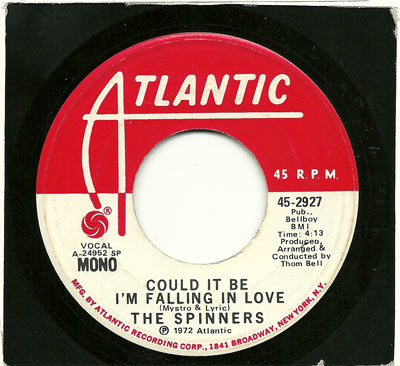 Amongst the songs the group will perform for the New Century Anniversary Allnighter will be one such song that delivered them a gold record when they furnished it to Thom Bell of Mighty Three Music. “Could It Be I’m Falling In Love” is a song written by Melvin when he was ‘courting’ his then girlfriend and now wife of 40 years Adrena. (It must have impacted on her!). The song of course was recorded by the group Thom Bell assaulted the Hot 100 with as The Spinners — “Could It Be I’m Falling In Love b/w Just You And Me Baby”— Atlantic 2927. And that is just the tip of The Steals Brothers’ musical iceberg. 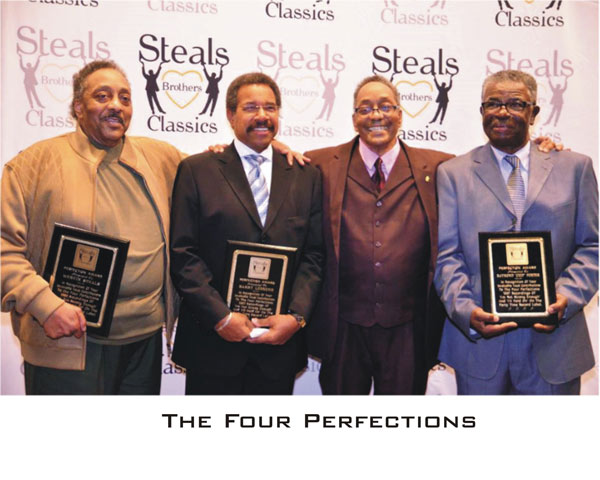 To welcome The Four Perfections to the shores of UK is fantastic. For Chris to have secured the services of Stone Foundation band is fantastic. To hear an iconic 45 sung by the group I used to wonder about when I was dancing away to it over 35 years ago, is going to be fantastic!

What better way to spend a winter’s night in Manchester, than with legends! See ya’ll there.

© Copywrite protected. Not to be reproduced in any form without the expressed permission from the author.

P.S. The full stories of The Four Perfections, The Steals Brothers, Edie Holman, The Intentions, The Showstoppers, The Weinroths, ‘Boobie Thomas’ etc is all in the upcoming book Philly Soul: It’s Roots and History which should be on the shelves in late summer hopefully.

1. Authors interview with Melvin Steals of The Four Perfections.

2. The Four Perfections weren’t aware that their demo had been used or was even in existence until The Intentions Phillips 45 was highlighted to group members.

3. Joe ‘Boobie’ Thomas would go on to become a stalwart of Curtis Mayfield’s studio musicians in Chicago.

4. Joe Tarsia would, a year later, establish Sigma Sound Studios around the corner at 212 N 12th St, where he cornered the market in Gamble and Huff productions and would later return to Cameo’s old building at 309 S Broad St to renovate it, once Gamble and Huff had bought it, creating what become known as Sigma II.

5. No female singers were used during the session but of course could have been added to the mix later. I like to think that the male, Philly, high tenor signature sound, is all there is vocally but it does sound like there may have been a female voice added later.

The Four Perfections and Stone Foundation

Tickets are now available to purchase online via 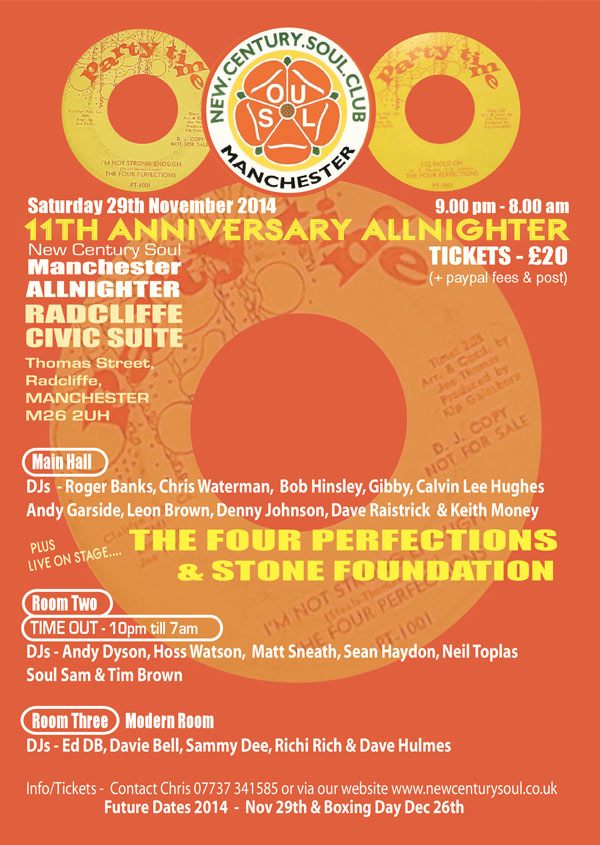