the lodestar in discovering the beauty and diversity of...

For those avid collectors of rare soul vinyl, the mail order list of SoulBowl (proprietor, John Anderson) should have a special place in their heart, because for the last 50 years it has been at the forefront of vinyl digging for those rare soul imports that we hold so deep in our hearts.

Soul Bowl is to present a connoisseurs room at this forthcoming Prestatyn weekender and has lined up some of it's previous primary customers, including Colin Curtis, Richard Searling, Soul Sam etc. to play something engaging.

To promote this room and also shed a little light on the Soul Bowl set up, I've managed to get a small introduction from John and then a few words about my experience as a collector, including finding records on the weekly list, or in person at the warehouse.

For those who have never had the fortuity to have experienced Soul Bowl's mail order business, or for those who did, but would like a reminder of what went on in those early years of the rare soul scene, I've also posted up some old sales lists. I hope you find them as interesting and amazing as I did

Mark has asked me to write a few words about my 48 years or so of selling records.my first deal came about from my time trawling shops on glasgow. There was a camera shop that had tons of 50’s/60’s uk singles they had bought as a load. I was in there one day and they saidwe got a lot more in a room behind a false wall in the basement. There were four titles in quantity–miracles on fontana/both marvelettes on fontana/eddie holland-jamie. I bought them for 3 old pence and sold them to reddinton’s records in birmingham for 6 old pence-i was on my way!

My second deal was a load of 10,000-us singles i bought blind-took out the soul and managed to offload the rest to an office supply shop in glasgow.

My third bigger deal was going to the states and i hand picked 60,000-soul singles and shipped back sea freight and when my mum and dad saw the truck turning up at our second floor council house they thought the floor would collapse with all the weight! I didn’t have these records for long,word got out and that was the start of our time in the record business proper. I’ve been on the road in the states most years for 4 or 5 months so after close to 50 years you forget a lot of the deals you made.the only year we added up the invoices was 1977 and that year we shipped in one million singles.our major problem was space in king’slynn we had 4 places in town. An old church, a barn and a huge double garage, but we were always running out of places to put the next load. The great thing about those days was we learnt as we went along and there were no price guides which really mean nothing as prices change all the time, also collectors had very little money and we would end up with piles of bounced cheques! All very different from today.

Mark has also asked me to mention a couple of record deals we made back in the day. two that come to mind are the time i went to cincinnati to buy a load of 200,000 singles. They were in the basement of a one stop that had closed down–ceiling to floor-they were mainly promo copies.the one stop would mail out a few and then through the rest in the basement from the late 50’s to ‘67. I couldn’t really see much as there was no power-so it was a gamble and we made the deal.i had them shipped but had no idea what we had until the truck’s turned up in king’s lynn. I opened the first box and inside were 50 copies of the invitations-ski-ing in the snow. We ended up with thousands of obscure mid west/west coast soul records as well as demos on major labels. I could write pages about these deals but the second one i’ll mention was in the uk. I used to swap loads with a friend of mine paul who ran stalls on bradford market.he had picked up a load from me and a few weeks later he called me up and said we’ve just got in a big load from the west coast. I went there with gary cape––it was mainly west coast labels in quantity–mirwood/pzazz/highland etc etc––they came from record merchandisers in los angeles. I just remembered that when i still lived in scotland i got the train down to bradford and went to paul’s house to look at the records in his garage––there was 50 copies of the salvadors on wise world in there–wish i had them today!!!!!

From a collectors perspective:

In the early 7ts I was already a devoted follower of Northern Soul, even at the tender age of 14yrs. The Torch allnighter was the place to go and my older brother, Ant, was a regular attendee. He had a reasonable collection of imports and gave me the go-ahead to play them when I wanted to. Becoming more interested in vinyl I would peruse a weekly list that my brother was receiving; the list was called Groove City and was basically a couple of A4 pages with about 200 records for sale, mainly Ric Tic, Motown and various Detroit labels on offer. Trying to remember what was on those lists 43 yrs ago is a real struggle, but i do remember that a regular record that you could buy, was Sam Ward 'sister lee' Groove City for 75p. This it turned out was the prototype soul list to SoulBowl.

Eventually, i got signed up to the SoulBowl list in my own name and became a regular buyer, an addiction to this day that ive never been able to restrain. The mail order business was essentially run by husband and wife team, John and Marissa Anderson, with support from a Northern Soul dj, Poke.

One of the real attractions of the list was the Pound Special page. Since there wasn't a great deal of money in a young person's pocket at that time, being able to buy a decent original Northern 45 for a Quid was just what us budding collectors needed.

Most weeks, another excellent section of the list contained a record that had been hitherto 'big' at the major allnighters, which had now been discovered in some quantity and was now for sale at a fraction of the price it had been previously. This would usually be the talking point for many of the collectors in the Wigan record bar, or at our local 'soul pub' the Antelope. See if you can spot any of these records on the sample lists at the end of this article.

Obviously, most of the records on the weekly list were rarities and therefore you needed to phone as early as possible to reserve. For most of us, that meant running down to the phone box at the end of the street and dialing the ten digit number, usually getting the engaged tone for at least the first twenty tries. When you finally got through, you heard the dulcet, Scottish inaugural greeting, 'SoulBowl' Pushing your coins into the phone box, hoping and praying that your most wanted records were still available, you were able to put in your order. Being able to secure any records from your wish list would set the tone for that day and sometimes for days after. I remember one day in particular, when i was able to reserve five top notch sounds and i ran back up the street, punching the air like I'd just scored in the cup final.

As the years passed and my interest in the the obscure 45 became more intense, I began to send Soul Bowl my wants list, or casually ask about an particular record during a phone order. Eventually, John said those magic words: why don't you come down to the warehouse and have a look around for yourself. This was music to my ears and for the next few days I prepared for the visit, putting together my list of things to look for and simultaneously finding as much cash that i could muster.

The visit was a record collectors dream, over a million soul 45s in one barn, racked out in label/alphabetical order. FInding so many great records in one place and at great prices. It was so good that i decided to stay for an extra day and make a weekend of it. Records that i bought included Montclairs hey you, Bob & Fred Ill be on my way, revells trent town, sonatas hotline, webs dynamic, paul sindab, voltaires bacone, willie mason kalama, four andantes modo, wendell watts kiss a good thing etc. etc. I came away with over 200 hand-picked records and i remember John saying to me, 'im glad you came, as nobody else wants these kind of records' At that period of the scene, he was right; there wasn't really many collectors looking for obscurities.

On consecutive visits to the warehouse, like many of the djs that ive talked to who took trips there, John had a box of specially selected 45s just for my consideration. Inside those boxes there was always something significantly good, unknown and rare. Some of the titles that came from these visits were: Saints Wigwam, Sensations demanding man, Poets J2, George Pepp, Appointments Delite, Love is alright acetate, Hank Hodge eye for an eye.

On one occasion i asked John about a record by the Imperial Cs on Phil la Soul, which has appeared on the main sales list the week before; "what's it like", I asked? John's reply was, "give it a play", as it didn't sell and was still in the sales box. Price was £8 and the rest is history!

Countless other collectors will have similar memories to these that I've described and it would be great to hear about them too.

It's hard to describe the impact Soul Bowl has had on the world of Soul collecting, but it is immense. I haven't even touched upon the stories of their UK wholesale operation, or their substantial sales overseas (including the legendary Japanese lists) and maybe someone else can expand upon these anecdotes following this article. For me, Soul Bowl was the lodestar in discovering the beauty and diversity of American Soul music. 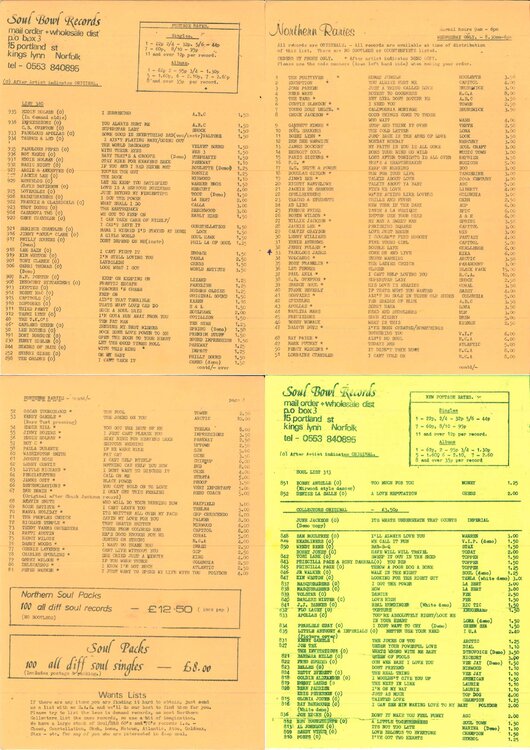 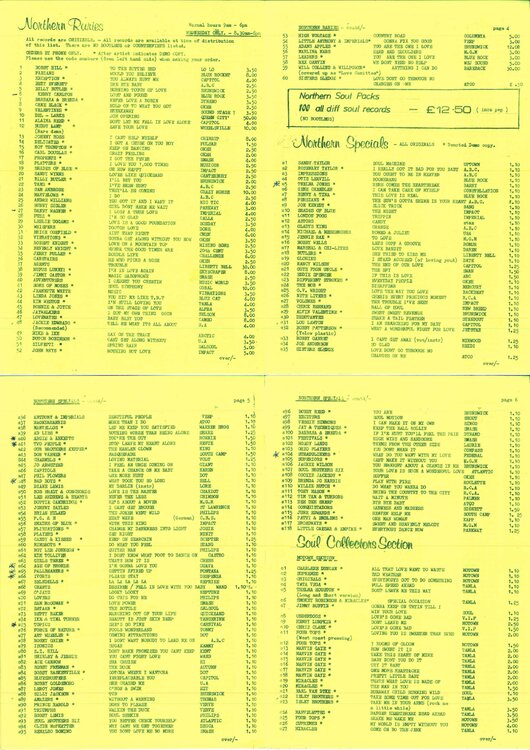 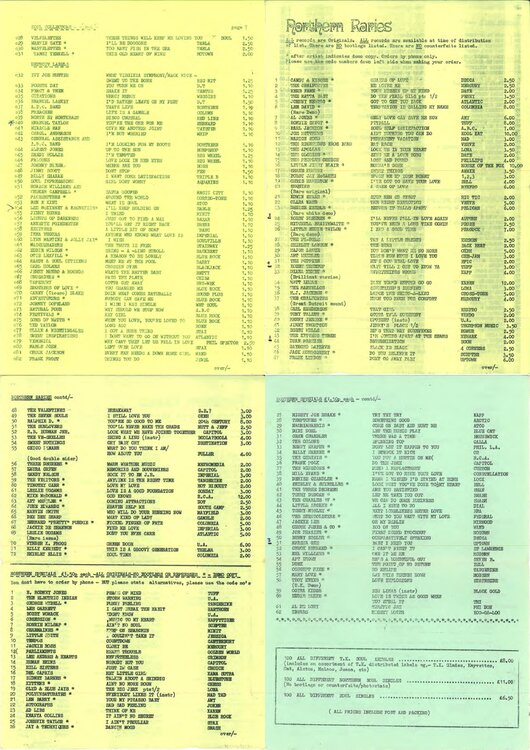